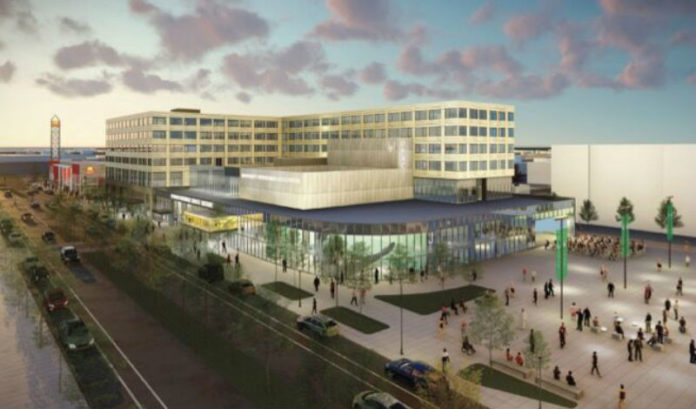 The latest planned projects at University Place on the campus of NJCU include University PAC, a state-of-the art theater, and the Center for Music, Dance and Theater, a cutting-edge academic complex for instruction in the performing arts.

The $90 million development project, the seventh at University Place, also will include three large restaurants and 160 market-rate rental apartments.

Here’s how the project breaks down:

Restaurants: More than 12,000 square feet, divided into three separate restaurant spaces, one of which is adjacent and open to the PAC grand lobby, to provide food service and catering for performances and special events.

University Place is a $400 million project located along West Side Avenue and University Place Boulevard that is intended to create a college town atmosphere for New Jersey City University. It is being developed by Anthony Bastardi, chairman and CEO of Strategic Development Group.

When finished, the 22-acre college town will feature retail, commercial and residential components that will generate ratables for the city as well as university facilities including a residence hall, the new performance arts buildings and an outdoor performance space.

It will also have 790 rental apartments for more than 1,500 residents and students, approximately 100,000 square feet of retail space, including a ShopRite, five large restaurants and other retail shops.

Bastardi has led several innovative redevelopment projects in Jersey City that are transforming neighborhoods by pairing amenities for the city’s two universities with tax-generating benefits for area residents.

Bastardi said he helps universities look at underdeveloped properties in a new light.

“For years, these properties have been underutilized,” he said. “I’m the big picture guy on these projects. Quite often, university leadership does not have the time nor experience to focus on underutilized real assets. When I look at land, I don’t see what is. I see what can be.”

Currently, University Place comprises seven large-scale developments in various stages of planning, design, construction and occupancy.  The first of these is University Place Village, a residence hall that is three years old, where more than 400 NJCU undergraduate students currently live.

The second of these new developments, Rivet, is a mixed-use, rental apartments and retail project, which recently received the 2018 ULI NNJ Excellence Awards for Public/Private Partnerships. Developed by a joint venture between Claremont Construction Group and The Hampshire Companies, more than 70 of Rivet’s 163 rental apartments are now occupied. A Five Guys restaurant is the first of five retailers that will open soon.

The third new development, a $50 million rental apartments project now under construction on Block 5B, is being developed by KKF University Enterprises. The project is halfway through construction, is located between the Village and Rivet, and is planned to open in October 2019.

The fourth new development, the second by the Claremont/Hampshire joint venture, will break ground before year’s end on a $50 million mixed-use rental apartment and retail project. It will be constructed on Block 2.

The fifth new development, the second by KKF, will break ground in early 2019 on a $50  million residential rental apartments project to be constructed on Block 1.

The sixth new development, a Shop Rite supermarket will break ground in fall 2019, fronting on Route 440 and University Place Boulevard, with completion anticipated in early 2021.