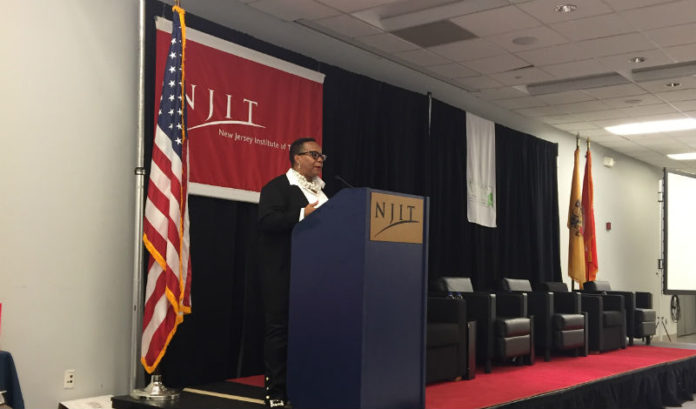 Marjorie Perry commanded the room. She always does.

And it’s not just because she is the head of one of the most successful construction companies in the state, MZM Construction Services. It’s because she has practiced what she was preaching to the audience on how to be an effective leader and speaker.

On this day, it was the keynote address at the Women in Construction & Utilities Industry Summit held in Newark at the New Jersey Institute of Technology and sponsored by the school, Raritan Valley Community College and the New Jersey Department of Labor and Workforce Development.

With that in mind, Perry tailored her speech to the crowd.

“If you’re going to work with men, stop whining,” she said. “They don’t like it.

“If you’re going to go out there and play, you’ve got to go out there with your confidence and your strength and your power and know what you’re doing. Even if they give you a little bit of struggle in the first five minutes, what they’ll do is learn to respect you.”

Respect, she said, is earned in construction. And it’s given to those who know their stuff, regardless of gender.

And you learn it from anyone and everyone, Perry said.

Women, Perry said, are starting to make moves in the industry.

“For the next three years, construction is predicted to grow 3 percent, with $50 billion dollars’ worth of work coming online,” she said. “I didn’t say male or female, I just said ‘$50 billion coming online.’ ”

It’s money women need to get a part of, Perry said.

“We’re going to have to start talking to our young people about going into trades, especially women,” she said. “We think something about being blue collar and being in construction is a bad thing, but it’s not. My average guy makes $72 an hour.

“I didn’t know a thing about construction when I first got in it, but I understood the data and the growth and the planning and what it would take to be in an industry that wasn’t so traditional. I got beat up for it in the early days, but now it’s becoming a lot easier for people to step into those shoes.”

With that, Perry described herself.

“I’m audacious,” she started. “I have much tenacity. I have plenty of nerve. I’m powerful. I have a strong backbone. I have gameness. You have to have a little game. I’m much spirit. I’m a hearty hood person. Much grit. Firmness and fearless. You don’t have that, you can’t play in the construction world. You’ve got to have 50 percent of that.

“It’s not a soft game, but it’s a very creative and powerful game.”

C is for Consistency, Cash and Competence:

“You can’t make your first $50,000 and go out and buy a boat. You can’t get on the job and go from apprentice to a journey person in one year. You may start out at $20 an hour, but it’s about the consistency and going back and doing it over and over and over again.”

O is for Opportunities:

“I’ve met seven other women from around the United States in construction doing a minimum of $10 million to $25 million. That’s how much women are starting to move forward and engaging in a world that is not just for men only anymore. So, stay open to opportunities.”

N is for New angles and New ideas:

“I have never seen so many young people that tell me they already know. Please erase that. You don’t know.”

S is for Skillset:

T is for Teachable:

“We just fired three people last week because they’re always telling us what they’re not going to do. There’s no place in our industry, especially as women, if you’re not coachable.”

R is for Resilient:

U is for Unfazed by outside chatter:

“There’s a lot of chatter today. People telling you what you can do, what you can’t do. I can’t tell you how many times I’ve been called the ‘B’ word, the ‘N’ word. I let them get it all out. I’m unfazed by that. Get stronger in your resolve.”

C is for Communication:

“Be clear in your communication. Everybody thinks that everybody else hears what they are saying. Take some classes. You have to sit in a room with 20 other people and understand the style that you’re communicating to. How do you hear what (people) are saying, so you can be an added value to that conversation?”

T is for Time:

“I was just named one of the fastest-growing urban companies in the United States. It took my 20 years to get my award.”

I is for Inspire to be real with people:

“If you don’t want to know the truth, don’t come to me, because I’m going to tell you and keep it real. We don’t have time for anything less than that.”

O is Observation of yourself:

“Know who you are. We live in a world of narcissism, where folks think nothing they do is wrong. We all gave and took from a situation that created an outcome. How do we prepare ourselves to be better and stronger and more real about how we got there? It’s never a one-way story. It’s never a one-way street.”

N is for never say ‘No’ to something new:

“I just got accepted into a Harvard program. I’ve got to learn the next level of mastering leadership.”