Home Lifestyle Kessler, who worked on Roger Ailes case, speak out about it for...
Facebook
Twitter
Linkedin 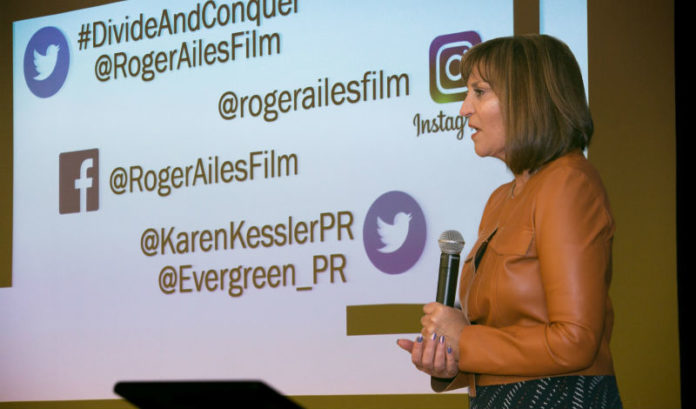 Karen Kessler said she and her colleague, Warren Cooper, found themselves sitting across from Rogers Ailes and his wife Beth in their “war-like” living room in 2016 at the request of a well-known litigator associated with Donald Trump.

“I told him, ‘You know, in the end, all of these cases usually settle because it is not worth the negative publicity and career impact,’ ” Kessler, principal and co-founder of Evergreen Partners, a strategic communications firm in Warren, said. “And when I said that, Beth Ailes jumped out of her chair, furious, and said, ‘We will never settle this case. You need to understand something – Roger is more important than America.’ ”

Known best for her more than 25 years of crisis communications and reputation management in the state, Kessler said she continued with her work as best she could until it became apparent to her what exactly she had been asked there to do.

“As more and more stories have come forward since Roger Ailes, you begin to realize that people like Roger Ailes can’t get away with all of this stuff if there is not a circle of people around them making them look bigger than they are, protecting them legally, scheduling their meetings, getting rid of people who are problems – and that is not us,” Kessler said. “That is why this is the first time we have publicly spoken about this case at all.

“We do not talk about our clients and our clients expect us not to — but, in this case, not only did we not have a contract, a non-disclosure agreement or payment of any kind, but it was wrong and we couldn’t be part of that.”

Kessler and Cooper publicly spoke out about their work with Roger Ailes, the former chairman and CEO of Fox News, in a new documentary entitled “Divide and Conquer: The Story of Roger Ailes” — and even held a screening for nearly 100 invitees at Kean University in Union last week.

Directed by Alexis Bloom, with Alex Gibney, executive producer, and Will Cohen, producer, the documentary — which the team began work on three years ago, prior to Ailes’ death in 2017 — describes the rise of Ailes’ as a persuasive tap dancer, a witty talk show host and even a patriot “kingmaker” for at least three Republican presidents, to his widely-publicized fall as a serial sexual harasser.

“Ordinary people are capable of extraordinary evil,” Bloom said. “But there is humanity in there and that is what we have to accept.”

Cohen said Roger Ailes’ story has become useful in making sense of the present in many ways.

“It felt like a way of dealing with all that is present in contemporary America — the #MeToo momentum, the Trump candidacy, what’s happened to American media — through one man’s story,” he said.

“It is easy to make somebody into a monster,” he said. “It is hard to see that you’re on that path, too.”

The filmmakers early focus on Ailes’ upbringing in the conservative town of Warren, Ohio, where his father, a factory foreman, watched his industry and the town’s pride disappear in the 1970s, humanizes Ailes yet sets the stage for what is to come.

It then details his early career as an ambitious television executive, working as a production assistant in 1961, a producer by 1965 and as an Emmy-award winning executive producer by 1967.

In 1968, Ailes then persuaded Richard Nixon, a presidential candidate, to hire him as his media advisor.

That led to Ailes’ long career in politics and media, often intermixing propaganda film tactics with presidential television appearances and political communications, for a number of senators and congressmen, including Sen. Mitch McConnell, and at least three U.S. presidents, including Nixon, Ronald Reagan and George H.W. Bush.

“In a way, Roger, while being very human, was in the monster-creating business,” Gibney said. “And that is much of what politics is all about — to create a sense that the good people are with us and the bad people are with them.”

Putting politics (slightly) aside, Ailes then became president of CNBC in 1993 and created “America’s Talking” channel in Fort Lee, until a partnership between Microsoft and General Electric’s NBC unit led to the founding of MSNBC in 1996 — leaving Rupert Murdoch, the American-Australian media mogul, to recruit Ailes in creating Fox News, which Ailes used to retaliate against his former employer and stir up outrage — and provide airtime — for those particular audiences who kept the network running.

The documentary paints Ailes as a man who successfully aligned the right-wing party by appealing to the lowest common denominator and consistently manipulating the agenda with the use of fear and paranoia.

“Nothing brought more joy to Roger than a battle,” E. Jean Carroll, former television host of “Ask E. Jean” on the “America’s Talking” channel, said. “And if there was no battle, he would create it.

“Which is what he did with Fox News, dividing us between the conservatives and liberals.”

The filmmakers also focused on Ailes’ constant insecurities which, according to numerous sources within the documentary, made him into a bully who preyed on easy targets — especially women in search of employment and career advancement.

Obsessed with their figures more so than their talents, the stories of how Ailes erased women’s career opportunities if women did not pledge their loyalty and admiration to him through sexual acts are explicitly recalled by numerous female television anchors, reporters and more who worked alongside him.

The film also exemplifies how this sexualized culture became the norm at Fox News, even going so far as to protect cable television host Bill O’Reilly against his first sexual harassment case in 2004 for improved ratings.

“In telling the Roger Ailes story, there is a difference between what is political and what is moral,” Gibney said. “It has to do with the kind of strategies that you use to demonize the other in a very tribal way, which gets at something deeper and more fundamental in what we are all dealing with today.”

In fact, when Glenn Beck left Fox News in 2012, he recalled Ailes’ telling him why he was sticking around despite growing increasingly paranoid, bugging the newsroom, increasing security and carrying a gun.

Ailes then served as a direct consultant for presidential candidate Donald Trump in 2016, before Gretchen Carlson, former Fox News anchor, famously sued him — and earned a $20 million settlement — for sexual harassment.

When more than a dozen more women came forward and the world began to #StandWithGretchen, that is when Murdoch no longer stood behind Ailes, and he was forced to resign a year before his death in 2017.

“We would have been happy to have presented this documentary to him while he was alive, and that was always the intent,” Gibney said. “But it also may have been a harder film to make because he struck fear in so many people that, had he not died, a number of people might not have come forward.”

In many ways, however, Ailes lives on, Gibney added.

“Fox News bears his DNA because a number of people at Fox News are still very much (inspired) by his rhetoric and his way of catching a certain moment,” he said.

Cohen said he unsurprisingly expects a few to respond to this film with a “kind of knee-jerk.”

“But we always saw something in this story that at least would provoke conversation,” he said. “The best we can do is continue to (provide) good, ethical storytelling, (in which) disagreement can be fostered as opposed to the complete shutting down and demonization of the other.”

A wide theatrical release of “Divide and Conquer: The Story of Roger Ailes” is scheduled for Dec. 7, with more information provided on social media sites using #DivideAndConquer and @RogerAilesFilm.

Still, no words in the film prove truer than those of Ailes himself:

“If your audience likes you, they’ll forgive just about everything else you do wrong.”

This week’s A.C. Airshow will be salute to veterans — and...