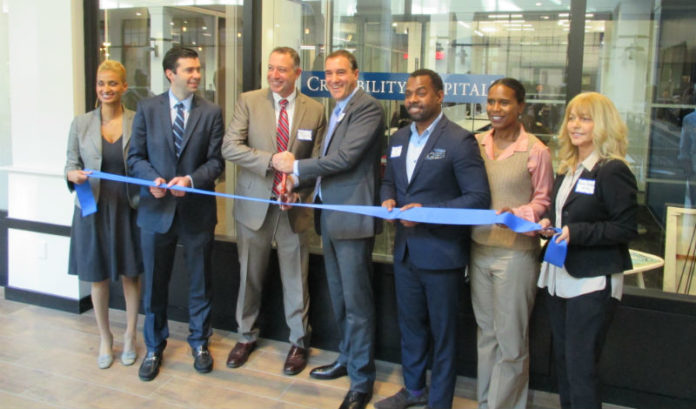 Two New Jersey natives brought their business back to their home base Thursday.

Credibility Capital, a fintech company formerly based in Midtown Manhattan, officially opened its new offices in Newark on the second floor of the historic downtown Hahne & Co. building with a ribbon-cutting ceremony.

Brett Baris and Mark Rambler, co-founders and CEOs of Credibility Capital and New Jersey natives, said the revitalization of Newark was a big reason they are making the move.

“It’s a strong feeling and we’re proud to be associated with it. Looking forward, we’re excited to become more involved in the local community.”

The company was awarded a $6.5 million tax incentive from the New Jersey Economic Development Authority’s Grow NJ program. As part of the deal, Credibility Capital is expected to bring 50 new jobs to Newark within the next few years.

Baris told ROI that, ideally, these jobs will be filled within two years.

“Grow NJ incentive will provide us with the platform we need to help more small businesses across the country,” Baris said.

Tim Sullivan, the CEO of the NJEDA, said incentives strengthen the state’s competitive edge in the increasingly global marketplace.

“Gov. (Phil) Murphy’s take and our team’s take is that incentives have to (be) apart of the tool kit,” Sullivan said to the crowd of about 45 employees, business leaders and local government.

“As we roll forward, we’re looking to expand and diversify that tool kit, so we have more things to put on the table that makes New Jersey a competitive place to be.”

Baris and Rambler, who co-founded Credibility Capital in 2013, set up their headquarters in Midtown South Manhattan as a technology-enabled lending platform that offers a comprehensive set of financing products to qualified small businesses.

The platform, they said, matches small businesses with investors to fund loans from $10,000 to $350,000 for terms of 1-3 years that are intended to help those small businesses grow. Their investors include banks, hedge funds, family offices and insurance companies.

According to Baris, Credibility Capital has provided over $85 million of capital to small businesses since 2015.

“(We) try to educate small businesses, tell them about our product versus other products,” he said. “But we’re always up front about what our product truly is, and we’re really proud of that.”

The company comes at a time of increased revitalization in Newark, especially downtown.

The Hahne & Co. building, a modern multipurpose building used for co-working space, restaurants and residences, has been a relevant part of it.

The building, originally the flagship store for Hahne and Co., reopened in January 2017 with a mix of tenants such as LaunchPad and City National Bank on the same floor as Credibility Capital.

The Hahne building was abandoned for 30 years before being restored by L+M, Prudential and Goldman Sachs UIG.

Buildings like Hahne and One Theater Square are now important to the downtown community, particularly for commercial real estate and housing options, Sullivan said.

With Military Park and the NJ Transit Newark Broad Street station stop within walking distance, Sullivan said the Hahne & Co. building has become an emblem for the area’s activity, excitement and rebirth.

“There are so many great signs of momentum of all the great things happening in Newark,” he said. “Choosing New Jersey, choosing Newark, and choosing to locate in wonderful spaces like this. Attracting credibility (for Newark) and bringing this building back to life. Investing in our cities and investing in our downtowns.”

Realogy to sell its global relocation business for $400M to SIRVA