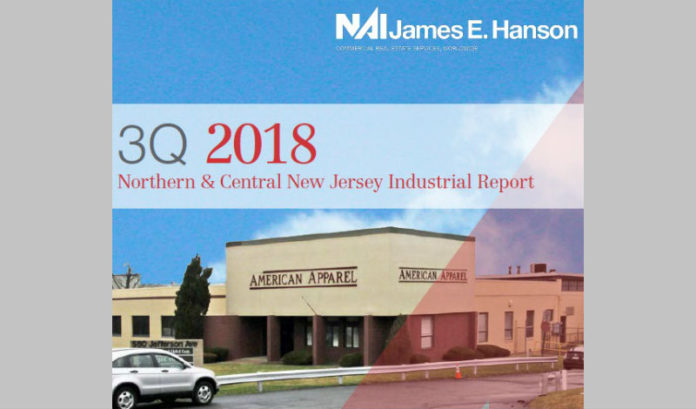 Industrial prices in the Bergen, Essex and Hudson markets have hit record numbers and are driving continued growth to the west, north and south, according to NAI James E. Hanson‘s 3Q 2018 Northern and Central New Jersey Industrial Market Report.

“It is obvious from the data that the northern and central New Jersey industrial market is well-positioned for continued strength throughout 2018 and into 2019,” Kristen Jost, research director for NAI James E. Hanson, said. “A lack of development opportunities and elevated construction costs paired with heavy demand throughout the region will mean that the pricing increases and vacancy rate decreases we have seen across the region for many consecutive quarters will continue well into the foreseeable future.”

The Ports submarket has shown resiliency in the third quarter, despite international trade uncertainties and geopolitical developments. It is the largest market, NAI Hanson said, with 138.8 million square feet of rentable building area. However, it has a high number of Class B, C and D spaces and limited Class A space available, creating stress for demand of Class A and pushing vacancy rates lower over the past few quarters. Vacancy rates are down by 40 basis points since the last quarter (3.9 percent) with an increase from the last quarter of $0.46 per-square-foot in asking rates to $8.08 per-square-foot.

“Although uncertainty continues to define the international trade conversation well into 2018, we have not seen a corresponding decline in the demand for industrial space in the Ports submarket,” Russell Verducci, vice president at NAI Hanson, said. “We know that companies do not look forward to uncertainty in this area of business as it deeply impacts their bottom lines, but the overall fundamentals of the international shipping system remain strong and have contributed to a robust market in the Ports area that shows no signs of abating.”

Pricing and low vacancy rates are hitting record numbers, NAI Hason said, which in turn is creating new industrial markets to the west and north.

In the Warren and Sussex submarket, there is approximately 2.2 million square feet of industrial space under construction. This shows an increase in investor and tenant interest in the state’s most northern and western market, NAI Hanson said. Although this submarket had one of the highest vacancy rates at 9.1 percent in Q3 2017, it has seen a decline with the current rate of 4.3 percent. The market has also seen an increase in pricing to $5.26 per-square-foot, an increase of $0.14 per-square-foot from Q3 2017.

“The emergence of secondary industrial markets like Warren and Sussex speaks directly to industrial users’ continual search for space that is both highly accessible and well-priced as well as investors’ search for large-scale industrial development opportunities,” John J. Schilp, senior vice president at NAI Hanson, said. “With an abundance of land and several significant east-west transportation arteries, this submarket provides both of the key ingredients needed for the successful large-scale industrial construction we are now seeing come to the market.”

Profeta named to board of Newark Beth, Children’s Hospital of N.J.