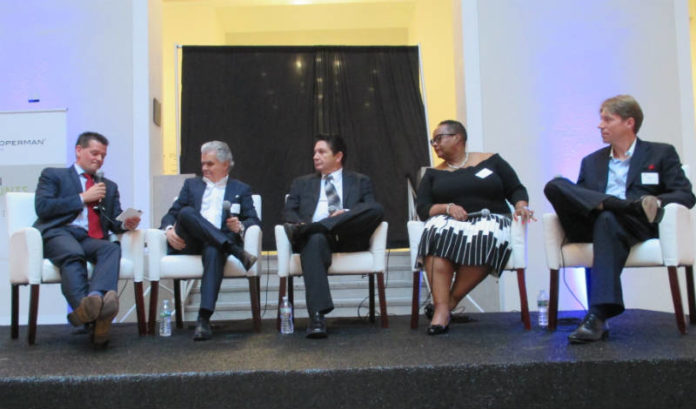 One said leadership stems from setting a vision.

Others said it was about inspiring and motivating your employers.

Another said it was about being able to adapt to changing times.

The true answer: All of the above … and more.

That was the biggest takeaway from 4th annual CEO Evolution sponsored by Citrin Cooperman and Rutgers Business School last week at the Newark Museum.

The panel, moderated by Michael Napolitano, partner at Citrin Cooperman, addressed the question of whether CEOs are born leaders and masterful opportunists or if it’s the culmination of their education, knowledge and experience that’s fueled their evolution.

Scotto, who oversees the Morristown-based restaurant group that now has more than 330 franchised and corporate locations in 38 states and six countries, told the group of more than 100 students, young professionals and seasoned business leaders that he still runs the company based on lessons he learned when Villa was just a single franchise.

“Leadership is many things,” he said. “Even for knee deep bottle washers at a restaurant, leadership is leading by example. It’s showing, it’s doing and it’s organizing.

“Leadership is really setting the goals, setting the vision. Pulling yourself out a little from the day to day and trying to set the vision for one year, two years.”

Scotto is credited with expanding his family’s business into a diversified group of real estate holdings, quick service, fast casual and full-service restaurants. The satisfaction of his customers, Scotto said, is his ultimate success.

For Keiss, leadership has direct correlation with inspiration.

“Leadership to me is the ability to inspire others,” he said. “That ability to have others see your vision of the world is what really makes a great leader.”

Keiss has 13 years of experience through different industries. He has been a founder or investor in at least 12 companies including RST Automation, Pleasant Run Structures, Rainbow Direct, Partners2Market LLC, Swing Safe Inc. and Readington Hop Farm LLC.

Keiss spent two years with the Business, Engineering, Science and Technology (BEST) institute at Rutgers, is an adjunct professor of finance and entrepreneurship at Rutgers Business School and a preferred instructor for the school’s executive education and executive MBA programs.

He said the most challenging part of being a leader is adaptation.

It’s easy to build a product or create solutions, Keiss said. But getting people to use it and bringing the product to market is the hard part, especially when dealing with new technology.

Helping people grow, solve their career problems and realize their potential, Keiss said, is the most rewarding part about what he does.

Tsivgas said motivation, and motivating your employees, is the key to leadership.

“Leadership is creating a vision and a path for this company and then motivating the employees around you to believe in that vision and work with you to see that through,” he said.

Tsivgas’ company, YBC, was founded in 1994 and is operating now as an international computer asset management company. Another immigrant, Tsivgas and his family moved from Greece in 1962.

After going to school and owning a pizzeria, managing a third-party computer maintenance company and operating American Computer Exchange (ACE) for 16 years – a national computer sales and repair company for mainframe computer systems — Tsivgas sold ACE and became vice president of operations for YBC. Tsivgas took over as CEO in 2009 after the recession hurt the business’s profits for several years prior.

Tsivgas was the 2018 Veteran Leader Honoree. Tsivgas is a proud U.S Army Vietnam-era veteran where he served as a 4th class specialist and Airborne Paratrooper with the 509th Combat Support Team. He was on active duty 1973-1977 and in reserves for three years.

Getting appointments and into the same room as C-level people at Fortune 500 companies, Tsivgas said, is the most difficult thing about his job. But once he gets into the room, he said, their success rate is very high.

Adaptability is also key for Perry.

Having a constant thirst for knowledge is the most important characteristic of an effective CEO, Perry said.

“Constantly learning and growing, learning what’s next,” she said.