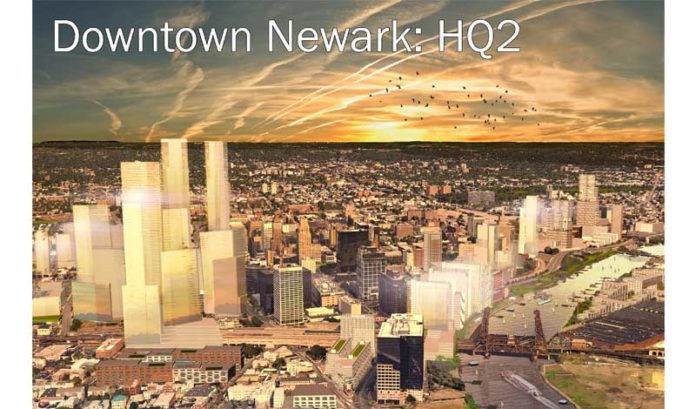 Here’s what happened on the day Newark officially learned it would not be selected as the location of Amazon’s second headquarters:

Newark may have officially lost the bid for Amazon’s HQ2 on Tuesday, but that hasn’t stopped the influx of calls that began after the state’s largest city made the e-commerce giant’s Top 20 finalists earlier this year.

So said Aisha Glover, who now leads the Newark Alliance but who served as the point person for Newark’s Amazon bid as the CEO of the Newark Community Economic Development Corp. And Jose Lozano, the CEO of Choose New Jersey.

Glover and Lozano spoke with ROI-NJ on Tuesday after Amazon announced Crystal City, Virginia, and Long Island City, Queens, as the winners of the HQ2 bid.

The experience gained from the effort was invaluable, both agreed.

“No one expected Newark to be on the shortlist, so it elevates our profile in a way we could not have done otherwise on our own,” Glover said.

Lozano said it had done wonders for Newark’s brand.

“Before Amazon, the New York Times, the Wall Street Journal and the Washington Post were never calling her, talking to her about what Newark can provide,” Lozano said. “So, there has been a lot of organic, natural press because of Amazon putting (Newark) on the list.”

There’s also the fact that media impressions have skyrocketed for the city.

Lozano said that mentions of Newark and Amazon have amounted to 12 billion media impressions since Newark was announced in the Top 20 back in January.

“Anyone would kill for some 12 billion impressions worldwide without spending a dollar,” Lozano said.

Lozano said the race for HQ2 was a good exercise for the state to understand its assets better.

“It was the first time that New Jersey came together from government, higher ed, private sectors, to pull together the necessary data that afforded Newark and New Jersey to be a Top 20 contender,” he said.

And, as a result, the state has been able to use the same pitch it created for Amazon when talking to other companies.

“Everything used for Amazon has been recycled on multiple occasions for multiple companies, from small to Fortune 100 companies,” Lozano said.

“There’s been a steady increase in an interest in Newark because of Amazon,” Lozano said.  “From big tech firms and name-brand companies that would be easily recognizable.

“Folks may be down today, because we lost Amazon, but I don’t think all our doors are closed.”

In fact, there are companies who said they were waiting for Amazon because, if Amazon came to Newark, there may not have been room for them, Lozano said.

Glover said the exercise was indeed a good one for the city, and the momentum that has been built, which has been building since before Amazon, can easily continue.

“All of our coworking and incubator spaces are filled to capacity,” she said. “Some can’t keep up with the inquiries.”

And that’s where the focus for Newark is now: the tech and startup space.

“We’re focused on tech because of our data infrastructure and growing ecosystem like Audible and … Newark Venture Partners,” she said. “Collectively, going to create Newark 2.0.”

Lozano said that, for the state, it has been a moment of reflection.

He added that one thing Amazon hasn’t gotten credit for from the state, amid the HQ2 drama, is its recent announcement of a ninth warehouse.

Amazon’s presence in New Jersey is the largest concentration of warehouses anywhere in the U.S., Lozano said.

In fact, Amazon left New Jersey to go over the river after its eighth warehouse, but, having had a better experience in the Garden State, returned for a ninth, he said.

“Amazon was a really good dry run; it has made us a better business development organization because of Amazon and the drill that Amazon forced us to go through,” Lozano said.

Glover said the interest Newark has received since being shortlisted has completely turned the tables on its outreach efforts.

Where Glover spent her first two years at the Newark CEDC trying to get city officials onto panels at various conferences, she said that, since January, she has instead had to respond to requests for them.

“For a city like Newark, which has struggled with public perception, that cannot be understated,” she said. “(Making the final 20) supported our other business and corporate attraction efforts.

“We’ve seen an uptick in the number of inquiries coming in. I don’t think we’ve even seen the tip of the iceberg of what the impact is going to be from this entire process.”

Read more from ROI-NJ on the Amazon decision:

WBL’s CEO knows effort to craft regulation may be controversial, but...