Home Politics Murphy on Amazon: Newark has raised its game because of the process
Facebook
Twitter
Linkedin 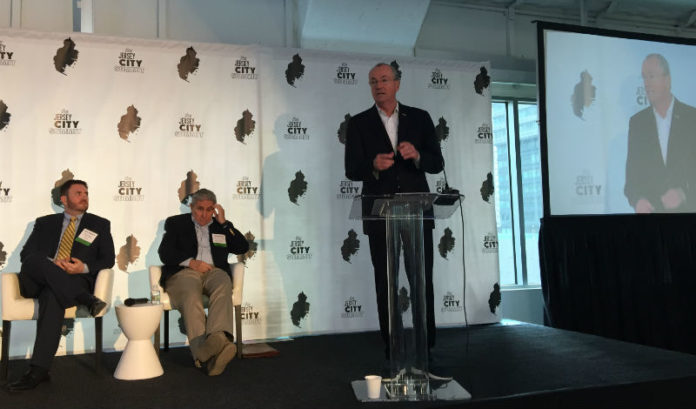 Gov. Phil Murphy always has considered himself a sports guy.

So, when news officially came down that Amazon had not selected Newark for its second headquarters — the much-desired HQ2 project for which Newark was named one of 20 finalists — Murphy let a few sports clichés explain how much the process has helped Newark and will help the city in the future.

In a nutshell, the city went down swinging.

“I think this has been a very good process for Newark,” he said. “One of my colleagues said New York City faces 100 mph fastball every day and Newark hasn’t, historically. Now, Newark has gotten its game up to the point that it is.

Like everyone else, Murphy has hinted how Newark and the state will take advantage of the final 20 spot moving forward.

Murphy, speaking at the Jersey City Summit for Real Estate Investment, was short on specifics.

“(There are) a lot of things that are not ready for prime time or to announce,” he said.

Murphy said the lessons learned cannot yet be fully calculated — doing so, again, with a sports analogy.

“This is an up-and-coming, talent-laden team that made a surprising deep run to the playoffs, that picked up experience that they’ll never forget,” he said. “The talent, the assets they have, are growing, not diminishing.

“I think the best days are ahead. I think there’s a lot to learn from this and to apply going forward.”

“If (they) put a piece of this in Long Island City, I think there’s going to be either direct or indirect benefits for this part of the state,” he said.

The HQ2 project was billed as having the potential to bring 50,000 high-paying jobs and a $5 billion investment from Amazon when it was announced in September 2017.

Newark was named as a finalist in January.

Amazon announced Tuesday that the project will be split between Long Island City, which is part of Queens, and Crystal City, Virginia. It’s unclear how the jobs and investment will be broken up.

Newark Mayor Ras Baraka said the city has benefited tremendously from the experience — and will continue to do so.

“I want to thank Amazon for considering Newark for HQ2,” he said in a statement. “The attention that Amazon brought to Newark by keeping us under consideration down to the wire greatly helped us showcase our city’s unprecedented progress and attractiveness to technology and other businesses.

“News that Newark was a finalist highlighted our key advantages: proximity to New York City at a more affordable cost, access to mass transportation, a talent pool fed by half a dozen colleges and an internet infrastructure that allows Newark to offer the fastest and broadest free outdoor Wi-Fi in the country, development opportunities including land with riverfront and park views, and our diversity, a large African-American and Hispanic population.

“Real estate professionals tell us that other corporations have been taking a look at Newark, and several are strongly considering relocating to the city, since Newark was named as one of the 20 finalists.”

Murphy spokesperson: N.J. has no plans to follow Pa.’s lead and...