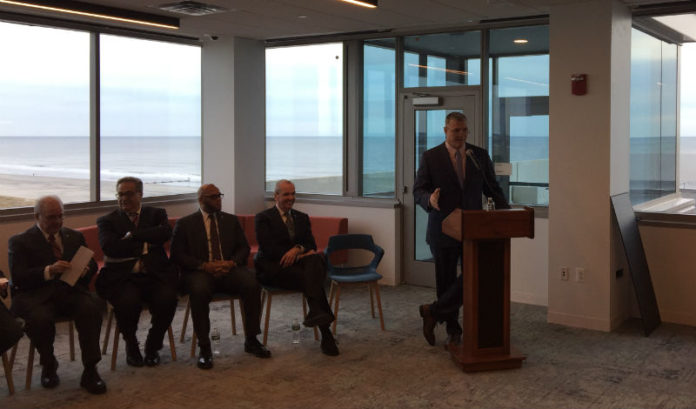 South Jersey Gas cut the ribbon on its new state-of-the-art headquarters that is one of the co-anchors of the Atlantic City Gateway Project.

The building, by all opinions, is fabulous — and beautifully matches the dorms of Stockton University’s Atlantic City campus, its neighbor.

It was about a new neighborhood. And the commitment that South Jersey Industries, the parent company of South Jersey Gas, made to help create that.

“Welcome home,” South Jersey Industries CEO and President Michael Renna said. “This is our home. Our origins are here.”

It hadn’t been, however, for decades.

The South Jersey Gas leadership, starting with now-retired CEO Ed Graham, made the commitment to return to Atlantic City at a time when most of the corporate traffic was going in the other direction.

“Four years ago, the city was in a little bit of trouble,” Renna said. “It seemed like everyone was moving out, casinos were closing and there was not a lot of optimism and hope. We saw an opportunity to come back home.

Just over 200 eventually will work out of the facility. Nearly all are here now; the rest should be by the end of the year, Renna said.

Even more, their presence will be an example of how Atlantic City is changing its economy.

“This was a casino-centric town. We’re now bringing back one of the largest employers in southern Jersey,” Renna said. “There’s a new sense of excitement in Atlantic City and we’re really glad to be a part of it.”

“The great thing,” he said. “(This is) not the first ribbon-cutting in Atlantic City this year. That’s a little point, but a very important point. This is just the latest in string of celebrations that all point to one irrefutable fact: Atlantic City is back.

“This isn’t just another location for South Jersey Gas and Stockton’s new Atlantic City campus, this will be an anchor for an entire neighborhood in this city.”

That’s just the way AC Devco’s Paladino wanted it to be.

“This is certainly one of the most exciting and impactful public-private partnerships that we’ve ever engaged in,” he said. “(There is) 675,000 square feet in one intersection in Atlantic City, which was the important part.

“This really did create critical mass in the Chelsea neighborhood. Our marching orders from Chairman Hanson, right from the beginning, was to start a development program that not only added vitality to the city but proved there was a development option where we could use public-private partnerships in Atlantic City.”

Paladino, the architect of so much of the redevelopment of New Brunswick, said he knows firsthand that public-private partnerships cannot work unless a lot of entities truly are willing to partner.

Most of all, he credited South Jersey Gas.

“First to step up was South Jersey Gas, first Ed Graham and then Mike Renna,” he said. “(They) not only committed to return South Jersey Gas employees and headquarters back to the city where it started, but at every turn, they were pragmatic and willing partners.”

The result, Paladino said, is evident.

Just walk outside of the building.

“We have an energized neighborhood,” he said. “It doesn’t much to see it, just come here any day and go across and eat some pizza, you’ll see the tempo of the streets here have really changed.”