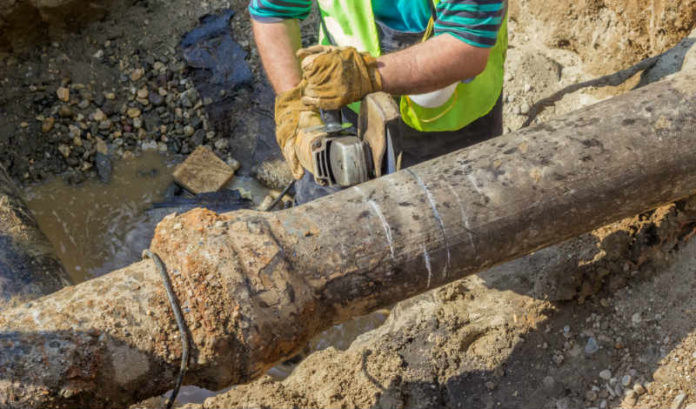 When Greg Lalevee heard about the recent water issue in Newark, his mind wandered back decades.

Back to when Newark was known as the brewery capital of the Northeast, home to all the big-name beers, including Ballantine, where his grandfather worked.

“The whispers were,” Lalevee said, “that the water in Newark was so good that all these brewing companies ran there and set up shop.”

Lalevee, the business manager of IUOE 825 — the union that gets the call when it’s time to work on water issues — does not bring up the memory to disparage Newark.

In fact, Lalevee said Newark is more proactive than most when it comes to upgrading and updating its water lines.

He brings up the breweries because that may have been the last time anyone really thought about the water infrastructure that’s now crumbling under our roads throughout North Jersey.

“It’s a combination of the age of infrastructure and the number of people we have using it,” he said.

Lalevee says it’s the biggest problem no one is talking about.

And for one good reason. Few people see it.

“It’s no different than how we can beat a road to death,” he said. “We’re doing the same thing with water, but because it’s subterranean, you can’t see it.”

Lalevee and his union colleagues see it. And it’s a mess.

Not only are the water mains deteriorating, they are difficult to replace — even if the money can be found to do so.

“When we look at underground infrastructure in New Jersey — and the same goes for New York and Connecticut — there’s gas over water over electric,” he said. “We open up holes around here, and there are seven different pipes or conduits down there. And not all of it is easily located or fixed.

“People put things in years ago without really thinking about when people were going to have to go back in there. That’s the challenge of the underground infrastructure throughout the Northeast.”

Not being seen is only one of the ways water differs from our crumbling infrastructure needs, such as roads, tunnels and bridges.

Figuring out who controls the water is a challenge unlike any other.

“It’s kind of like herding cats,” Lalevee said. “There are so many parties involved. Some water is owned by the town, others by the region. Some is private.

“You can go from town to town down a line and have a different water authority.”

Finding a solution is imperative, he said. And far more cost-effective than responding to emergencies.

“It’s a testament to aging infrastructure,” Lalevee said. “We’ll go in and fix the main line that breaks and what happens? It finds the next weakest link. That’s just going to continue to happen. This is the difference between fixing things on an urgent basis and understanding that the infrastructure is old and that we need to plan out a solution.”

The problems, Lalevee said, are not going away.

“We need a plan of attack,” he said. “Look at Hoboken: How many times are we going to wake up, turn on the TV and see a water main break in the streets and commuters at the PATH station, sloshing through 8 inches of water to make their commute, and not think that we have to come up with a systematic way to address this?”

That’s why Lalevee said there could be a silver lining to the water issue in Newark.

“Any issue with water will hopefully make other people sit up and say, ‘How’s our water system?’” he said. “The fact the discussion is even happening is a good thing. There’s needs to be some planning and upgrading and updating — and the sooner the better.”

Don’t be confused, 825 doesn’t mind the work. Lalevee, however, just puts the needs of the state above everything else.

“Our guys respond to every emergency,” he said. “On one hand, it’s a ton of overtime when you get shaken out of bed in the middle of the night.

“But that’s no way to run a water system.”

It’s been too long, Lalevee said, since water was a priority.

Izzo from COP26: ‘There is clear momentum internationally to do more’