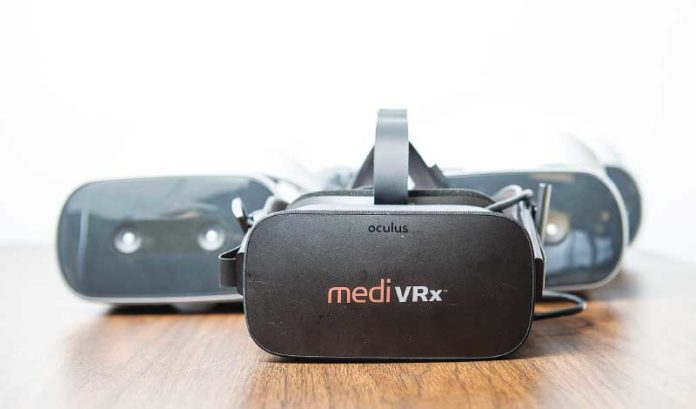 The reality is here: Technology that transports people to a virtual environment is starting to make inroads into doctor’s offices.

There are a number of companies now attracting attention for coming up with virtual reality, or VR, solutions for clinical settings. And among those trailblazers is a 36-year-old Hasbrouck Heights company that started with a business that was anything but technological.

MediSolutions, led by Erez Lapsker, now has a vision for getting people to better understand what’s going on in their bodies by putting them inside. The storied company is developing a platform, MediVRx, that immerses patients in a VR learning experience that involves traveling through skin, bones and arteries.

“When I saw virtual reality come out, as far as I was concerned, I saw what seemed to be the ultimate platform for teaching quality information in the health care community,” Lapsker said. “Now, we view this as not only a way to enable people to learn to live with their disease, but something we’d love to be able to do is help them prevent diseases with it, as well.”

MediSolutions, formerly MediScripts, started with the incredibly simple, yet revolutionary, idea of his father, Joshua Lapsker. He thought every fifth page of a physician’s prescription pad could be a drug promotion that updated doctors on the medications they were directing patients to take.

The company’s first-ever advertisements in prescription pads solved some of the once-existing problems with pharmaceutical promotions.

“There was no way for pharmaceutical companies to ensure physicians were getting their advertisements in front of them,” he said. “But with advertisements on prescription pads — used all day with patients — you can guarantee it.”

The solution became a proven model as it was introduced to physicians nationwide, Lapsker added. He boasted that the life science companies that sought brand loyalty through the company’s advertising service achieved an impressive return on investment. As a result, the amount of prescription pads promotions produced by the company scaled up to the millions.

Those pharmaceutical clients still make for a healthy business at MediSolutions. But some of the trends on the horizon in the industry might make for a tough pill to swallow, such as the move away from paper prescription pads as technology allows for that information to get filed electronically.

For that and other reasons, the company is pivoting to technology itself.

Besides recently changing its name to position the company as a more inclusive multichannel advertising network, MediSolutions is turning its attention to participating in the growing field of VR.

“If you’re training to be a surgeon today, you’ll probably encounter it,” he said. “But there are not many patient-oriented solutions; nothing focused on educating patients and also allowing for continuing education for them and their physicians. But the relationship between medical practitioners and patients is the bread and butter of health care.”

The problem for many years, Lapsker explained, was that available VR technology was just too unwieldy for health care settings.

“There were so many wires on early models and other restrictions that made it not the best scenario for physicians busy delivering health care,” he said. “But the newest models are more mobile, and in a better format to present to patients and physicians. It can be used by patients an intuitive and easy way now to get immersive engaging experience to better understand what’s happening in their bodies.”

Given that, MediSolutions is utilizing the latest virtual reality devices to offer an in-practice VR tool for patient education and support. An early version of the technology is being tested with a group of physicians at an in-state university hospital that Lapsker couldn’t divulge the name of.

Lapsker explained that how it currently works is physicians select patient-specific content from a library of educational VR content based on a prescribed care plan.

More than just putting a headset on a patient for a fun, new experience, Lapsker expects VR education will prove to be effective in helping patients manage health conditions outside of the practice setting.

“Otherwise, when you leave a practice, you get a pamphlet or a website to go to,” he said. “I think this is a much deeper level of engagement. We believe it’ll show incredible results.”

In support of Lapsker’s point, various studies have reported that VR might be able to deliver information in a way that people retain better than they do with other mediums.

Although it’s outside the purview of what MediSolutions is doing, Lapsker said VR is showing some convincing efficacy in studies of it involving patients confronting PTSD or other anxiety disorders. It’s also being put to use by children with autism.

Lapsker thinks the applications of VR to the health care industry will only continue to gain traction.

“I’ve always been one for looking to the future to use disruptive technology to make a difference in peoples’ lives,” Lapsker said. “The future is still evolving. Virtual reality has its usages that are just now being explored. In five to 10 years, augmented reality may have an even larger position.”

Augmented reality, or AR, adds graphics and various other effects to the natural world as it exists through devices such as Google Glass or mobile phones. Lapsker said AR tools are currently lagging behind what would be needed for the health care sector’s uses, but that won’t be true for long.

Rather than being afraid of how these technologies might disrupt the practice of health care in the long term, Lapsker believes clinicians are the most eager to get their hands on it.

“These technologies have a lot of doctors excited,” he said. “From a physician perspective, it sparks a lot of ideas for them and they feel like they’re part of the future as they see it.”

Erez Lapsker of MediSolutions said his father’s invention, which recently earned him an innovation accolade by medical publication PM360, was not only inspired by pharmaceutical clients coming to him for ideas on how to better reach physicians, but also by doctors who didn’t want wasteful advertising.

“Because you have to use these prescription pads anyways,” he said. “It also had a tremendous impact, because we proved that our style of advertising was not only unique, but provided a perfect tool for exposing physicians to useful information about products that could benefit patients.”

But the nature of this kind of advertising changed quite a bit about a decade ago, when a national health care trade group, PhRMA, released code of conduct guidelines that discouraged materials with a pharmaceutical logo being provided free to physicians.

“So, we quickly had to turn around and make (our prescription pads) into a subscription service to stay compliant with PhRMA’s rules,” he said. “Thankfully, this didn’t hurt us too much because doctors didn’t hesitate to sign up. We have loyal customers that really see the value in it — and that’s a testament to the quality of our service and products throughout the years.”

We’re 3 months from COVID’s peak — and statistical drop is...