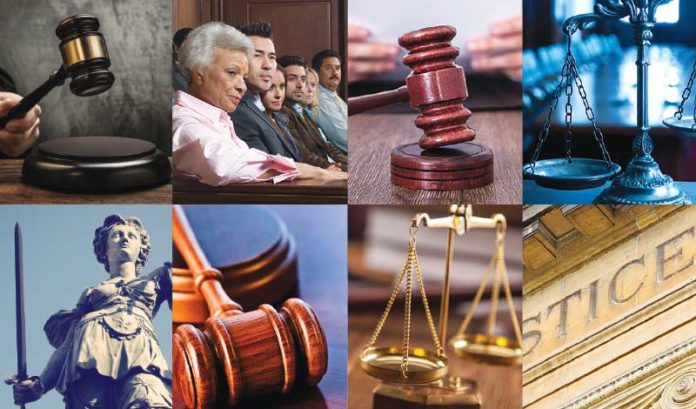 Anyone who has sat within several feet of a television set between the hours of 9 a.m. and 3 p.m. is bound to have heard the line, soundtracked sometimes by foreboding music, prefaced always with an ominous “Attention.”

“If you or a loved one has been diagnosed with mesothelioma …”

It’s more than a stretch, but, in some minor way, you can blame Mark Eveland for that daytime pleasure.

The co-founder and CEO of Verus LLC was among the pioneers of what’s referred to as the original mass tort, asbestos personal injury claims. He’s associated with a group of legal experts that engineered some of the first-ever mass tort settlements in this area and disbursed more than $6 billion in settlement funds and expenses in the process.

The area of mass tort, which is a large number of lawsuits consolidated into one legal action rather than separate lawsuits due to the amount of plaintiffs and defendants involved, has been big in New Jersey. The state has one of the most active legal dockets for these cases, and it houses a significant portion of the firms specializing in it.

It’s an area of law that’s changing, but those involved in it don’t think it’s losing relevance.

Nevertheless, those changes are being experienced firsthand by Verus, a Princeton firm that can’t be blamed for the TV commercials, which also aren’t going away.

Things were changing even back when the firm launched in 2003. Asbestos companies were filing for bankruptcy protection left and right, shielding them from future lawsuits. So, Verus looked to manage the different caches that were being created in the wake of those bankruptcies. Those settlement trust funds, which the firm now manages close to half of, pay current and future asbestos claims.

The issue today is simple: Asbestos fell out of use in the late ’70s and early ’80s. So, although the reported delay between exposure and the development of cancer has kept mesothelioma cases steady over time, the number of asbestos-related injuries isn’t on its way up.

“We’ve had a stable amount of asbestos cases from malignancies that are arising now,” Eveland said. “But the number of cases is nowhere near what it was 10 years ago, because the amount of nonmalignant claims — such as someone with impaired breathing — has fallen off.”

Starting about three years ago, Verus has had to start considering how its team’s skillset could be applied to some work outside asbestos-related mass tort. Late last summer, it launched a new technology product specifically designed with other types of mass tort in mind.

It’s looking to medical devices and pharmaceuticals as the future of wide-sweeping lawsuits. So, the firm’s proprietary platform helps streamline the review of medical records and other data that once was available only as stacks of paperwork.

“Data can be gathered quickly electronically these days, but that doesn’t mean it’s accurate,” he said. “So, what we do is also make sure the data — something like proof of usage of a medical product — is right, so that the litigating parties can trust it and make decisions based on it.”

So far, none of the current examples of mass tort involving medical devices or pharmaceuticals, such as litigation involving the alleged health effects of talcum powder or hip and knee implants, have matched the scope of asbestos-involved injury claims.

But Eveland has his eye on one phenomenon that could grow to that scale: the use of opioids.

“That’s the one that could eventually get to the size and scale of what we saw with asbestos,” he said. “The addiction rates among people taking them have been so significant, and the amount of individuals taking them and suffering significant damage or death as a result of overdoses is enormous.”

Another emerging area of mass tort might be human trafficking, Eveland said, citing the signing of the Allow States and Victims to Fight Online Sex Trafficking Act earlier this year.

“That law made the tools the government and lawyers have to pursue litigation of this much stronger,” he said. “If I were to read from the tea leaves, I’d say that companies with online platforms that host or somehow enable people advertising prostitution could have a significant number of lawsuits brought against them.”

Just as Eveland speculates about how mass tort might be expanded, he’s aware that there are some political winds moving in the other direction.

There are two sides to every story, as he says himself. And there’s a lot of lobbying being done to clamp down on mass tort on the legislative level.

“So, there could be some mass tort reform initiatives signed into law that make it more difficult to pursue these cases,” he said. “For mass tort lawyers, that just means finding new ways in helping the injured achieve justice. This area of law will never disappear, but it might look different.”

Do the ads work?

So, are those seemingly low-budget television commercials urging anyone with mesothelioma to call without delay actually effective today?

The answer is: surprisingly, yes.

Law firms running these advertisements — betrayed as they might be by production values that won’t win any awards — are identifying affected people and targeting them through modern data science in increasingly sophisticated ways, according to Mark Eveland of Verus LLC.

“The granular level of detail and the rapidity at which these advertisers can make decisions on where and when to run ads has really amped up,” he said. “So, if you see an ad on CNN at a certain time, chances are they’ve got data that makes them certain they’ll get a higher response rate than if they ran it on a TV Land rerun of ‘Gunsmoke.’”

But law firms aren’t limiting themselves to television when looking for potential clients.

“These days, it has become common for law firms to find people who have been injured by leveraging social media platforms and online advertisements — instead of just billboards, newspapers and television advertisements,” Eveland said.