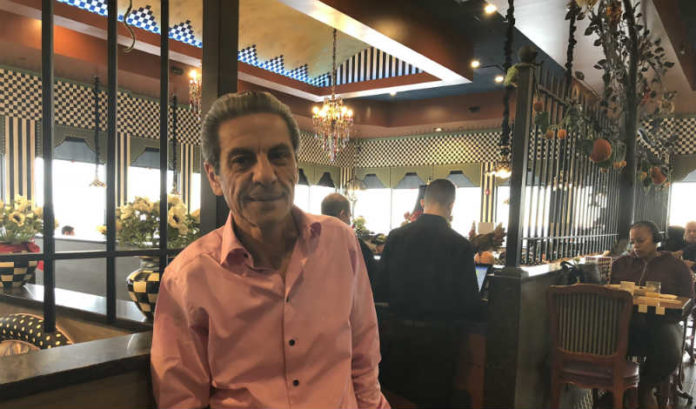 For owner Gus Katsanos, it was easy to explain why the Chit Chat Diner in West Orange took in 80 cold and hungry students who had been trapped for hours on buses last Thursday during the storm that brought traffic to a standstill — and easy to explain why he fed them and housed them until midnight, free of charge.

“They could have been my kids,” he said.

Katsanos, speaking over a packed house at his diner Sunday afternoon, said he’s been a little overwhelmed by the reaction to his actions.

“People have been calling, people have mentioned it when they come in,” he said.

The gesture clearly has touched the hearts of many Jerseyans.

The story of the diner’s efforts (read it here) almost instantly became the most-read in the history of the ROI-NJ website.

One New Jerseyan, in fact, was so moved, he felt the need to thank Katsanos personally for his efforts, driving up from his Shore home to do so: Gov. Phil Murphy made the drive to West Orange on Friday.

“He was very nice and very thankful for what we did,” Katsanos said. “He thanked me and the staff and spent time talking to the customers.

“I think he did the right thing by coming. It made a good impression on the parents here.”

Murphy was touched when he read about the account, according to Dan Bryan, his press secretary and deputy communications director.

“The governor was deeply moved by the generosity and selfless spirit of the Chit Chat Diner staff,” Bryan said. “He made it a priority to visit and personally thank those who decided to forgo their own plans and put others before themselves during the storm.”

The mayor of West Orange, Robert Parisi, stopped by, too, also expressing his gratitude, Katsanos said.

Parisi, Katsanos said, is a regular.

As are plenty of others. At noon Sunday, there was a 20-minute wait for a table in an establishment that seats 180.

Katsanos said he’s been thrilled by how quickly West Orange has taken to the diner, which opened in August.

Of course, Katsanos knows a thing or two about the business.

He’s worked in the restaurant industry since 1978, starting in Manhattan. Ten years ago, he bought the Chit Chat Diner in Hackensack with his brother-in-law.

In 2017, he bought the Eagle Rock Diner, which had been closed since 2015, and completely renovated the restaurant.

“We knocked down the old one and built a new one,” he said.

And, while his generosity last Thursday certainly was appreciated by the town, Katsanos said the gesture was more about being a parent than a business owner.

As someone who has three kids and eight grandchildren, Katsanos said he knows full well the importance of communities looking out for — and looking after — the next generation.

“These kids were cold and hungry,” he said. “They were overtired. We were happy to help out.”

“That night wasn’t about money,” he said.

Katsanos said he was grateful for the attention the Chit Chat Diner has received, but he knows it will soon fade.

“We’re not just here for a day, we’re going to be here every day,” he said.

Many parents in West Orange were happy he was there last Thursday.