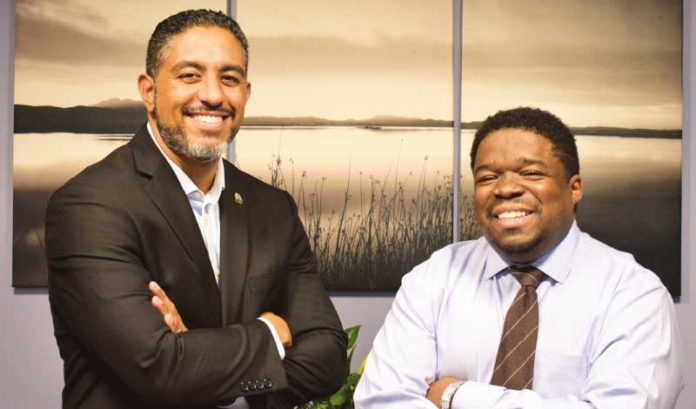 Rafael Mata remembers what it was like to be invisible to the government.

He had never successfully won a government contract bid.

Which is why Mata was surprised when Hudson County Executive Tom DeGise, in the fall of 2016, told Mata he wanted him to be in charge of increasing the county’s spend with minority small business owners.

Excited but nervous, Mata and Jermaine Pharmes, diversity and inclusion compliance manager, began an aggressive cold call campaign with their team to get in touch with as many businesses as possible.

Mata said he expected the doubt and mistrust of the small business owners — jaded from years of government programs that produced little or no results.

But he didn’t expect his office, the Hudson County Office of Business Opportunity, to be reported as a scam.

Mata can laugh about it now.

“We were getting bundled in with, I would, say employee or employment regulation and not necessarily economic development and business opportunity,” he said.

Because Mata and his team were so aggressive with their outreach — calling eligible companies that had not registered with or been certified for working with the county, at all possible hours of the day — they were hung up on and reported to county authorities as scam calls.

Especially since what they were pitching was that the county government had money to spend and wanted to spend it on their business.

“The government, in small business, is not seen as an outreach vehicle,” he said. “So, calling after 4:30 p.m. is unheard of.

Through the OBO, Hudson County now has a 10 percent set aside for government contracts for minority small businesses.

The numbers from the first year weren’t as great as Mata was hoping for — the organization was able to distribute $1.8 million in grants to women-, veteran- and minority-owned businesses in 2017, well under its goal of $4.7 million — but Mata said the process the office is making in the community is undeniable.

Mata and Pharmes understood the mistrust of the office.

Mata previously worked with the county’s Department of Family Services as a grants manager, and was simultaneously president of a small business consultation firm in Wayne.

Pharmes had years of experience in compliance at the county level.

With their experience, Mata knew their struggle was going to be to balance the need for diversity with maintaining a competitive bidding process. It’s why the 10 percent set-aside program was created.

It isn’t a handout to the businesses, he said. It requires following the existing bidding process. But it does give minority companies a little help.

“What the process that we put in place creates, is (one that) still keeps intact, for purchasing, the competitive environment,” Mata said. “Where the state got in trouble before, and where things get a little sketchy, is when you create these programs and you’re giving contracts just based on the certification.”

The program, Mata said, has stood up to scrutiny and criticisms of prejudice.

That, he said, was a big key to its success.

“(Criticisms have) happened already — and the system that we put in place has survived it,” Mata said. “We’ve gotten complaints even from … the corporations themselves that we’ve been doing (business with) for 10 years or 15 years.”

Mata said the key is finding a fair balance.

“We’re very careful not to be so exclusive that we’re saying, ‘No, we don’t want to do business with any (corporation),’ because, in some instances, depending on the commodity, corporations may be the only ones that could provide the service at a reasonable price,” he said.

“We are dealing with public dollars. So, if somebody local is going to be three times the cost of somebody else, we just can’t do that. It’s not conscionable to do that.”

To be successful, Mata knew he had to fix what used to hinder him.

“A lot of this is born out of that frustration that I experienced as a business owner,” he said. “I really wanted to work with government, especially when I was in construction around the solar panel era, when they were putting a lot of these solar panels up on light poles.

“I remember reading (application documents) and I remember (thinking) it looks like another language. I couldn’t get it and I didn’t know what these budgets were and I just — I was just lost, and it was very frustrating.”

It’s something he is vowing to change.

“Now that I’m on this side of the fence, I don’t forget that, and I try to make things that simple as possible and we’re using every electronic platform that the county will allow to get the word out,” he said.

That includes significant social media outreach, as well as learning how to reach the business owners where they are, rather than calling them out to a county event during the day — when they are trying to run their business.

“Things were we’re planning on for the future are one-minute animated videos that describe what this office does, a YouTube channel with different kind of areas to explain how to do business with the county,” Mata said.

That would include videos explaining what certain acronyms, like RFP, are — request for proposal — and what a funding year is, as well as explain what the mandatory documents and certifications are for doing business with the county.

This, Mata said, would let a small business owner get the information they need at whatever time they have. Like at 2 a.m. after a long day, or at 6 a.m. while drinking coffee on the commute — however it fits into their tight schedules.

“The message you will always hear from us is: ‘Come see us. Let’s hear about what you would like to do, what the vision for your business is and let us help you help guide you to that resource,’” Mata said.

Essex, Bergen and Mercer counties have similar set-aside programs, following the process Hudson created. Bergen was the latest to announce its program, doing so the week of Oct. 22.

Mata said he also has heard from Atlantic and Middlesex counties.

He also knows his work in Hudson is just beginning.

Mata said there is a reason the program is not progressing quite as quickly as he would like: Changing government is difficult.

“We met a lot of challenges because this was a whole paradigm shift,” he said. “The challenge for us was actually implementing it with all these kinds of moving parts here at the county.”

His office had to speak with the purchasing agents of all departments and switch their thinking. But once they bought in the process, and ran everything through the OBO, Mata said reaches his goal is coming into focus.

“All these department directors had now, based on the ordinance, had to run all these purchases through our little office here and there was nothing set up for that,” Mata said.

Creating a more digitalized process, as well as ensuring the 10 percent target is tracked and met, is still a work in progress.

“And that’s primarily because we have such a low number of (registered) minority-, women- and veteran-owned businesses,” Mata said.

That’s the greatest challenge that remains: Breaking through the jaded small business community.

“People have heard the rhetoric, but they’ve never gotten any contracts,” he said. “They’re not mobbing my doors to say, ‘Hey Rafael, how did we get certified? How do we become part of this?’”

Set-asides, after all, are not a new concept.

“Minority, women and veteran businesses have been around forever,” Mata said. “They have been doing very well and they’ve never used those certifications to get to where they are.

“So, there are very competent businesses that have the capacity to do these sorts of bigger projects. They’re just not interested in dealing with the nonsense and bureaucracy of government.”

Mata is out to change that.

Reach the Hudson County Office of Business Opportunity at: hudsonchamber.chambermaster.com or 201-395-6267.

Suburban Propane to use acquisition to increase development of RNG projects