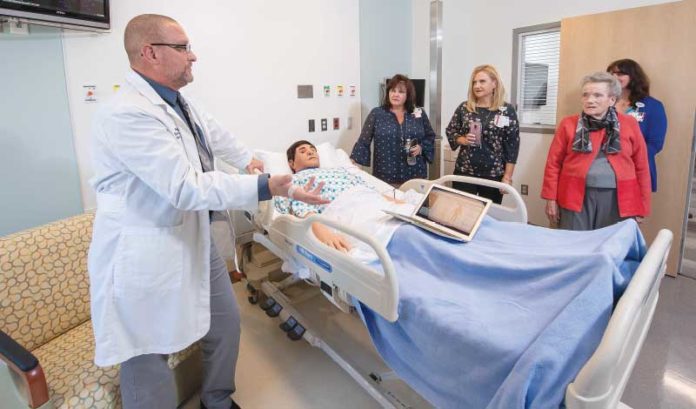 House calls may be a thing of the past — yet patients can feel like the doctor is just in the other room when they are wearing wireless devices that keep tabs on their health metrics at home.

That’s a finding Inspira Health Network made by surveying chronically ill patients’ anxiety levels after one of its many ongoing pilot programs. And that’s only the start of what the South Jersey nonprofit hopes to discover as it begins to test and implement emerging technology.

Besides smart devices such as wireless weight scales and glucometers, Inspira is exploring the clinical applications of digital voice assistants and utilizing artificial intelligence programs that generate algorithms for efficient patient placement — a portent of a future with Amazon’s Alexa stepping in as a virtual nurse and the elimination of waiting rooms from the health care equation.

Technology-wise, the organization has a lot going on. John DiAngelo, CEO and president, couldn’t be happier about that.

His organization celebrated this month the completion of its Innovation Center in the South Jersey Technology Park at Rowan University, which was designed to accelerate the development and implementation of digital tools.

ROI-NJ spoke with DiAngelo about that facility and its place in advancing Inspira’s interaction with cutting-edge technologies.

ROI-NJ: Do you want to start off by talking about the impetus for the Innovation Center in Mullica Hill?

John DiAngelo: I think the Innovation Center, which we just showcased after starting it about a year ago, has allowed our people — anyone affiliated with Inspira — to put forth answers to problems we may have, and do that outside the normal chain of command. The building it’s housed in has various startups and innovation ideas getting run through it constantly. Having the space there at Rowan allows us to better interact with these folks. We’re working with at least one startup very closely. We want to continue working with more, and maybe invest in them along the way.

ROI: Was that outreach to the local innovation economy part of the initial plan, or did you adopt that along the way?

JD: When we first started rolling this out, we were keeping it within our own Inspira family, but, then, we brought in Rowan. Expanding it out even further is really our next step. Our goal is to do what’s best for Inspira, but one of the other things we did is to make it so whatever is developed in the center can be commercialized — and we’ll share revenue with the person who developed it. Before, all the money came to us. Now, we’re sharing it with the person who came up with the idea. As for the center itself, there aren’t many organizations doing this, especially for an organization of our size, a community hospital, you don’t see this very much.

ROI: What all went into the center that you dedicated $1 million to?

JD: Two of the major components of the center are a space where we’ve replicated a hospital bed and a mannequin that can simulate up to about 1,000 different scenarios. So, we can test technologies in the room before they’re put in play in our hospital environment. Another thing we’ve duplicated is a living room, because, as more and more of our patients get discharged to the home and treated there, we want to simulate some of the things we’re talking about to see how it’d work and how patients would handle it. There’s also conference rooms, several of them, because we have groups that will show up regularly to work with teams — going through very viable health care projects and working together on them as a team. Providing these spaces helps keep the development of those projects going. We work with some of the professors at Rowan as well as our own folks to make sure the resources are there for them.

ROI: Do you want to talk about the center’s testing of wearable technologies?

JD: What we’ve done is work with our wellness people to have chronically ill patient get information delivered through wearables, whether it’s a FitBit-style device or something like a wireless scale. We can use that to determine very quickly if there’s a problem by measuring the weight changes. What we used to do before this is, we had a number of people who made phone calls to patients. But we’ve come up with an app that can, among other things, get a patient’s weight in the morning transferred back to our nurses. We have a team that manages it. So, you can tell that way if there’s a problem, to see if they need to be contacted to see a doctor. The goal is to get to patients before they need to come into the hospital. We’re also using wireless glucose monitors. It’s used as the front-end to keep patients well. We’re trying out a lot of wearable tools, interesting pilot programs that we’ve been working with that we’re soon ready to spread across the whole system.

ROI: Have you been able to put technologies tested in your pilot programs to use yet?

JD: Well, there has been one pilot program we’ve done that involves a command center with the purpose of generating quicker throughput in the hospital. A number of people touch a patient when it comes to discharge, transport or other processes. And even though several people are working together to accomplish those tasks, none of the people were really talking to each other to get that done. We’re putting those people together now to make sure they’re communicating, in a command center, which looks like NASA with all the computers everywhere. It’s also a place to utilize some new technologies. The proof in the pudding is, before we did this, we never discharged patients before 11 a.m. Now, we discharge patients, 60 percent of them, before that time.

ROI: How likely is it that something like this new system, in concert with the potential use of AI predictive technologies, could result in patients expecting to skip the waiting room altogether?

JD: We think it’s a very concrete goal to do that in our urgent care centers and doctor’s offices. Already, we allow you to use the app to pull up urgent care centers and check wait times there, but, probably more importantly, you can check in straight from the app. It’s like going to a busy restaurant and being given that buzzer after putting your name down. But, in this situation, you can do it from home, and we’ll send texts out when you’re within a half-hour of needing to be at the facility. So, you can wait at home and we’ll tell you when to come in. We have found that to be a patient satisfier. We’re constantly looking for other ways we can improve patient convenience.

ROI: How has Inspira’s staff and the surrounding community responded to the organization’s emphasis on technology?

JD: I think we’ve got some smart people working here, and I’m always asking them to think outside the box. This is a way to put our money where our mouth is — to help people actually come up with future health care solutions. And it’s great what we’ve seen: Someone shows up and you see the sparkle in their eyes that comes with someone taking them seriously and the ideas they’ve come up with. And, so, I think that, for us, it helps us take us to where we want to go, so I’m looking forward to bringing more folks here to make these advances.

Virtual assistants — Amazon’s Alexa, Google Home and Microsoft’s Cortana — can all tell knock-knock jokes, but is anyone taking them seriously as the future of health care delivery?

Inspira sure is. In its new Innovation Center, the organization is testing the use of these emerging voice-controlled technologies for the management of health conditions at home as well as helping patients in the hospital setting.

“The key to this is that it’s in the concept stage now, because there’s still a lot of concerns about active listening of these devices, especially in a clinical environment with HIPAA,” said Dave Johnson, vice president of innovation at Inspira.

Because of that, these cloud-based devices are still confined to controlled testing environments.

But companies such as Amazon have already started adding health and wellness teams in their digital voice assistant divisions to make these devices more useful in the health care field.

“When we think the HIPAA compliance is there, whether it be with Amazon, Google or Microsoft, we’ll be ready to roll this out,” Johnson said. “And we’ll be able to do that well ahead of the market.”