Home Health Care The Bayada Way: Meet the founder who is giving $20M to his...
Facebook
Twitter
Linkedin 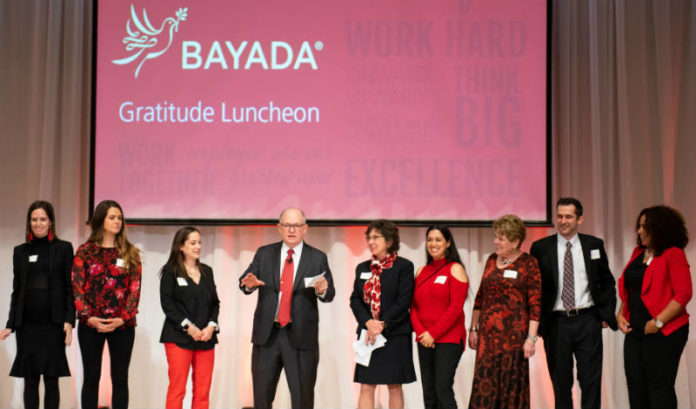 Celebrations that honor employees — just for being good employees — are not unusual at Bayada Home Health Care.

Founder Mark Baiada has been holding such events almost from the time he started his now-$1.4 billion business in Moorestown in 1975.

On this occasion, Baiada announced he was going divide a $20 million gift among the company’s more than 32,000 employees, past and present.

Baiada is calling the checks his Gifts of Gratitude. They’re part of his “Lasting Legacy” campaign at the company, which will become a nonprofit Jan. 1.

“We started 43 years ago, and I’ve always been very fortunate to get a lot of really good people working with me so that we could serve the community and build up the company,” he told ROI-NJ. “I’ve always had gratitude and real appreciation for the people that I’m working with.

“So, just before I give it all away, I said, ‘Let me give some to the employees to really express my appreciation and gratitude for all the work that got us to be a billion-dollar company.’

“It was just a thank you in the spirit of Thanksgiving. We decided to make it a surprise.”

Employees will be awarded a bonus based on how long they have been with the company — even those who just started this week.

“At minimum, everyone will get at least $50,” Baiada said. “In fact, some people will get 50 bucks before they get their first paycheck.”

Baiada also is making sure that past employees are recognized, too.

Anyone who had worked at least 25 years but had left the company since 2010 also will get a check.

“I have a lot of people that put in a lot of time and I want to make sure they’re properly thanked, too,” he said. “It’s really about the spirit of my sentiment and my gratitude rather than the money. But the money is a nice way to do it.”

Matt Gunkel, a registered nurse and field staff supervisor who has worked in the Mount Laurel office for six years, said he was stunned when he heard about the rewards.

“I was going to a luncheon and I expected someone to raise a glass and say some kind words about the holidays,” he said. “I was not expecting this.”

Gunkel, one of 8,500 Bayada employees in New Jersey, quickly added that the idea aligned perfectly with the company’s values.

“Being presented with the money was shocking, but the gesture itself is right in line with the way this family behaves,” he said.

“Top down, it’s the best company I’ve ever worked for: kindness, recognition. It’s everywhere in the company. I thought it was just the office I worked in, but I’ve visited other offices and seen it there, too.

“The culture is second to none.”

Baiada’s act of kindness are legendary in the company.

There are Bayada Bucks, which can be redeemed for gifts, scholarship awards for additional schooling and an emergency fund available, for those facing financial hardships.

Baiada feels that’s the role of the CEO — to take care of the people who are taking care of the company. It’s what he calls “The Bayada Way.”

“We believe our employees are our greatest assets, so it’s just our approach to them,” he said. “We’re thankful for their work, we support and encourage them, we listen to them, respond to them.”

Baiada said workplace flexibility is standard. As are numerous awards.

“We have our Hero of the Quarter program, where each office has a hero who exemplifies The Bayada Way in the spirit of what we do,” he said. “The office winner can then become a division winner, a region winner and then a national winner.”

Once a year, representatives from all of them come together.

“We have an annual awards weekend where we bring everybody together and we give out all the awards and special winners,” Baiada said. “It’s a weekend of appreciation rather than a weekend we are preaching to them and trying to teach them stuff.

“It’s just us saying, ‘Let’s get together and honor the people.’”

Baiada describes the company this way: We provide nursing, rehabilitative, therapeutic hospice and assistive care services to children, adults and seniors worldwide. We care for our clients 24 hours a day, seven days a week.

“So, we’re really a mobile community-based workforce of health care professionals,” he said.

“We went from zero to $1.4 billion with all these employees and across all these states, all while helping to transform health care delivery,” he said. “When I started the business, I didn’t realize I was going to end up with a family and such incredible relationships.”

It’s a company Baiada wants to last for generations.

“We have a written philosophy, and one of our beliefs is, we’re going to leave a lasting legacy,” he said. “That means we’ll be here in 100 years to serve our communities.”

He now feels the best way to do that is to become a nonprofit.

“I’m the sole owner of the company, and I was contemplating its future: What am I going to do?” he said. “I could sell it, but then I just have money. I don’t need it, and that would just undermine The Bayada Way and the spirit of what we’re doing.

“I could give it to my kids, and I have three who work here, but the family is behind us because they realized they couldn’t sustain it 100 years.

“We decided the best way to continue as an organization of lasting value was to go into nonprofit status. So, we’re going to be a self-funded social entrepreneurship, a nonprofit B corporation.”

Doing so, Baiada feels is the best way to keep The Bayada Way going.

Of course, the financial gift to the employees does that, too.

When asked what he’s going to do with his extra holiday cash, Gunkel didn’t hesitate: He’s paying it forward.

“I’m going to be extra generous this year,” he said.