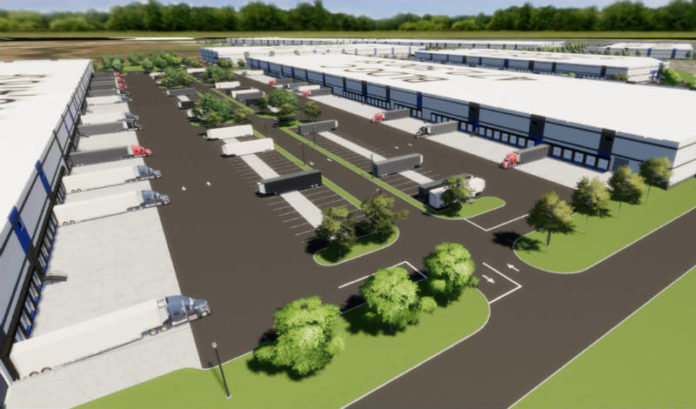 Mindy Lissner said she hasn’t been surprised by the interest.

The CBRE executive vice president said calls have been coming in steadily since CBRE was named as the leasing agent for the Linden Logistics Center, a 4.1 million-square-foot, state-of-the-art logistics park on a 350-acre tract of land in Linden that is being produced in a joint venture of Advance Realty and Greek Development.

“It’s a trophy property in a market that has seen very high demand in the past couple of years,” Lissner said.

Actually, she said, it’s more than that.

While the eight-building park, tentatively scheduled to be ready for its first occupants late in 2020, is centrally located near the Port of New York and New Jersey, Newark Liberty Airport, New York City and all of the region, Lissner said the park’s biggest value may be in its potential.

“At this point in the project, we’ve got flexibility,” she said. “We can accommodate some special-use type of users.

“We have the ability to have above-standard trailer parking or car parking. We have the potential to bring rail to the site and create a rail-served building or serve someone who needs some outside storage. Right now, we have some flexibility in zoning.”

For what type of tenant isn’t as clear.

Lissner said the park will be perfect for the region’s growing e-commerce needs, but she said the size of it will make it attractive to larger users who have been shut out of the region recently.

“There are a lot of large users in the market, more than we’ve seen them in a long time,” she said. “And, New Jersey being what it is, there is an inability to accommodate large users unless those tenants are willing to go considerably farther south or west.

“Historically, we’ve lost a lot of deals over 700,000 square feet to the Lehigh Valley and Central Pennsylvania — and a lot of that has been due to our inability to accommodate those users. So, we’re seeing a lot of activity from those larger users who haven’t had the ability to find a location in New Jersey, especially port-related users.”

Officials from Advance Realty and Greek Development said the Linden Logistics Center will be the largest active industrial development in the Port of New York and New Jersey region and stressed the buildings are being designed to meet the needs of logistics, distribution, fulfillment, manufacturing, last-mile delivery and other modern industrial users.

“New Jersey has long been known for its thriving industrial market, and this first-class development will cater specifically to the fast-growing logistics, distribution and fulfillment businesses that are currently fueling the sector’s growth,” Advance Realty CEO Peter Cocoziello said.

Frank Greek, president of Greek Development, said the project will be transformative.

“With this development, Advance and Greek will create not just one of the largest logistics parks in the New York/New Jersey region, but a venue that can help the area maintain its longstanding position as a leader in the nation’s industrial market,” he said. “As e-commerce, last-mile delivery and other 21st century industries continue to reshape and drive our economy, we are working to ensure they will have truly first-class facilities that help them meet their evolving needs.”

Located off Tremley Point Road, Linden Logistics Center will be situated 10 miles from the Port of New York and New Jersey — the largest port on the East Coast and the third-largest port in the United States — and minutes from the New Jersey Turnpike and Newark Liberty International Airport. The location provides exceptional access to one of the world’s most concentrated and affluent customer bases, with approximately 100 million consumers located within a day’s drive from the property.

Linden Mayor Derek Armstead said he is happy to see the land is finally being utilized.

“I’m excited that Advance Realty and Greek Development see our vision that Linden is the investment of the future,” he said. “This land has been vacant for over 25 years.

“Only when vision and opportunity meet can an incredible project like this happen.”

Lissner and the team at CBRE hope to make it happen. Lissner will work with Executive Vice President William Waxman and be supported by a 10-person team including Tom Sullivan and Kevin Dudley.

“The interest level is very big,” she said. “Typically, in this market, we don’t see a lot of preleasing. It’s the type of market where it’s ‘build it and they will come.’ Once people start to see site work happening, steel going up, that’s when they real activity starts. But I do think we have an opportunity for preleasing here because of the ability to accommodate some non-standard needs.

“The market is excited. We’re getting a lot of inquiries from brokers and some direct response from end users, who are trying to see what our timetable is like. There’s a great buzz in the marketplace because it is so big and so perfectly located and so impactful.

“We’re talking to some real users at this point. In a perfect world, we’re hoping we can structure a deal that we can announce to the market before we began construction.”