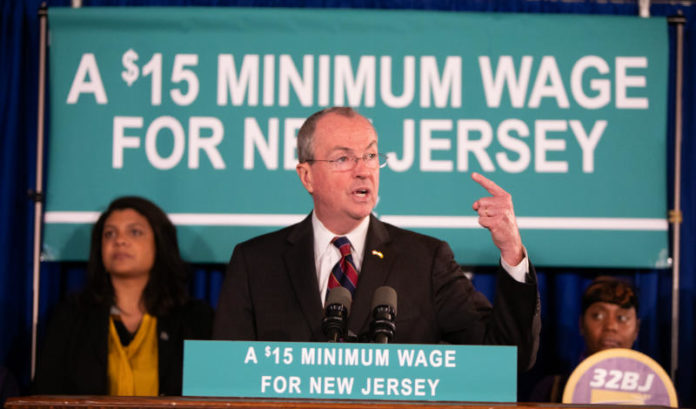 Gov. Phil Murphy held a news conference Monday to call on the Legislature to pass a $15 minimum wage bill before the last voting session this year on Dec. 17.

“We must give our working families the means to be full participants in our economy and in the economic lives of their communities,” Murphy said. “When they get a raise, the economy will grow in very real terms. My commitment has never wavered, my signing pen is at the ready. All I need is a bill on my desk to sign.”

Murphy thanked both Senate President Stephen Sweeney (D-West Deptford) and Assembly Speaker Craig Coughlin (D-Woodbridge) for their support on the issue, and gave a shoutout to Sweeney for passing a bill that Gov. Chris Christie ultimately vetoed.

Instead, the one-quarter of New Jerseyans, or more than 1 million families, affected by the minimum wage will only see an increase of $2 per day in an eight-hour workday with next year’s minimum wage increase, Murphy said.

In a statement Monday, Sweeney supported the call from the governor.

“I stand ready to meet with the governor and the Assembly speaker to negotiate the details of a $15 minimum wage phase-in and to quickly pass the agreed-upon legislation to raise the wage,” he said.

“Too many of our fellow citizens work more than 40 hours a week and juggle multiple jobs, yet still do not make enough money to put food on the table, pay their utility bills, buy shoes and clothing for their children, and keep a roof over their family’s heads. That’s not acceptable.

“This is no time for staged rallies and dueling press conferences. Let’s sit down, do the hard work and agree on a bill.”

New Jersey Business & Industry Association CEO and President Michele Siekerka reiterated concerns of the impact a $15 minimum wage would have on small businesses.

“Any responsible pathway to raising the minimum wage should take into consideration the impact on our small business owners, which drive our economy and support our communities,” she said. “Many of our members have already told us any significant increase in the minimum wage will result in a reduction of staff, hours and/or benefits, or an increase in prices or automation.”

During his news conference, Murphy introduced a number of speakers, including a small business owner who has already implemented a $15 minimum wage.

Siekerka said a phased-in approach would be better than an immediate jump.

“A gradual, phased-in increase of a $15 minimum wage will provide our job creators predictability and the ability to keep up with the continuing rising costs of running their business. It’s also important to remember that raising the rate at the entry level, regardless of an employee’s skill level, means resetting the rate for other workers across the board. Concerns about wage compression are real and can create inequitable pay differentials between low-skilled workers and trained or experienced ones,” she said.

Coughlin tweeted his support of the increased wage, and released a statement after the governor’s news conference.

“In September, I stood publicly with the governor at Elijah’s Promise and acknowledged my full support of a $15 minimum wage. I strongly believe that it is my duty, and the duty of my colleagues in the Legislature, to take meaningful action to provide all New Jerseyans with a fair living wage,” he said. “The Assembly is the final stages of crafting legislation. This legislation addresses the issue of helping New Jersey’s working poor be better able to afford living in the state while taking into consideration the concerns of the state’s valued small business community.

“It is incumbent upon the Legislature to produce fair and responsible legislation for the people of New Jersey and that is what we will do. It is important that the members of the Assembly have the opportunity to consider and debate the bill. I am confident that we will consider the legislation either later this year or in January. ”

It is my duty, and the duty of my colleagues in the Legislature, to take meaningful action to help the hundreds of thousands of New Jerseyans who are struggling because they work several jobs and still cannot earn enough to make ends meet. https://t.co/jTNul3YyOv