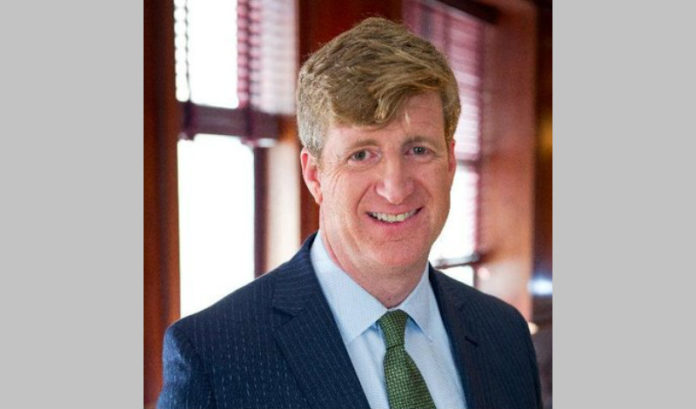 Former Rhode Island congressman and current Brigantine resident Patrick Kennedy has staunchly opposed marijuana legalization, correlating its use to Big Tobacco and alcohol and the dangers of addiction that come with both.

Kennedy has been vocal about the impact of addiction on his family — as well as himself — while he was in office.

Kennedy was elected to the House of Representatives in 1994 and served eight terms, leaving in January 2011.

In 2008, he pushed for the Mental Health Parity and Addiction Equity Act, which requires health insurers to achieve coverage parity between mental health/substance use disorders and medical/surgical benefits, especially in regard to financial requirements and treatment limitations.

Kennedy was in Trenton on Monday, at the joint Senate and Assembly committee hearing on legalization of personal use, expansion of medical marijuana and addressing expungement of marijuana records.

Prior to the start of the hearing, he spoke with ROI-NJ on his position on the bills.

On legalization of personal use:

“I am expressing my concern as a father of five and a resident of this state where all of my children are going to grow up. I just feel an obligation to do everything I can to ensure they grow up in an environment where they are not totally barraged with enticements to use drugs and alcohol. I really have a problem with the way alcohol has been advertised on television, in a way that we would have never allowed on network TV.

“(We) really reduced the regulations that allow … the liquor industry to promote their products in a really egregious way. I just worry that the same will be true of the marijuana industry, where they are going to sell their products in the form of edibles, which are gummy bears, brownies and ice cream. It’s the same ploy as we saw by the Big Tobacco industry, and I just don’t want to have that come to my new home state of New Jersey.”

On medical use expansion:

“I’m for medical research. I’m not for having this open-ended definition of medical marijuana. We really only can call something medicine if it’s been verified to be helpful and its side effects are not so egregious that it defeats the whole benefit. We do need to test that. We do have a new product on the market which addresses the seizure disorders that really takes the CBD component and utilizes it.

“I don’t know why they have to go through the FDA and no one else does. So, I think it really begs the question: Why do people wrap this thing up in the definition of medical when it really is a Trojan horse for them. It really jeopardizes the overall public health.”

On Rep. Joe Kennedy III (D-Mass.), his cousin, being in favor of legalization:

“Joe has expressed his concern about the commercialization as I have. I think he feels as though a federal regulation and a federal regulatory infrastructure would be more useful in ensuring this industry is held accountable, as opposed to a patchwork quilt of state regulatory bodies. He has a different way of going about it.

“I don’t think anyone can think that he is for marijuana. If anything, he is, I think, trying to do this in an expeditious way where if marijuana had to go through FDA regulation — who knows how they could survive that. Maybe his approach will be an approach that is ultimately effective, God forbid this thing continues to go the route that its going. For my part, I’m going to do what I can to slow the freight train down.”