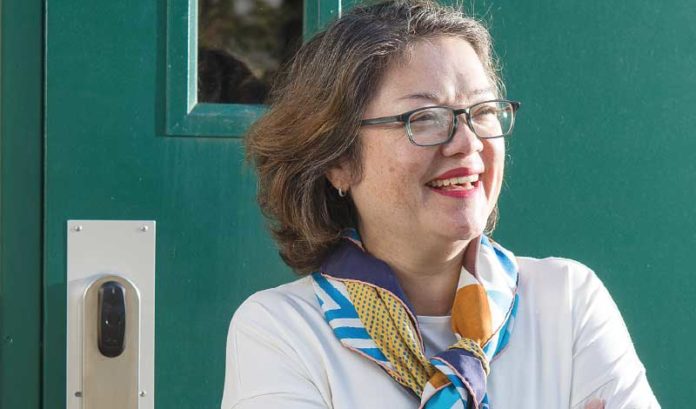 In fact, it is a path she said she hopes more women follow.

“I think strategically planning out a career is something more women in business need not worry much about when they are out building a good network and delivering great track records for when they come across that right person,” Leaney said.

Leaney certainly did things her own way.

From studying modern and medieval history at the University of London to developing a marketing career across industries, Leaney said she then learned to service mortise locks and install electronic access control systems as the majority owner of a multimillion-dollar door safety and security company.

“My passions were more closely aligned than maybe is obvious,” Leaney, CEO of Hogan Security Group in Pennington, said.

It’s why she chose to study history — even though she always knew she wanted to work in advertising.

The two, she said, are intertwined.

“History and advertising are both narrative-driven disciplines all about understanding data, human behavior and cause and effect,” she said. “But I wanted to understand what it was that would make someone buy a certain item over another.”

How did that lead to a career in security? Only Leaney can explain the circuitous route.

Leaney began her career in London in 1990 as a corporate account manager with the advertising firm Abbott Mead Vickers. By 1996, she was in Los Angeles, working for Ogilvy & Mather. In 1999, she became the first account planning and research partner at Ogilvy & Mather in Los Angeles.

A year into her new role, however, Leaney said she met an executive at Nickelodeon who offered her a role as head of marketing for a new television and online joint venture between Viacom and the creators of “Sesame Street.”

“It was a small team with big ambitions, endless opportunities to innovate, tough financial goals and would be growing in the unchartered territory of integrated educational media with no guarantee of success,” Leaney said.

Still, she jumped, this time to New York City to become the first senior vice president of brand communications for Nickelodeon’s digital channels.

Leaney said she started to become known for being “first.”

In 2006, she became the first creative director of Nickelodeon’s preschool and parents division; in 2008, the first chief marketing officer of Newsweek; and in 2010, the first and only female executive vice president of marketing for the Harlem Globetrotters.

“I learned a ton of corporate best practices, disciplines and tactics that also would work for smaller companies, including startups and women-owned businesses, and I wanted to begin aligning my skills in business with what they needed,” Leaney said.

So, in 2015, Leaney founded her own marketing consultancy called The Bespoke CMO.

“My pitch was, you can hire a seasoned corporate CMO with a track record to work when and as you need on your small business as a contractor,” she said. “That was really transitional for me — and gave me a flavor for working for myself.”

It also made her husband, Dan Hogan, keen on involving her in the family business.

Leaney met Hogan in 2002 while working for Viacom in Manhattan.

“He had founded Hogan Security Group — a ‘man with a van’-type business — and was busy being an entrepreneur in New Jersey,” Leaney said. “But I would be talking about the work I was doing in New York at a corporate level and sharing with him that there were some practices which actually work well for small business, too.”

Leaney said she was unsure at first about leaving behind the successful career she had built.

“However, I was taking on more revenue responsibility, more business development, and I just thought, why do I commute nearly five hours from New Jersey to New York every day working for someone else when I could be growing the family business this way in Mercer County?” she said.

Leaney purchased the majority of Hogan Security Group in 2017, she said, to create a sustainable talent pipeline and modernize the brand as the company’s new CEO.

“The things most likely to go wrong in a building, aside from the roof, are the doors,” Leaney said. “It is a component that involves a lot of different disciplines, such as a carpenter, an electrician, a locksmith and more, with everyone doing their part.

“But no one then makes sure that all of it is functioning together properly.”

Hogan Security Group has designed, supplied, installed and serviced life safety and security products on more than 30,000 doors in schools, hospitals, corporate and industrial buildings, multifamily residences and more since 1982.

“We talk about ourselves as door integrators,” Leaney said. “Our clients call us, we agglomerate the skills of various other trades, and bring them together at a point pivotal for security and life safety.”

Times are changing, though, and the company must change with it.

“You’re more likely now to use a swipe card to get into a building or a phone to enable entry,” Leaney said. “The nature of work and living has become more mobile and has changed the needs of security in ways that add complexity.”

That means investing more resources into lockdown protocols and mobile accessibility — and hiring.

“But, since we cannot brag about the work we do in security, that makes it harder to find skilled technicians to come work with us,” she added. “We therefore developed our own program with Mercer County Technical Schools to train high school seniors.

“But it is very difficult for a company of 15 to help narrow the skills gap of an entire state.”

Not to mention gender diversity within the field.

Including Leaney, just three women currently work at Hogan Security Group — and all eight of the company’s technicians are male.

“So, I went to the schools and asked to speak to those outside of the electrical program,” Leaney said. “Just to pitch the idea to other people who may not even have considered us.”

“Nearly 60 percent of our apprenticeship applications came from women that month,” she said. “It reminded me that I can’t sit here at my desk and wait for a woman to call and ask what career opportunities we have.

“I need to go out there and hustle.”

It is an exciting time for Hogan Security Group, Leaney said.

“I anticipate at least five new blue-chip clients by the end of next year,” she said — in part due to the opportunity to bid from general contractors that she had not yet seen before becoming certified as a woman- and minority-owned business last November, she added.

“It is opening a ton of doors for us with companies who believe a diverse supply chain for whatever their procurement needs are benefits the business and its growth,” Leaney said.

Leaney said she continues to be fulfilled in her career as she does or learns something new every day.

“The amount that you can and need to learn quickly working in a small business at whatever stage in your career you are in is awesome,” she said. “There is no reason not to make the leap or transition because you really are never alone.”

Panel: COVID-19 has changed everything about business deals, but not necessarily...