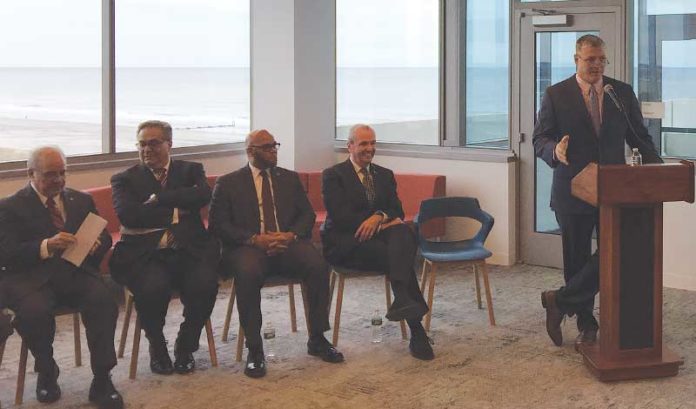 Ever the salesman and ever the cheerleader, Harvey Kesselman just couldn’t resist.

When the Stockton University president took the microphone at the ribbon-cutting ceremonies for South Jersey Gas — the co-tenant with Stockton at the Atlantic City Gateway Project — Kesselman made his pitch for a local pizza joint.

“When you leave here today,” he said. “Carluccio’s is open across the street.”

With one crack, Kesselman summed up last Wednesday’s activities.

It wasn’t about the new South Jersey Gas headquarters. And it wasn’t about the Stockton University dorm or the Atlantic Care Urgent Center and the other shops and parking lots that make up the Gateway Project.

It was about a group of Atlantic City and South Jersey leaders combining with economic development experts and state officials working together to give Atlantic City another glimmer of hope — and more evidence that the casino city is, in fact, diversifying.

“The great thing,” Murphy said. “(This is) not the first ribbon-cutting in Atlantic City this year. That’s a little point, but a very important point.

“This is just the latest in string of celebrations that all point to one irrefutable fact: Atlantic City is back.”

“This is our home,” he told the crowd. “Our origins are here.”

It hadn’t been home, however, for decades.

The South Jersey Gas leadership, starting with now-retired CEO Ed Graham, made the commitment to return to Atlantic City at a time when most of the corporate traffic was going in the other direction.

“Four years ago, the city was in a little bit of trouble,” Renna said. “It seemed like everyone was moving out, casinos were closing and there was not a lot of optimism and hope. We saw an opportunity to come back home.

Just over 200 eventually will work out of the facility. Nearly all are here now; the rest should be by the end of the year, Renna said.

Renna understands the impact of these employees to the area.

“This was a casino-centric town,” he said. “We’re now bringing back one of the largest employers in southern Jersey.

“There’s a new sense of excitement in Atlantic City and we’re really glad to be a part of it.”

“This isn’t just another location for South Jersey Gas and Stockton’s new Atlantic City campus, this will be an anchor for an entire neighborhood in this city.”

Paladino has long held a vision for what this project could be for Atlantic City.

“This is certainly one of the most exciting and impactful public-private partnerships that we’ve ever engaged in,” he said. “(There is) 675,000 square feet in one intersection in Atlantic City, which was the important part.

“This really did create critical mass in the Chelsea neighborhood. Our marching orders from Chairman Hanson, right from the beginning, was to start a development program that not only added vitality to the city but proved there was a development option where we could use public-private partnerships in Atlantic City.”

Paladino, the architect of so much of the redevelopment of New Brunswick, knows firsthand that public-private partnerships cannot work unless a lot of entities truly are willing to partner.

Most of all, he credited South Jersey Gas.

“First to step up was South Jersey Gas, first Ed Graham and then Mike Renna,” he said. “(They) not only committed to return South Jersey Gas employees and headquarters back to the city where it started, but at every turn, they were pragmatic and willing partners.”

The result, Paladino said, is evident.

Just walk outside of the building.

“We have an energized neighborhood,” he said. “It doesn’t take much to see it, just come here any day and go across and eat some pizza, you’ll see the tempo of the streets here have really changed.”

Jingoli has been involved in Atlantic City for as long as anyone.

Most people around the state know him as one of the co-owners of the Hard Rock Hotel & Casino Atlantic City.

Folks in the city know him as the hands-on job creator whose train-to-work programs have helped hundreds of area residents not only get jobs, but get careers — including many of the workers who helped build the AC Gateway Project.

Jingoli saw the day as another milestone — and another opportunity.

“What was empty lots a little over a year ago is a beautiful corporate headquarters of one of our largest employers in South Jersey who started in Atlantic City and came back,” he said. “And our university came back. And not just with office space, but with educational space and dorm rooms and students, hundreds of them.

“We’re really on the cusp on a new Renaissance for Atlantic City.”

Jingoli, however, knows it is far from a sure bet.

“The Boardwalk is still there, the beach is still beautiful and now we have more people to see it and take part in it, but it’s still very fragile,” he said. “I think we all need to be mindful that the people that live here need to feel that they are a part of here — and that’s in jobs that can become careers and in training and in education. Just the dialogue that we’re having based around that is huge.”

The dialogue is ongoing.

While Kesselman is publicly pushing to help local businesses, Jingoli and Renna are privately meeting about jobs.

“Mike Renna called me and said he needs five bilingual call center employees a year for five years,” Jingoli said. “So, we went over to the PAL and they have English-as-a-second-language classes and found people.

“We didn’t need a program, we just need connectivity of like-minded people. Now, we’ll develop a syllabus and, hopefully, a year from now, five people from Atlantic City will be call-center employees for a utility.

NJIT to launch Profeta centers for real estate and entrepreneurship —...

Camden business leaders understand issues — and are eager to solve...