Home Lifestyle Did you remember to move the Elf (on the Shelf)? A holiday...
Facebook
Twitter
Linkedin 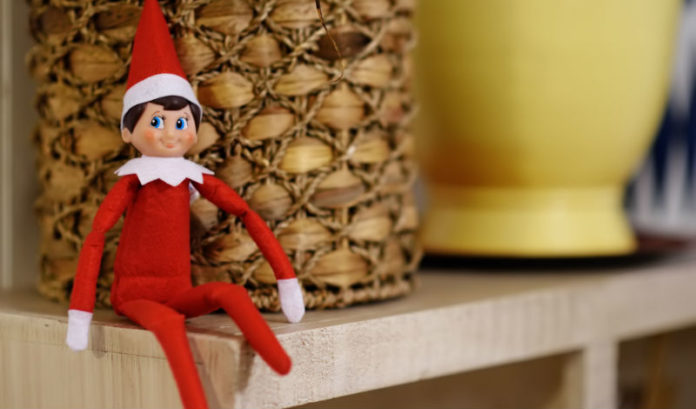 I remember the first time I got hit with that cold sweat that only comes when you realize your desperate attempts to keep Santa Claus alive for the youngest of your kids appears to be unraveling.

We were pulling into our neighborhood following an 11-hour, over-the-river-and-through-the-woods trip to Grandma’s for Thanksgiving when our then-5-year-old daughter eagerly announced: “I wonder where Ian will be?”

The glance of terror my wife and I exchanged was one a growing number of parents know this time of year: “We forgot about the Elf on the Shelf!”

Some call it a charming, old-school holiday tradition in an era when computers and electronics rule the holidays. Others call it a horrific breach of privacy where we are indoctrinating our children into an NSA-based, “1984” society (a stunning reach, but more on that later).

Others simply call it a marketing masterpiece, while kicking themselves for not thinking of it first.

But one thing is clear: The Elf on the Shelf, 14 years after a mother-daughters team created it over a cup of tea, is now a worldwide phenomenon.

More than 13 million books (which come with the Elf) have been sold. There is a children’s special and an animated movie. There are companion toys known as Elf Pets. (For a nice recap of the franchise, click here.)

How big is the franchise? There now are imitators: The “Mensch on the Bench” and the “Reindeer in Here” now are being marketed.

But for millions of households like mine, it’s the thing that wakes you up in the middle of the night from Thanksgiving to Christmas: Did we move the Elf?

For those without young kids, a quick primer.

The Elf on the Shelf is a roughly foot-long bendable stuffed toy that is placed in your house to observe the children during the day, on behalf of Santa himself.

Kids get to name it (for some reason, ours is “Ian”) and can talk to it all day. Mine leave it notes detailing their behavior and lists of toy ideas, too.

Each night, the Elf supposedly brings a naughty-or-nice-type report to the North Pole and returns to your home.

In a different spot.

It’s one of the few rules you learn in the introductory book that comes with the product: The Elf cannot be touched by humans (and, if it accidentally is, there is some sort of cinnamon antidote that makes it OK), and it must be moved to a different spot each night.

It is supposed to make its first appearance on the day after Thanksgiving, though some say it’s OK to start on Dec. 1.

That’s approximately four weeks of remembering to move the Elf.

Thirty nights of getting that elbow at 4 a.m. — or just minutes before a little one races downstairs to see where the Elf is now.

In my house, that means moving from a clock to a mantel, from the top of drapes to the top of a bookcase. In a hanging light to in the Christmas tree.

We usually run out of resting spots by Dec. 1. So do many others. It’s a reason many an Elf makes an extended stay at the North Pole in some houses.

The tradition is for the kids — but, of course, the adults can go overboard.

If you go online, you’ll see some of the creative ideas others have come up with. My favorite: The Elf posed while making a snow angel next to a knocked-over jar of flour.

It’s this fun that spawned the holiday TV special (it’s on six times between now and Christmas on Cartoon Network, TBS and TNT), earned a coveted spot in the Macy’s Thanksgiving Day parade and helped Carol Aebersold and her twin daughters, Chanda and Christa, win the biggest awards in the toy industry.

It’s not all fun and games. The Elf nearly caused a small fire in Franklin Township earlier this month (quick hint: Don’t put the cloth elf against a heat source).

And there’s been plenty of backlash over the years, too.

Some have said it’s a money-making idea dressed up as a tradition. (The holidays have become commercialized … I’m shocked.)

Critics have said it perpetuates “The Santa Lie.” (That’s the problem with childhood these days? Believing in Santa?)

Others say it encourages spying: If it’s OK for an elf to spy on kids, it must be OK for the government to spy on its citizens. (Really?)

And then there’s the crowd that says it’s just a parental crutch during the holidays that parents use instead of actually parenting. (The guess here: The person who came up with that theory doesn’t have kids.)

I say it’s just the biggest pain in the butt of the holiday season: “Did you move the Elf?”

And one I know I’m going to miss.

My older kids now pick out their own presents from Santa. My youngest (now 12) still tells Ian. That’s priceless.

And the time when one of my kids was chasing another around the house, only to stop and plead his case to a watchful Elf about why this behavior was somehow acceptable … well, that’s a story that will be told for years.

That’s what family time at the holidays is all about: creating memories.

I don’t remember anything else about that Christmas a few years ago — couldn’t tell you about any of the dozens of presents that were purchased.

But I do remember pulling into the driveway and telling the kids I may have forgotten to leave the heat on, so I needed to run into the house to check.

And how seconds after a mad dash upstairs produced an Elf that was placed on a shelf — and I gave the all-clear to the kids, assuring them the heat was on — my littlest one eagerly searched the house.

And, for another year, she believed.