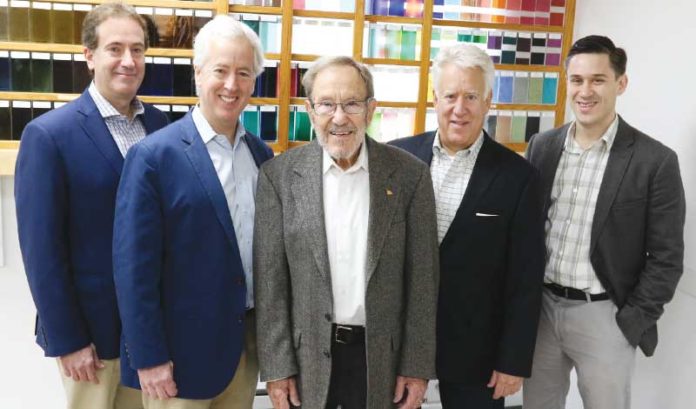 Ben Jayson said he knew he would join the family business one day.

“But I wanted to establish myself and develop a basis of understanding and knowledge that no one else in the family business had, to try to bring some strength into the company rather than learn everything in-house,” he said.

So, after beginning his career with General Electric, Jayson returned to Bendheim, his family’s specialty glass business since 1927, in 2015.

He’s in the process of being groomed to be the fourth-generation leader, serving as principal. And he’s starting to put his imprint on the organization.

And it services some of the biggest companies and organizations in the world: from the White House to Walt Disney World, to the South Street Seaport in New York to the New Doha International Airport in Qatar, to New Jersey businesses such as Bristol-Myers Squibb, Merck and Unilever.

This year, it’s moving its headquarters to a purchased building in Wayne from a rented location in Passaic to more than double its space and efficiency.

Don’t be confused, though.

While Jayson is taking a greater role, it is still a family business — meaning all decisions get a lot of input. Jayson thinks this is one of the reasons the company is closing in on 100 years.

“Everybody is closely involved in every decision, and because you must listen to everybody’s ideas, you grow more considerate and learn to respect your differences and various perspectives,” he said. “And, when we are outside of the business, we still see each other regularly.

Sem and Margaret Bendheim founded the company in New York City as an importer and distributor of specialty glass products, including artwork used primarily in churches and by hobbyists.

Ben Jayson gives a lot of credit to his dad, Robert, for helping the company prosper.

“(He) realized in the 1970s how an existing glass product looked like old window glass, and thought, people must have all sorts of issues when windows break in an old building,” Jayson said. “But the only options were to try to find a similar window from an old barn or home, or to put in a modern machine-made piece of glass without the imperfections of mouth-blown glass, which gave it character. He realized there was a large market for this, and developed restoration glass at Bendheim.”

The best way to go to market, Jayson said, was through the architects building and restoring traditional-style structures.

“They’d say, ‘This is a great product — do you have anything else?’” Jayson said. “And we’d say, ‘We have thousands of glass types available,’ but no one was able to use them, because they weren’t safety glass.”

There are two types of safety glass, Jayson said: Tempered glass, such as car side-windows, which breaks into small pieces and is four times as strong as non-tempered glass; and laminated glass, which, like a car windshield, stays in one piece once broken.

“In order for architects to use our glass, it had to be in one of those forms,” Jayson said. “So, we started working with companies that would take our specialty glass and temper or laminate it. But, as we started to grow, we decided to vertically integrate the glass fabrication in-house.”

“We consult with architects to design the right products for their applications,” Jayson said. “We also maintain relationships with general contractors who are typically awarded such projects, and we develop strong relationships with the glaziers who are purchasing from us and installing our product.

“Not many companies target all three markets the way we do.”

Studies show fewer than 3 percent of family businesses make it into the fourth generation.

“It is very challenging and concerning when one makes the decision to go into a family business, because you always hear horror stories of how it can tear a family apart. But, for us, it actually keeps our family closer together,” Jayson said. “For every major decision, my dad, my uncles and I all come together on the same page.”

Including the company’s current relocation to Wayne, Jayson said.

“We had been looking for the right building for more than three years, but it was nearly impossible to find a building with good manufacturing space near New York City,” he said. “We completely outgrew the space we currently are in.”

“With offices, our future space will total 138,000 square feet and will be much more efficient,” Jayson said.

The move, expected to be completed by the end of this year, means the business will continue adding to its nearly 110 employees.

“We’ve already added 20 positions, and, with the increased space and growing business, we certainly will need to hire more,” Jayson said.

Though Jayson said there had been earlier discussions of possibly relocating to New York, it seems this move solidifies an increase in New Jersey’s workforce, instead.

“Yes, qualified labor is difficult to find; there is a lot of competition in the area; and, of course, the property taxes, utility costs and expenses are high compared to someone operating elsewhere,” Jayson said. “But New Jersey is great because it is centrally located, and our proximity to such a big market in New York helps.”

As for Jayson, he said he is staying put, too.

“Before you make the decision to join a family business, think it through, because once you make the choice, you’re all in,” he said. “It will not be easy to interview and leave to go elsewhere — you have to make sure it is your long-term plan.”

Ben Jayson, principal at Bendheim, said he has worked at the family business his entire life.

“Every summer, I would come here to cut samples and move glass around,” he said. “Even when I was 3 years old, I would run letters back and forth between the offices.”

After graduating from Blair Academy in 2006, Jayson studied finance, marketing, accounting and German at Northeastern University, and international business administration and insurance during a semester abroad at the ESB Business School at Reutlingen University in Germany.

Upon graduation, he worked for one year as an office assistant at Bendheim before entering the financial management program with General Electric and working in financial reporting and analysis with the company for four years.

Finally, Jayson joined Bendheim full-time in 2015, involving himself in everything from marketing to manufacturing to sales.

“I also brought in a financial analyst and am spearheading that initiative,” he said.

Jayson said he certainly recommends making it on one’s own first before joining a family business.

“Get some experience, understand what it is like to work for different people, with both good and bad managers, and try to become self-aware to be able to recognize your own strengths and weaknesses, because when you are in a family business, nobody is going to tell you that,” he said. “And, if they do, it won’t feel as sincere — it will simply feel like your Dad telling you to do something.”