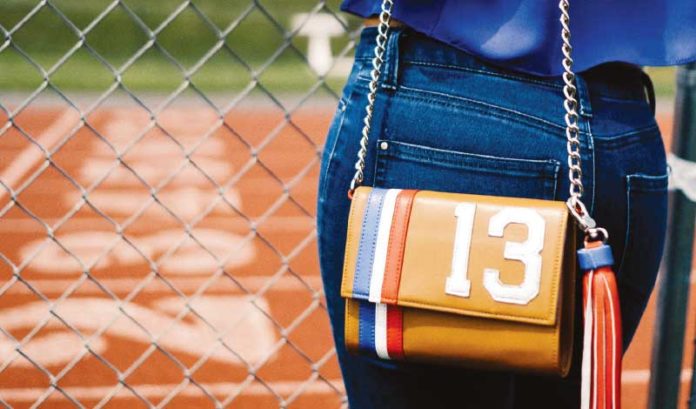 Lauren Farrell did not allow her childhood injury to keep her from participating in sports.

Instead, she found a way to combine her passions for fashion and athletics via entrepreneurship, she said, manufacturing stylish fashion for the female sports fan.

“There should be no reason that game day is any different from any other day of the week for the fashion lover,” Farrell, 27, said. “You’re still telling the world who you are and what you’re about by what you wear.”

And, of course, which teams you root for.

Farrell, CEO of Lauren Farrell NY in Westfield, custom designs and manufactures exclusive handbags and attire using recognizable colors and a “team mentality,” she said, for what she believes to be a wide-open market.

According to Nielsen Sports, women make up more than 40 percent of all fans across all major sports in the U.S. — and have a collective purchasing power of more than $5 trillion.

But Farrell is no stranger to meeting challenges where they lie.

The injuries Farrell sustained after she was hit by a car in her neighbor’s driveway as a child resulted in five surgeries before eighth grade and decreased mobility and athletic opportunities for the otherwise competitive middle-schooler.

Missing a sense of team camaraderie, Farrell managed the men’s lacrosse team while studying design and entrepreneurship at Lehigh University and pursuing a patent for a wrist wallet designed to look like a cuff bracelet.

“I often found myself growing tired of wearing the same lacrosse T-shirt and noticed that the moms and girlfriends of the players also would try to wear team colors without necessarily wearing a jersey or a T-shirt, too,” Farrell said.

Upon graduating in 2013, Farrell managed to get a job supporting the U.S. operations and president of Gucci for one year.

“The caveat was that it was a temp-to-perm position, and the initial trajectory was six to nine months,” she said.

In the meantime, Farrell said, she continued pursuing her patent.

“But, in terms of free time, the fashion district shut down on weekends, and when I left work at night during the week, everything already was closed,” she said. “It really is an industry where you need to be there during hours of operation.”

Being that a permanent position with Gucci was not coming to fruition on the expected timeline, Farrell said she made the difficult choice to leave and pursue entrepreneurship full-time.

“I said: ‘You know what? I’m young and I have nothing to lose,’” she said. “I got the chance to support high-up people at a luxury fashion company and had been producing a caliber of work that had been acceptable for them.

“That gave me the confidence to go ahead and chart my own path moving forward.”

“When I started asking people where they could see themselves using it, what kept coming up was game day at sports stadiums,” she said. “Especially because the National Football League and a ton of college stadiums have very strict bag policies on the type and size of bags women are able to take in.”

Farrell said she then began to notice the significant white space in the market of handbags for the female sports fan and fashionista, despite the fact that nearly half of all women across 24 major countries in the Americas, Europe and Asia declared themselves sports fans.

Handbags, it turned out, were a perfect entry point into a much larger market.

“I’ve sold to multiple wives and girlfriends of players in the NFL, including Lauren Tannehill, wife of Ryan Tannehill, quarterback for the Miami Dolphins, as well as Kacie McDonnell, Boston sports reporter, and Sara Blakely, founder of Spanx,” Farrell said. “I’ve sourced their teams’ colors and have even put their husband’s or boyfriend’s jersey number on their bags, too.”

Then she branched out into apparel.

Today, Lauren Farrell NY sells crop tops, blouses, tanks and more, with the average ticket price of $130, and stadium-approved handbags, cross-body bags, and clutches ranging from $95 to $475 — all manufactured in the U.S.

“You have the ability and flexibility to do things quickly when you manufacture in the U.S.,” Farrell said.

A big piece of the brand, Farrell said, is market exclusivity, and U.S. manufacturers make it easier to cap production on each style produced so that clients do not walk into stadiums and see every other woman with their shirt or bag.

“The whole idea is to make our pieces fit your own personal style,” she said.

Every dollar earned thus far has been reinvested into the company, Farrell said, due to having experienced early production flaws outside of the U.S.

“In the classic story of an entrepreneur, there are always things that happen along the way that you do not account for,” Farrell said. “For example, Donna Karan also came after me for my logo being too closer to theirs, and I had to pay those legal fees, and my first freelance web developer lied about his portfolio of work and what he was capable of doing.

Furthermore, even though Farrell currently is speaking with Fanatics to sell her merchandise in stores later this fall, licensing can be expensive, too.

“No one owns colors unless I were to use the exact pantone combination,” she said. “However, I can’t take my bag and, even with something as simple as Instagram, have a hashtag that says, #GoPatriots, for example, because creating that association without a license can get you into trouble.

“But collegiate may be a nice way to go, due to its simpler application process, yearly fees and royalty payments — it may open a lot of doors.”

Farrell also partnered with Deckers Dogs, an initiative by the Eric and Jessie Decker Foundation to help fund the rescue, care and training of support dogs for military veterans, in September, with $15 from each Lauren Farrell NY product sold going toward a cause that directly supports Freedom Service Dogs of America.

“It can cost more than $25,000 to train a service dog,” she said. “But this organization is really cool, because they are not only rescuing dogs from shelters but also training them with prisoners and getting them to veterans who need emotional or physical support at the same time.”

Farrell said that, as she continues to seek investors, she would like to hit the road and more actively pitch to boutiques in cities and college towns, with the goal of being in more than 15 retail locations within a year.

The business, after all, is not limited the way sports often are.

“There are sports for every season and always something to be done,” she said.

Lessons learned, and given

Lauren Farrell, CEO and designer of Lauren Farrell NY in Westfield, said she always had loved the idea of working for herself after attending a weeklong immersion program with fellow Lehigh University students in San Francisco.

“The program broke down the world of entrepreneurship, from venture capital to legal,” Farrell said. “I did not know what it was I wanted to do yet, but I knew I wanted to be like the people I met through that program.

“They had their own passions and this incredible, tangible energy in trying to make their dreams happen, and that stuck with me.”

Farrell said now that she, too, has made the leap, she has spoken multiple times with business students back at Lehigh University about entrepreneurship.

“The dream one day would be to be able to donate a fashion program to Lehigh,” she said.