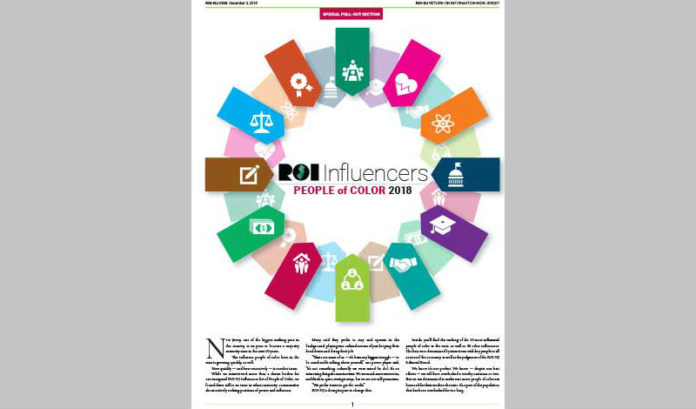 New Jersey, one of the biggest melting pots in the country, is on pace to become a majority minority state in the next 10 years.

The influence people of color have in the state is growing quickly, as well.

How quickly — and how extensively — is another issue.

While we interviewed more than a dozen leaders for our inaugural ROI-NJ Influencers list of People of Color, we found there still is an issue in ethnic minority communities about actively seeking positions of power and influence.

Many said they prefer to stay and operate in the background, playing into cultural norms of just keeping their head down and doing their job.

“There are some of us — it’s been my biggest struggle — to be comfortable talking about yourself,” one power player said.

“It’s not something, culturally we were raised (to do). It’s an interesting thing about minorities: We are much more extroverts, and think in quiet, strategic ways, but we are not self-promoters.

“We prefer teams to get the credit.”

(READ: ANJALEE KHEMLANI ON IMPORTANCE OF ETHNIC DIVERSITY IN BUSINESS.)

ROI-NJ is doing its part to change that.

Here, you’ll find the ranking of the 10 most influential people of color in the state, as well as 50 other influencers.

The lists were determined by interviews with key people in all sectors of the economy, as well as the judgment of the ROI-NJ Editorial Board.

We know it’s not perfect. We know — despite our best efforts — we will have overlooked a worthy omission or two.

But we are determined to make sure more people of color are honored for their work in the state. It’s a part of the population that has been overlooked for too long.