Optimism among small business owners has made big leaps in regard to strong revenues and cash flow in the latest quarterly Wells Fargo/Gallup Small Business Index survey. 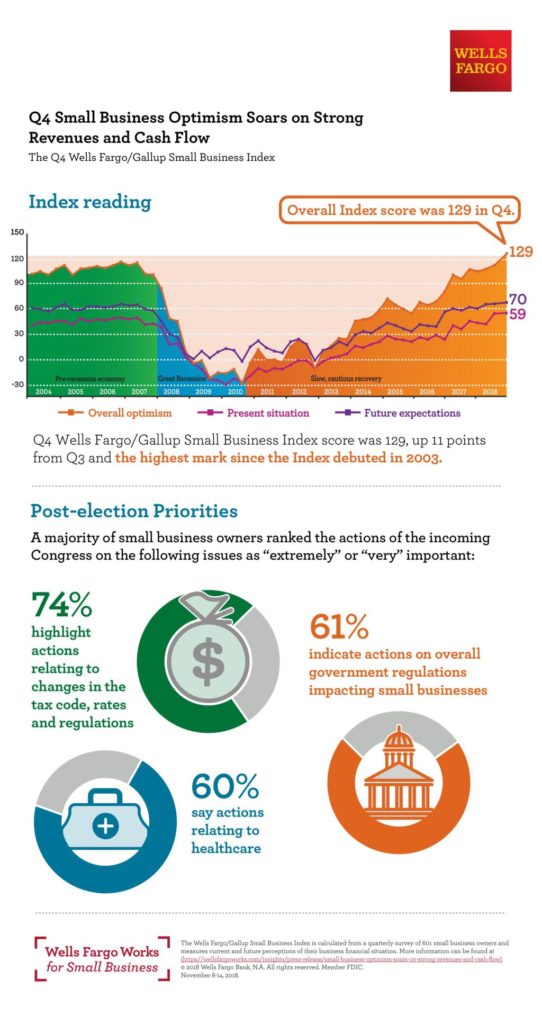 More than half (55 percent) of business owners said their company’s revenue increased, up from the same period last year at 46 percent, with 62 percent estimating revenue increases in the next year.

“As we head into the end of 2018, small businesses are continuing to indicate that they are thriving and hopeful for the future,” Andy Rowe, Wells Fargo head of customer segments, said. “With owner optimism hitting its highest level in the 15 years Wells Fargo has been conducting this survey, we are excited to see what this will mean for their continued capital investment and growth.”

The survey also focused on the top priorities business owners see for the new Congress.

“With the increases we’ve seen in business owners’ revenues and the high degree of confidence business owners have in their cash flow, it’s not surprising that taxes remain a key issue for them,” Mark Vitner, Wells Fargo managing director and senior economist, said. “While the number of business owners that don’t expect changes to their operating environment remains high, most see the current environment as very good and many business owners are looking to expand their business in 2019.”

For the third quarter in a row, respondents said hiring and retaining staff was their top challenge (18 percent). Other challenges include attracting new business (10 percent), taxes (9 percent) and government regulations (9 percent).

The survey was conducted from Nov. 8-14, immediately following the midterm elections, with a margin of error of +/- 4 percentage points.