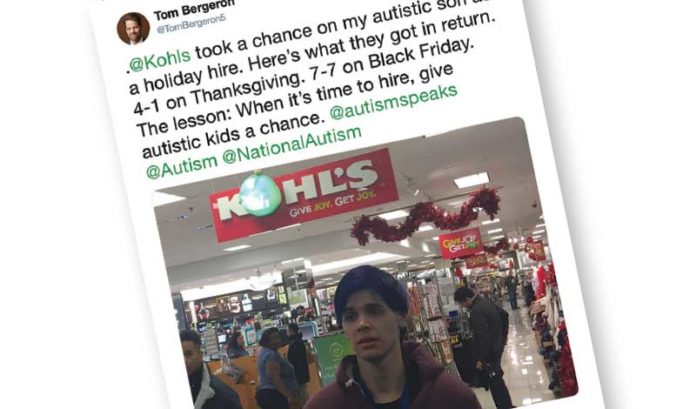 The first words after the job interview often were the hardest.

“They said they were reviewing all of the candidates and they would get back to me in a week,” my 21-year-old son would say confidently as he climbed back in the car.

He was proud that he handled the interview all on his own and that I waited in the car.

I offered the usual words of encouragement, while also knowing the truth: They weren’t going to call back.

This was the type of place that hires just about anyone on the spot.

Anyone who isn’t autistic, that is.

In a time when companies are begging for employees — willingly paying well above minimum wage for starter jobs and then bending over backward to do anything to keep them — only one segment of the population still is woefully underemployed.

It’s not necessarily the fault of employers (don’t misinterpret the point of this column). If you are not familiar with the habits or idiosyncrasies of someone on the spectrum (that’s another way to say they are quirky), you may not understand what they have to offer. And you may not be comfortable interviewing them.

Especially when you see they are not comfortable being interviewed.

That’s where people such as Brooks Sanders, manager of employment services at Eden Autism Services in Princeton, step in.

Sanders’ job is to be a liaison between those on the spectrum and those looking for employees.

He places a couple dozen ASD young adults a year, he estimates.

The process, Sanders said, is not necessarily any different than someone who is neurotypical (it’s a term for those who aren’t on the spectrum). It starts with finding someone’s skills and passions.

“If they love the guitar or music, the goal is to find a job involving that. It’s the same as you and I. You love what you do; they should love what they do as well.”

Major companies around the country are starting to come around.

Microsoft, SAP and IBM all have started programs looking to hire workers on the spectrum.

In New Jersey and elsewhere, Project Search is working with many hospitals in the state to hire those with development disorders — often beyond the scope of ASD.

From some, it’s a part of an inclusionary hiring practice to diversify the staff. And, while that sentiment is nice, the reality is, it only goes so far.

Society needs it to get better.

For starters, there is a growing shortage of workers (or people willing to work; don’t get me started) and a growing number of members in the ASD community (one estimate says it is now 1.5 percent of the overall population).

The business community needs to find more placement services for this population.

Thankfully, efforts are picking up. And for the right reason: Adults on the spectrum have something to offer. In many ways, employers are finding their personalities can serve as an advantage in the workplace.

Routine, monotonous, repetitive tasks? A neurotypical person may only be interested in that job if they saw it as an entryway into the company — thus making it a job with endless turnover.

For someone on the spectrum, it might be fulfilling.

Here’s the catch — as anyone out there with an ASD child or young adult will tell you — no two ASD people are the same. They are all on the spectrum, but in different spots. And with different skills.

The challenge is finding where they fit in the workforce.

Sanders said he works with companies to make sure they understand the abilities of the potential hire.

“Let’s say they are looking for an administrative assistant,” he said. “We may have an individual who has all of the skills but is nonverbal, so we need to let them know they wouldn’t be able to answer the phone, but they could do everything else.”

Sanders works with the potential hires, too, making sure they are ready for the workplace and what will be involved.

And, in each situation, he stresses the positive.

“I like to call the ASD community individuals with exceptionalities,” he said “I don’t like the word disability, I think it just puts a negative spin on things. I like to say exceptional individuals, because our population are extremely exceptional people. They may lack one area, but they are very strong in another.”

Sanders said the support members around someone in the ASD community can play a role in the process, too.

“If you know they would be interested in a job stocking shelves in a grocery store, start by stocking the groceries or organizing things around the house,” he said. “Those skills and tasks can align with gainful employment in the future.

“What we try to do is use the vocational skills that are participants have and align them with jobs later.”

That’s at the heart of what Eden Autism Services does.

“We are preparing a person for employment,” Sanders said. “It’s one thing to put a job application out there, but it’s another thing to teach them how to secure a job and prepare them specifically for a job that’s needed.”

My son is more high-functioning than others on the spectrum.

He is on track to earn his associate degree next spring. It will take him three years — but, after the struggle that was high school, an endless line of special ed schools mixed with a strong component of school refusal — my wife and I are thrilled. Just keep making progress, we say.

My son has held a job before. He previously worked the drive-thru line at Wendy’s. And last summer, the fine people at the New Jersey Manufacturing Extension Program gave him a four-hour-a-week internship. (He loved it.)

But, for all that, making that final connection of a new job offer always is his toughest challenge.

My son was turned down by a half-dozen places before the Kohl’s in Morris Plains gave him a shot. A second shot.

He worked there as a holiday hire last year. And, even though he had been turned down on four occasions during the year, he was picked up again this winter.

He’s trying to prove himself.

He works the register. We feel the interaction he gets with customers is helping him grow as a person.

He said the neverending line of customers over the holiday weekend didn’t bother him. He enjoys working.

Here’s how much: I drove him to work on Black Friday after he had only a few hours of sleep. He got out of the car at 6:59 a.m. — and ran through the parking lot to get to the store.

He didn’t want to be late. Not even a minute late.

How many employees have that spirit?

Isn’t it time we give the ASD community a bigger shot in the workplace?

They may just surprise you. And fill a need your business can’t fill otherwise.