Paritosh Kumar said he came to the United States to pursue his dream of becoming an architect.

Nearly 35 years later, he has achieved that — and much more — as owner and principal of P.K. Architecture in Clark.

“A diamond may be small, but a lot of work has gone into it,” Kumar said.

After completing nearly $100 million in projects in New Jersey and being awarded Architect of the Year by the Edison Chamber of Commerce last month, the self-made entrepreneur said he is ready to expand his business to provide turnkey services all under one roof, ranging from architectural planning through construction.

P.K. Architecture, Kumar said, is therefore expected to grow both its revenues and hiring needs nearly four times over the next two years.

“Though we already do much more than what we sign on a contract,” Kumar said.

Born and educated in India, Kumar studied architecture until he immigrated to the U.S. in 1983 at the age of 24 to earn his bachelor’s and master’s degrees in architecture and urban design from the University of Oklahoma.

Kumar said he then began a 13-year career making millions of dollars for tri-state architectural firms. However, shortly after he became a U.S. citizen in 1999, his son was born.

“I already was doing so many of the (tasks) myself, and, at the same time, I needed some flexibility to be able to take care of my son,” Kumar said.

After working as a consultant for a short time, Kumar opened his own firm in 2001.

“I was able to work on my own as an architect from home for the first two years with my son,” he said.

So, he moved into an office space in Edison before relocating to his current storefront in Clark.

Kumar said he always sees the job as his client would.

“I always say, ‘If I were in my client’s position, how would I feel?’ I treat them as if I were in their shoes,” he said.

“Construction can be very challenging, so I am patient with my clients during the design process if they want to make any changes.”

Kumar said he then coordinates with contractors and townships to make sure everything goes smoothly.

“Building inspectors tell me all the time that I should see some of the drawings they receive,” he said. “They say, ‘We have to return them multiple times, which delays the construction process, because we don’t have enough information, but yours are so detailed and get it right the first time.’ ”

So far, he said, he has been successful, despite often multitasking on multiple medical, high-end residential, commercial and mixed-use projects, such as the Shanghvi Plaza in Irvington, which earned him a 2013 Good Neighbor Award from the New Jersey Business & Industry Association.

“That shopping plaza helped to bring the entire area up in value, as it acted as a focal point,” Kumar said.

Kumar also pointed to his work with Gulf American Line, an international logistics and transportation solutions company in Berkeley Heights.

“They liked the design of their headquarters so much that they are branding and using it all over the country,” he said.

As P.K. Architecture works to complete 6,000 square feet of highly-anticipated luxury residential units in Scotch Plains, Kumar said his designs have and will continue to become much more energy-conscious.

“For example, with the Lisicki Veterans Apartments in Carteret, we turned a dilapidated building into state-of-the-art veterans’ housing using sustainable materials and included solar energy capabilities,” he said.

P.K. Architecture has accomplished all this, Kumar said, with a small team of nearly 10 independent contractors, including engineers, artistic directors, lighting consultants and more.

Kumar said he plans to add to the team with the expansion of his business in the beginning of next year.

“We will continue to bend over backwards for our clients, seeing through each project from conception through construction,” he said. 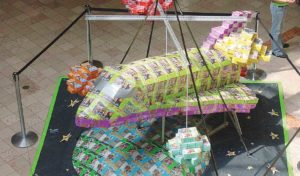 Organized by the American Institute of Architects and the Community Food Bank of New Jersey, P.K. Architecture participated in the “CANstruction” competition in Pennsauken in October, Paritosh Kumar, owner and principal, said.

“People donate large cans of food for the needy and we make sculptures out of them before they are disassembled and distributed,” he said.

Following the competition, Kumar said he was then approached by the Girl Scouts of America to help educate girls in engineering and architecture.

“So, P.K. Architecture worked with a group of about 10 high school-aged girls to create a model of a space shuttle from Girl Scout cookie boxes that was then displayed in the Woodbridge mall,” Kumar said.

Battle of the borders

Paritosh Kumar said he worked in New York City for more than a decade for large architectural firms.

“But working in New Jersey is the difference between night and day,” he said.

In New York, for example, architects can inspect their own projects, according to Kumar.

“But, as humans, they always can miss something,” he said. “I think it is very important to have a third party inspect your projects, which is required in New Jersey. The town inspects everything here.”

Still, while Kumar said he enjoys the cheaper and larger space for his firm in New Jersey, the public is not as aware of the value of architects here.

“People tend to think that, because the contractors are doing the hard labor, they are much more valuable than those who sit in an office and draw,” he said. “That means they often don’t question when contractors charge them huge amounts of money, but even a small fee for us can become a big deal for them.”

Health Care
ROI-NJ Staff -
December 1, 2022
Dr. John Kraus has been named executive vice president and chief medical officer of Otsuka, the Princeton-based company that is a leader in the...

Colliers tapped as leasing agent for Class A office building in...