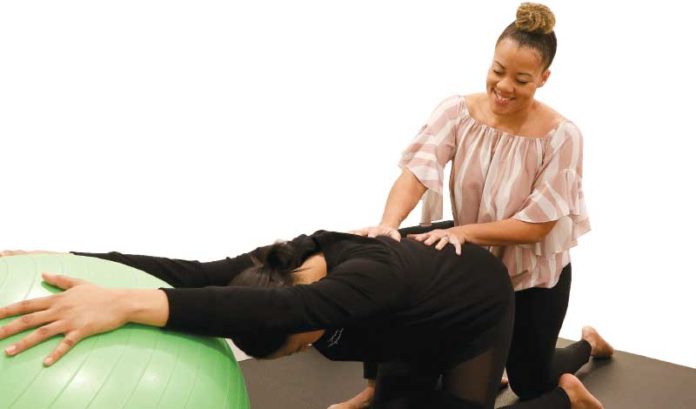 After graduating from Montclair State University in 2006 with an undergraduate degree in dance, Hakika Wise worked professionally as a dancer and actress in New York City.

“But I got sick of being a starving artist,” she said.

She said she also wanted to have better control of her schedule in order to raise her infant son.

So, Wise polled her family and friends.

“I asked, ‘Should I start a business, or should I go back to school?’” she said. “They said, ‘You have no money; no clients; and you know nothing about business.’ And that all made sense.”

But life is short, Wise said, and she had no intention of living a life directed by others.

So, she started a business: Kika Stretch Studios.

Wise felt she could fill a niche no one else was in: teaching people how to stretch properly.

“Our coaches help take away the tension that has been trapped inside your body for years,” she said.

Kika Stretch Studios, one of the first assisted stretching studio concepts in the country, opened its fifth franchise location last month in Short Hills, with two more expected in the state before the end of the year.

This year, the business is expected to surpass $1 million in revenue — and Wise is ready to share The KIKA Method with the nation.

She also is looking to work with and support more entrepreneurially-minded women and minorities like herself in New Jersey.

“I want people to read my story and understand that, sometimes, you don’t need a large amount of money to start working toward your dreams,” she said.

She had, however, gumption and determination.

“I always was offended when someone capped my capabilities,” she said. “If someone set a limit for my life, it was my job to prove them wrong.”

She also had a new concept.

Based upon what she had learned about anatomy and physical fitness as a dancer, Wise said, she developed a unique and specialized combination of passive stretching techniques in which an external element, such as a therapist, exerts force upon one’s limbs to move them into new positions.

“Imagine lying on a mat and having someone gently stretch out your entire body for you,” she said. “People are straining their muscles because they are so tight. I help to treat them in the ways a dancer would, by therapeutically stretching tension away.”

Assisted stretching, Wise added, can help reduce pain, especially in the neck and shoulders, as well as stiffness in joints that limits range of motion.

“The benefits of The KIKA Method are mental clarity, improved posture, decreased stress, enhanced performance, improved flexibility and much more,” she said.

To prove her method, Wise began by renting a shared space with a real estate agent for $345 a month and paid $150 to print up marketing materials she said she used to help educate the public about assisted stretching.

“I also hired college students to wear Gumby costumes around the town of Montclair, stretching and giving out brochures,” Wise said. “I mastered the art of guerilla marketing, being that I had no money.”

After six months, the real estate agent asked her to leave the space because she was using it too frequently for her work with clients.

“I guess he thought the idea was a joke and that I would help him pay for the space, but, actually, I started growing clientele,” Wise said.

It was time for a new space. Many new spaces, as it turned out.

Wise said she quickly found a bigger, albeit more expensive, space in 2012 — at $600 per month — in the basement of a Turkish restaurant in Montclair.

“In the summer, you would smell curry and onions through the vents, but my clients still came,” Wise said. “That is when I knew our services outweighed the circumstances.”

Her business earned six figures while located in that basement — until it flooded 18 months later.

Wise then moved into her own storefront in Montclair in 2014, to help further her concept and brand with prospective clients.

“People were starting to believe in us,” Wise said.

Business was going great, she added, and, for the next 18 months, Wise and Kika Stretch Studios enjoyed a great deal of press and a growing roster of clients.

So, Wise took her son on a much-needed and well-deserved vacation to Hawaii in 2016, but, upon her return, said she was led by her brother to discover her studio was on fire — leading her to have to again move into a basement space, this time in a church, for nine months while the studio was rebuilt.

“Still, we never missed payroll and we continued to build clientele,” she said.

Her business happened to be featured in The New York Times while she was in that basement — and people kept calling and emailing her from all over the world.

“I recognized we were onto something that didn’t exist everywhere,” Wise said. “My goal was not to scale; my goal was simply to take care of my family. But I remember when one of my clients said, ‘You have to franchise. You have to offer this to more people.’

“I realized it wasn’t just about me anymore. It was truly about helping people.”

Wise opened the second Kika Stretch Studios in Westfield in May 2015. Locations in New York City (2016), Morristown (2018) and now Short Hills have followed.

At each, 45-minute sessions typically start at $80.

“I am thrilled that my dream for so many years has come to fruition and I have the opportunity to share The KIKA Method and Kika Stretch Studios with businesses nationally,” Wise said.

“Our stretch coaches are thoroughly trained in our own original techniques of unlocking flexibility,” she said.

Two additional Kika Stretch Studios will open in Englewood and Summit later this year, and by the end of the next, Wise said her goal is to open at least 10 more franchise locations nationwide.

“My five-year plan is to open 65 franchise locations,” she said.

“We have income-based programs specifically for women and minorities that allow them to enter into our franchise without needing millions of dollars up front,” she said. “We vet potential franchisees and, if they qualify, we can take them through this process toward franchise ownership.

“Even if you think you’ll never be able to afford it, contact us anyway. You never know.”

Wise said she always will encourage women following in her footsteps to take full advantage of their opportunities.

“Don’t think that it can’t happen,” she said. “You might as well try when you are alive.”

On a recent morning, Hakika Wise, founder and CEO of Kika Stretch Studios, said she sent 20 emails, made breakfasts and lunches, and told her son to brush his teeth — all before 7 a.m. 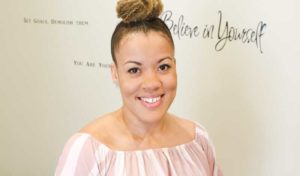 “Sticking to a routine and forcing yourself to wake up early is always something I had to do,” Wise said. “But knowing what your priorities are and not being afraid to put your family first is what I would suggest, because it is possible to handle everything at the same time, even if you are running to the car with a coffee in one hand and a yogurt in the other.”

Wise initially created Kika Stretch Studios in an effort to have more control over her schedule with her son.

“I never wanted the babysitter to see him more than I did,” she said.

Today, Wise said trying to make each day the same while raising her 9-year-old son and stepdaughter is pretty much impossible.

“I’ve come to terms with that,” she said. “You have to deal with unexpected family and employee issues.

“But my routine usually starts with positive affirmations before I even look at my phone, to set my intention for the day. I then work before the kids wake up, take them to school, work until about 5 p.m. and, when that time comes, I’m a mother who looks at her phone as little as possible.”

From fire to franchise

When Hakika Wise, founder and CEO of Kika Stretch Studios, said she decided to franchise, she proceeded to remove herself from the day-to-day operations of the business in order to have the time and creativity to work on the franchise model.

“If you’re weighed down by the daily operations of your business — the paperwork, the phone calls, the emails — and you feel as if you have reached a plateau, it’s time to start firing yourself from some of the things you don’t have to do and to trust your staff to allow them to help you grow,” Wise said. “You’ll make more money, and everyone will be happier.”

Wise said franchising simply was an extension of what she already had successfully accomplished at her studio in Montclair.

“It’s about finding good people and teaching them what you’ve done, which I already had within my own studio,” she said. “So, I believed in my ability to find and teach the right people.”

What she did not realize, Wise said, was how difficult it would be to be a woman franchisor.

“The world does mostly consist of men,” she said. “It is like I have to automatically prove myself and show that I know what I am talking about, and that can be tough sometimes when you are not given the platform others are.”

Still, Wise said, franchising has helped her to help others while growing her own business.

“Especially if you focus on helping people, people are looking for opportunities to invest into a business model that will lead them to financial freedom,” she said. “I didn’t realize there were so many people unhappy with their jobs until they started contacting me about franchise opportunities.

“It’s cool that we’re helping both our consumers and our owners lead better lives.”