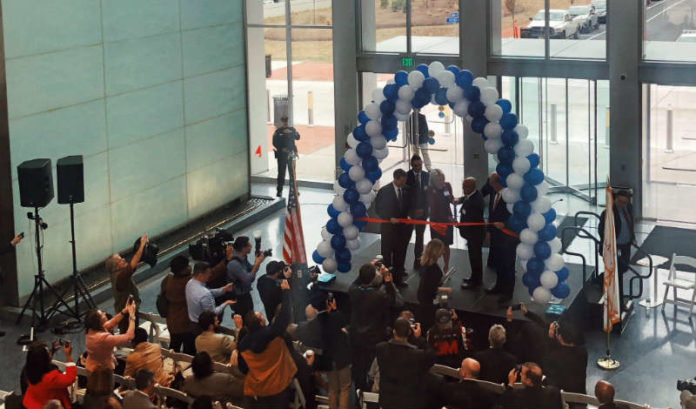 American Water, a publicly traded water and wastewater utility company, celebrated the grand opening of its new headquarters in Camden on Tuesday.

The ceremony was held at One Water Street on the Camden waterfront with employees, local residents, business and industry leaders, elected officials and dozens of students from the Camden City School District.

The company said a $200,000 donation for STEM education was provided by the American Water Charitable Foundation at the ceremony.

“Our move to Camden is an opportunity to contribute to the continuing revival of this great city, a community in which we have provided water service and invested in for more than 125 years,” Susan Story, CEO and president of American Water, said. “At American Water, we keep life flowing – both by investing in Camden’s youth and the region’s future economic prosperity, and by providing clean, safe, reliable and affordable water and water services to our customers in Camden and across the United States.”

American Water said it is entering into a voluntary Community Investment Agreement with the Office of the Mayor to promote community education and outreach, job training programs, and hiring initiatives at its new headquarters.

“American Water doesn’t just talk about wanting to be a good corporate steward – their actions make it clear that this is a company that is committed to the future of our City,” Camden Mayor Frank Moran said. “Their ongoing partnership with the City of Camden and investment in the community at large is proof that American Water is an active and enthusiastic contributor to Camden’s renaissance, and we couldn’t be happier to officially welcome them to the neighborhood.”

The new, 220,000-square-foot headquarters, American Water said, is a LEED Platinum building and will have about 600 employees from its various businesses. It will generate about $13 million in construction work for local businesses and jobs for 74 Camden residents.

“The development of this project reflects American Water’s approach to growth – with goals ranging from global to hyperlocal. The construction of this sustainable project was significantly impacted by the support, talent and hard work of the residents of Camden,” William P. Hankowsky, CEO and president of Liberty Property Trust, said.

Don’t close branches, rethink their role in the neighborhood