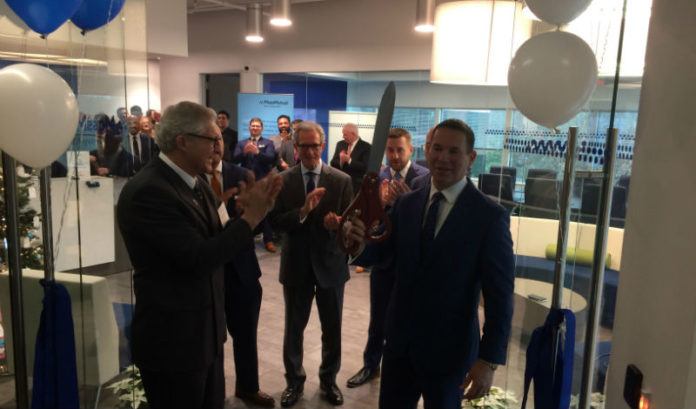 The commute can often be the deciding factor for perspective employees with multiple job offers.

This was the driving force behind MassMutual’s move from Bridgewater to Warren.

“Transportation is a critical issue for us to really recruit millennials today,” President and General Agent Michael Vesuvio told ROI-NJ. “Under an hour (commute) 20, 30, even 10 years ago was reasonable for someone. Today, that key metric is under a half an hour.”

MassMutual celebrated the grand opening of its new office Wednesday.

The company — a general insurance agent of the Massachusetts-based institution, Massachusetts Mutual Life Insurance Co., has satellite offices in Red Bank, Clifton, Edison and Secaucus. MassMutual New Jersey-NYC was founded in 1998 by Vesuvio and his team of 17 founding members as Emerald Financial Resources in Bridgewater.

Vesuvio said the new location, close to both interstates 287 and 78, means a half-hour commute covers a much larger territory than the previous Bridgewater location. This, he said, is how the company will recruit and retain high quality young talent.

Already with several key locations, such as Secaucus, Edison and near downtown Manhattan, Vesuvio said, the location in Warren completes the vision of where the company needs to be.

Vesuvio said the move already is paying off.

“We’re getting really positive reviews on the look and feel of the location,” he said.

Vesuvio believes the building itself has been attracting millennials’ attention. The property, managed by Normandy Realty, houses a restaurant and gym, with a shopping center across the street.

“I think there’s a certain prestige element based upon the quality of the building and the location and the services within the building,” he said. “If you look at the demographics, we’re in a more upscale sort of neighborhood and community which works well for a financial company.”

Vesuvio said the moving process took about a year, start to finish, beginning with initial market surveys. The company knew in December 2017 it would be moving to Warren. Construction began last February.

For Vesuvio, closing one office and opening another without skipping a beat was the biggest challenge.

Warren Township Mayor Victor J. Sordillo was thrilled to have a new business.

“We’re very proud and honored that a great organization like yours selected our town when you had so many places to choose (from),” Sordillo said a crowd of around 35 local government officials, clients and employees. “We are one of the finest towns, not only in New Jersey, but in the entire country.”