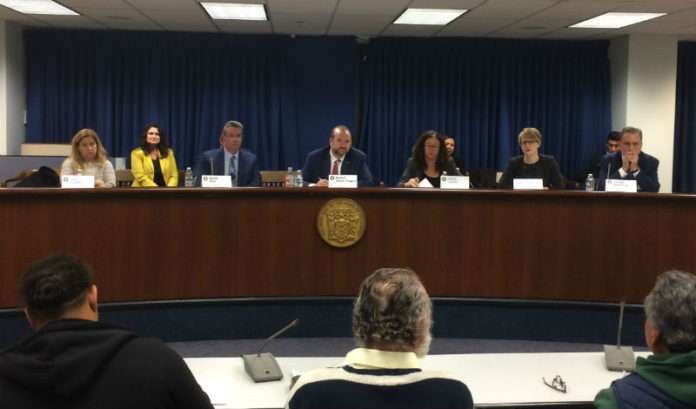 While many brought their worries and hardships, Patricia Smith brought solutions.

Smith — senior counsel at the Manhattan-based nonprofit the National Employment Law Project — broke down the issue of employee misclassification at an event sponsored by the New Jersey Department of Labor and Workforce Development on Wednesday in Newark.

Misclassification is misclassifying workers as independent contractors by filing 1099s rather than W2s. Employers who misclassify avoid having to pay unemployment and disability taxes.

Smith, a former labor official in President Barack Obama’s administration, has been involved with misclassification for more than 20 years. She said interagency, coordinated enforcement; data sharing; a robust public and press outreach strategy; agency cross-training and joint employment; criminal referrals in appropriate cases; and required reports to either the Legislature or governor on a frequent basis are how the misclassification of employees as independent contractors will be remedied.

Labor Commissioner Robert Asaro-Angelo led the forum. He told the room of a few dozen workers, union reps and lawyers that Gov. Phil Murphy gets it.

“We’re at a time in our state where our governor and this administration wants to stand up for the right to protections, for the women and men who work hard and deserve the opportunities and benefits that they are entitled to,” he said.

And while many public advocates came to give their testimony, it was Smith who had the most to say.

Smith refers to coordinated, interagency enforcement as participants from multiple agencies who have an interest in misclassification conducting joint, on-ground investigations of possible misclassification. Smith says this isn’t typically how government works, but there is precedent for it.

Data sharing and making systemic referrals to appropriate agencies is critical because the targeted enforcement of employers who misclassify becomes a real possibility. Target enforcement has proven more efficient than random audits.

Public and press outreach strategies are crucial, Smith said, because it’s important to educate the public on what misclassification is exactly and how it has become a problem. When the public is informed and consistently updated, it’s more likely they provide information to the task force. Smith recommended a hotline, website and/or email address the public can go to when they have questions, concerns and/or advice.

Smith, nominated by Obama in 2009 to be the Solicitor of Labor, served as the third-ranking official in the U.S. Department of Labor from 2009-2017. She has seen the power of government.

She said a few well-placed criminal referrals, especially when really deserved, can go a long way toward deterring other employers from misclassifying.

Smith recommends required reports to the Legislature and/or governor on a frequent basis because it would provide transparency and accountability. Transparency, she said, would allow the public and state to assess the success, or failure, of the task force.

Smith made a point to emphasize that planning is very important, but overplanning can lead to dysfunction. At a certain point, she said, the plan has to be finalized and put into action.

Asaro-Angelo said the issue is big in the state.

By avoiding unemployment and disability taxes, employers who misclassify cost state and federal taxpayers millions of dollars, he said. According to the Department of Labor, more than $80 million in underreported employer contributions have been identified since 2010.

“Misclassification violations can happen anywhere, but those who work in construction, transportation, information technology and other in-demand businesses seem to be the most vulnerable,” Asaro-Angelo said. “That’s why we need to do our part.”

The event was the second of three public forums for the Task Force on Employee Misclassification. The forum provided the public with an opportunity to ask questions and the task force to hear feedback and ideas on strategies to combat employee misclassification. The first was held in Atlantic City in early October and the third will be held Jan. 17 in New Brunswick.

Tech advances force advisers to adjust — or else