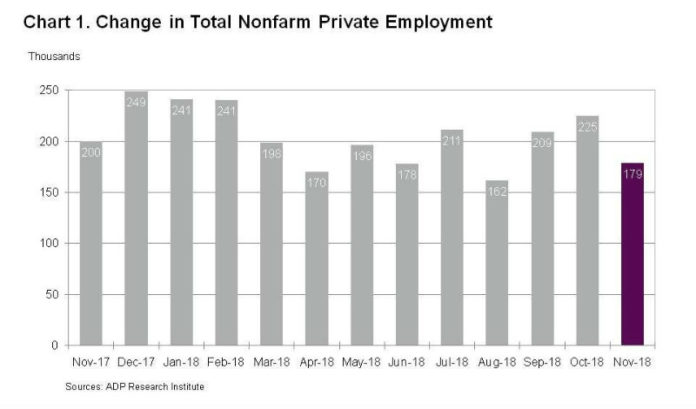 Private-sector employment grew by approximately 180,000 jobs in November, according to Roseland-based ADP.

The payroll and human services company said in its monthly ADP National Employment Report that the number of jobs grew by 179,000 positions between October and November.

“Although the labor market performed well, job growth decelerated slightly,” Ahu Yildirmaz, vice president and co-head of the ADP Research Institute, said. “Midsized businesses added nearly 70 percent of all jobs this month.  This growth points to the midsized businesses’ ability to provide stronger wages and benefits. It also suggests they could be more insulated from the global challenges large enterprises face.”

Under the service-producing sector, professional and business services added the most positions, reporting 59,000 new roles, while education and health services added 49,000, leisure and hospitality added 26,000, trade/transportation/utilities added 18,000, financial activities added 8,000, and other services added 3,000. The only section under the industry to lose jobs was in information, which was down 1,000.

Under the goods-producing sector, construction brought in the most jobs, reporting 10,000 new roles, while manufacturing added 4,000 and natural resources and mining added 2,000.