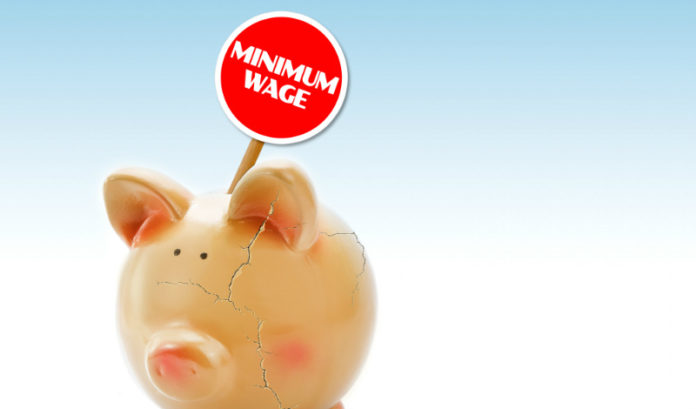 The state could have a minimum wage of $15 an hour by 2024, according to a new bill introduced by Assembly Speaker Craig Coughlin Thursday, which is likely to be heard on December 10.

The bill, a copy of which was obtained by ROI-NJ, increases the minimum wage from $8.85 per hour in January 2019 to $9.50 in July. After that, it would be increased annually, to:

If, at any point, the federal minimum wage surpasses the state’s, the higher amount would be adopted, according to the bill draft.

As anticipated, farm workers and seasonal workers will get different benefits from the bill. They would see smaller increases over a longer period of time and would not reach $15 an hour until 2029.

Employees of small businesses, those with fewer than 10 employees, also would be on the delayed scale.

The bill also addresses training programs and interns and requires employers to make an effort to hire interns after their internships end.

How these provisions are received by the administration remains to be seen.

In a separate interview with ROI-NJ on Wednesday, Lt. Gov. Sheila Oliver expressed concerns over any carveouts for farm workers, saying their work is “back-breaking” and not easy.

In an emailed statement Thursday, Brandon McKoy, director of government and public affairs, said the new bill doesn’t go far enough to relieve New Jerseyans from the burden of a low minimum wage.

“Creating new exemptions in the minimum wage runs counter to the notion of equal pay for equal work and will further exacerbate income inequality by creating a sub-minimum wage underclass,” McKoy said.

“It’s near impossible to survive in New Jersey on a minimum wage salary, and no worker is exempt from that chilling reality. Legislators seemed to understand this two years ago when they passed a $15 minimum wage bill without exemptions, only to see then-Governor Christie veto it. Since then, New Jersey’s cost of living has only risen, and the legislature’s commitment to alleviating poverty has not kept pace. This bill completely dismisses the seriousness of poverty and has the fingerprints of New Jersey’s business lobby all over it.

“Regarding tipped workers, this bill makes the gap between New Jersey’s tipped wage and the minimum wage, already one of the largest in the country at $6.72, even larger as it will be $9.87 once all is said and done. Tipped workers are already at an increased risk of having their wages stolen and being harassed and assaulted by customers whose tips they rely on; this bill does little to help them and heightens many of the serious problems they already face.”

But the bill’s sponsor is convinced otherwise, however.

“This bill addresses the issue of helping New Jersey’s working poor be better able to afford living in the state, while taking into consideration the concerns of the state’s valued small business community,” Coughlin (D-Woodbridge) said in an emailed statement.

“Raising the minimum wage will not only lift up the current generation of low-wage workers, but ensure fairness for future generations and tackle issues of hunger and inequality. “