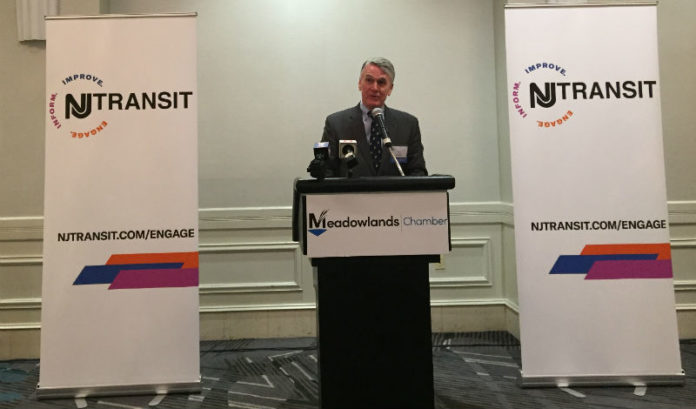 New Jersey Transit Executive Director Kevin Corbett said the state is looking into ways to sell air rights — or development rights — above and adjacent to rail stations in New Jersey.

The idea, which has been floated for years, would be a way for NJ Transit to monetize one of its greatest assets: prime real estate in every municipality where it has a train station.

Corbett, speaking at a Meadowlands Chamber of Commerce event Friday morning, said the process is just beginning, but noted the massive Secaucus Junction station as a place where the process could make sense.

“We’re talking about Secaucus Junction, but we’re (also) talking about some other smaller stations, where we have parking or land and air rights,” he said. “How do we maximize the value, both for us and from economic development opportunities?”

Corbett said it is a natural outgrowth of the growth of economic development around train stations in the past decade — a growth fueled by Transit Oriented Development projects.

“I think along the Morris and Essex, for example, you’ve seen a lot of TOD opportunities that really have changed those towns and helped us with ridership,” he said. “So, I think that was part of the governor’s initiative and part of the new legislation to really not just look at it as selling off surplus property, but how do we really leverage that as a private developer would?

“Secaucus is certainly one of those opportunities.”

Corbett noted the success of the development around the New Brunswick train station as a model.

“I think the (New Brunswick Development Corp.) model that we’ve seen in New Brunswick is a good example of where it works for the community, works with the developer and can also contribute significant funding to New Jersey Transit,” he said.

Officials in the Governor’s Office and Devco did not immediately return requests for comment.

But one person in development said the idea makes sense, noting how the train station in New Brunswick led to more than 1 million square feet of development in housing, retail and parking.

The person said there are a lot of possibilities for such projects — but that the state must make sure to get the right spots for the right reasons.

“They need to look at some of these markets,” the sources said. “Everyone wants to say Secaucus, and that’s great, but you have to look at the Metroparks of the world and other places and say, ‘What uniquely works in the marketplace there, what’s the best value, what’s going to enhance their transportation mission, what’s going to get you the most value?’”

“The real problem is how, mechanically, do they do it,” the person said.

It is a reason why the source said NJ Transit must proceed carefully.

“This is not easy,” they said. “You have to focus and think it through on a variety of uses.”