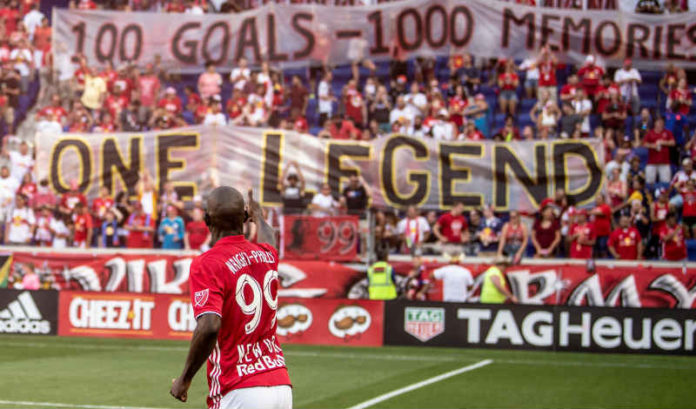 For the New York Red Bulls, an outstanding season on the pitch in 2018 has paid dividends off it, according to the club’s general manager, Marc de Grandpre.

De Grandpre, who has been the Red Bulls’ general manager since 2014, told ROI-NJ that the Major League Soccer team set a record for revenue this season, including seeing growth in critical areas such as ticket sales revenue, merchandise sales, corporate partnerships and more.

That bottom-line success was fueled by an on-field season at Red Bull Arena in Harrison that saw the team win the Supporters Shield for the best record in the regular season — setting a league record for points — while advancing to the Eastern Conference finals in the postseason.

ROI-NJ spoke with de Grandpre about the Red Bulls’ 2018 season and what it meant to the club and its home state.

ROI-NJ: Let’s start on the pitch. Does the team consider this its most successful season, even though it fell short of the MLS finals?

Marc de Grandpre: The accomplishments on the pitch will go down in history as one of our most successful seasons ever, thanks to Sporting Director Denis Hamlett, head coach Chris Armas and, of course, our players. This season, we captured our third Supporters Shield in six seasons and reached the semifinals of the prestigious CONCACAF Champions League.

There were several individual player accomplishments, including four of our own being named to the MLS All-Star Team. Bradley Wright-Phillips became the fastest player in the history of Major League Soccer to reach 100 goals and Aaron Long was named MLS Defender of the Year in only his second season with the club. Nine players who were called up to play on their respective national teams, including Long and Tyler Adams for the United States Men’s National Team.

The foundation is in place to continue building upon the success of this past season.

ROI: How did the team fare from a business standpoint, given the on-field success?

MD: We enjoyed a tremendous year, due to the hard work and effort from the club’s executive leadership team and front-office staff. We generated the highest revenue figures in franchise history this year, which included ticket sales revenue growing by 14 percent. For the first time in club history, we had 100 percent renewal from our marketing partners, and increased the number of total partners by 25 percent. The food and beverage per-caps at Red Bull Arena reached an all-time high, culminating in a total revenue record for the organization.

Merchandise and apparel sales in the Bull Shop, our team store located in Red Bull Arena, increased over 35 percent in 2018, while online sales skyrocketed nearly 55 percent. This is largely due to the team’s success, our fan-friendly players and the pride our supporters have in representing the club with the new red jersey that was released this season after years of fans campaigning for a jersey that reflected the team’s campaigns of ‘Red Together’ and ‘NYisRED.’

ROI: Speaking of marketing partners, the team made headlines this year with an ‘Official Empanada’ — how did that partnership aspect of the business go this season?

Provident Bank (based in) Jersey City became the club’s ‘Official Banking Parnter,’ receiving exclusive naming rights to the fourth- and fifth-floor luxury suite levels of Red Bull Arena — the space is now known as the Provident Bank Suite Lounge. The mutual shared values in making an impact within the community served as a key component in solidifying our partnership with Provident.

Brisas, a family-owned, Elizabeth-based restaurant, created a voice through social media that expanded the brand’s reach to new audiences in both the tri-state area and throughout the country. Brisas was designated first ‘Official Empanada’ of any pro sports team, making national news in the sports marketing industry. Their specialty empanadas have taken on a cult following at Red Bull Arena and sales have exceeded all expectations on match days. The viral social media presence has been unprecedented for a local marketing partner.

ROI: What about the team’s role in the community?

MD: The club continued to make a significant impact in the community, highlighted by our commitment with the U.S. Soccer foundation to open 20 mini-pitches throughout the Newark Public Schools over the next five years. We also received contribution from our entire front office, coaching staff and players during our annual ’11 Days of Service’ initiative, giving our time back to the community for the entire month of September alongside our marketing partners.

ROI: Any longtime visitors to Red Bull Arena can’t help but notice the changes in the neighborhood in Harrison. What role has the club played in those changes, and what benefit is it seeing?

MD: Our organization has been at the forefront of the developmental renaissance in the town of Harrison. The recent opening of the new Harrison PATH train provides improved convenience and access to our venue for our fans on match days. New parking options will be available in the future for fans that drive to Red Bull Arena.

Whether (fans are) coming from New Jersey or New York, we are constantly working to improve the entire fan experience, which has earned the highest ranking for fan experience by JD Power for two consecutive years.

ROI: What does the club see as its current place in the overall New Jersey sports world? Given that it plays in New Jersey, but has New York in its name … is that a hindrance in any way?

MD: The club remains an integral part of the fabric of New Jersey sports. Not only is Red Bull Arena located in Harrison and our training facility in East Hanover, but our team has the most homegrown players on an MLS roster, with five players who are from New Jersey. This is due to the incredible youth training programs the club has established throughout the tri-state area, which bring over 45,000 children into the Red Bulls pipeline — the largest of its kind in all of professional sports in North America. Our fans love the fact that they can root for players that are homegrown, from Jersey, New York or somewhere in the local area.

The club has been in existence for 23 years, and is proud to represent all of New Jersey and the entire tri-state area in promoting and growing this beautiful game. Partners understand the impact we make, both on the pitch and in the community. They have embraced our vision and are true, proud, dedicated partners.

ROI: What about internally — how does your parent, Red Bull, feel about the team these days?

MD: Ownership has always been extremely supportive. They proudly stand behind us in all soccer and business decisions.

ROI: How does the team see the future, from a business standpoint? How do you hope to build on the current success?

MD: This is a prolific time for our entire organization, as we continue to strive to make our fans and partners proud of the club. There are several opportunities being discussed with current and potential partners, including high-profile branding sponsorships with arena naming rights and the jersey sleeve patch.

I also see the opportunity to align with companies and properties in both e-sports and the sports betting space.

We are also continuing to pursue bringing major concerts to the venue, which would introduce new consumers to the quality and convenience of Red Bull Arena.

ROI: Soccer is a sport with a long history, but also one with a youthful fan base. What does that mean for the Red Bulls in terms of advances like technology?

MD: We are eager to find new ways to engage our fan base through technology. This year brought the launch of the club’s first official mobile app. Additionally, we entered and have become leaders in the e-sports space, which has become a fascinating business, especially in the sport of soccer, where the ‘FIFA’ game looms so large.

MD: Our goal in 2019 is to continue to improve every day, to make our loyal fans, partners and community proud of their soccer team.

From rails to trails: N.J. to build 9-mile park that stretches...

Reliving an ‘Obsession’ with ’80s music