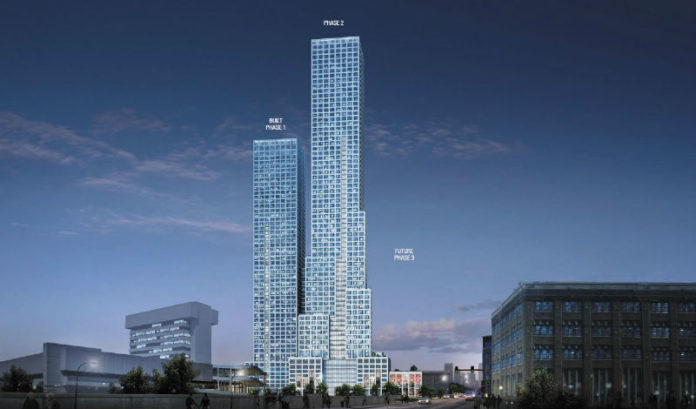 “Journal Squared helps reinvigorate this section of Jersey City,” KRE Group President Jonathan Kushner said in a prepared statement. “It stands as an immense project that will help transform the New Jersey skyline, and bring residents and retail to a completely reimagined destination.”

The first part of the project, a 53-story tower, topped off in 2015, while the third tower, to be built upon completion of the second phase, is planned for 63 stories.

Jersey City-based Dresdner Robin is providing engineering, environmental and design services on the project, as well as construction administration services and work at the Magnolia Avenue plaza and roadway, near the Journal Square Transportation Center.

“Journal Square is in the midst of a major revitalization,” Dresdner Robin’s Tim Lavin, senior project manager, said in a statement, talking about the neighborhood where the Journal Squared project is rising. “Dresdner Robin is assisting the KRE Group in manifesting its vision of transforming the transportation hub into a new destination for living, shopping and enjoying the Manhattan skyline. I believe this district is well on its way to reaching that mark.”

Journal Squared was approved by the city government in December 2012, receiving a 30-year tax abatement and $10 million in bonds. It is the first major development of its kind in decades, KRE Group said.

“There is more investment in this area of Jersey City, and we’re seeing it firsthand,” Lavin said. “Developers are now taking a serious look at this area, and moving forward with plans for development, thanks in part to this multiphase Journal Squared project.”

Huge deal in Newark: Investment group to buy One, Two and...