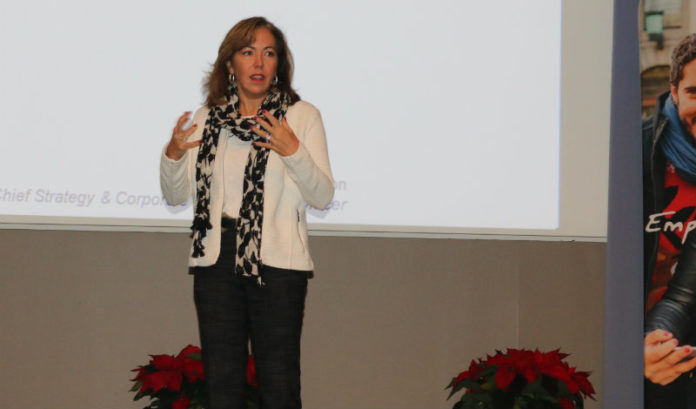 It has been proven, Debbie Hart said, that companies with women throughout their organizations — including in higher-ranking positions — are more successful.

“That is why today speaks directly to our commitment at BioNJ,” Hart, CEO and president of the organization, said. “Our mission is to make sure our members have what they need to help patients, which includes being able to employ strong and successful women in the board rooms and throughout the ranks at their companies.”

More than 100 women with careers in all aspects of science, technology, engineering and math attended BioNJ’s fourth annual Inspiring Women in STEM conference Friday at Sanofi U.S. headquarters in Bridgewater.

Marc Bonnefoi, global research and development transformation leader and U.S. country council representative at Sanofi, said diversity and inclusion, including gender balance, is a strong focus for his company.

“We used to make jokes, for example, when we would have a panel on stage consisting of just one woman for every 10 men,” he said. “But we are not laughing at this anymore. Frankly, if this sort of thing happens now, I am made to feel uncomfortable and must leave the room.

“Diversity is critical to creativity, innovation, business excellence and everything we are trying to develop for the benefit of our societies and patients, and we therefore want to set clear expectations and support women who want to develop their careers with us.”

Dagmar Rosa-Björkeson, executive vice president, chief strategy and corporate development officer at Mallinckrodt Pharmaceuticals in Bedminster Township, began her keynote presentation by saying that, although she was born in San Juan, Puerto Rico, she traveled a lot with her family growing up, to places such as Venezuela, Washington, D.C., and New York.

“That created a comfort with change for me, which I think has served me well,” she said.

“I had a terrific science teacher who would organize field trips to those companies, because exposing young women to STEM fields early on makes them seem more accessible,” she said. “I and all of my close friends ended up choosing careers in STEM, which, I don’t believe was a coincidence.”

Rosa-Björkeson said she then earned her master’s degree in chemistry and her master’s in business administration from the University of Texas before moving to Chicago with her husband to work as a pharmaceutical sales representative.

“As the head of Novartis in Sweden, I got to work with policy makers to develop a deep understanding of socialized medicine market access,” Rosa-Björkeson said. “As an outsider listening to the key priorities of this international group, that was an important teaching moment for me

“But my passions began leaning toward smaller units where I could truly lead cross-functionally and take a more patient-centric approach.”

For example, multiple sclerosis is a disease in which those affected are nearly 80 percent women.

“I was able to better relate to patients, their experiences and the impacts it had on their lives, while also inspiring and guiding our team via my connective and inclusive leadership style, which, some would say is a more ‘woman-like’ approach,” Rosa-Björkeson said.

However, in order to grow further with her career at Novartis in this way, Rosa-Björkeson said she knew she would have to again accept a position in Europe.

“But a lot of women often have a lot to juggle, and, in my case, I was a mother of three and also had elderly parents to take care of and would not be able to move abroad,” she said.

What she did have, however, was a strong career mentor and sponsor set to become CEO of a small biotechnology company who wanted her to join his leadership team, she said.

“The jump from Big Pharma to a small, less structured, more chaotic startup didn’t feel entirely unsafe, because I was linked to someone who knew what I was capable of doing,” Rosa-Björkeson said.

Though Baxalta and Biosimilars, where Rosa-Björkeson served as executive vice president and president, was bought within two years, Rosa-Björkeson said she knew she wanted to remain in small, more transformative spaces.

That is how she ended up in her current role at Mallinckrodt for the last two years.

“As women, we must create a clear voice for ourselves throughout our careers, and it is our responsibility to truly understand what it is,” Rosa-Björkeson said. “Once in a while, maybe we need to ask ourselves, ‘Is this the right role or environment for me? Is it one I can work within or not?’ Hopefully, most of the time, it is, and you can stay, find your voice and help to shape it.

“And, if we have that ability — to help shape the environment that we are in — we also must try and make it as inclusive as possible so that more of our voices can be heard.”

HMH: Community resources program is off to incredibly strong start

Businesswoman Cori Wilf to join board of Saint Barnabas