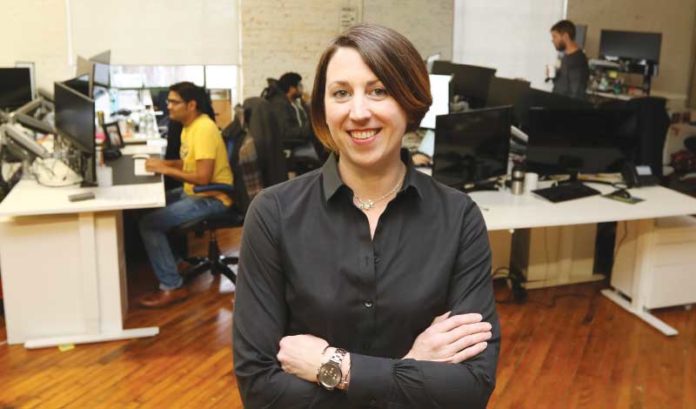 For the eight years Jessica Wooke was a network engineer at a previous company, there were practically no other women beside her.

As a result, she experienced too many awkward situations to talk about, she said. One that comes to mind involved a male colleague talking to her about a massive data center build-out that she was spearheading.

“I was crushing it — on time and under budget — and, so, he said to me, ‘Yeah, but when are they going to start paying you right?’” she said.

“That hurt, because, first of all, how does (he) know what I make?” she said. “Also, it wasn’t like there was going to be any follow-up on that colleague’s part. It was just an affirmation that I wasn’t making what I should — and that wouldn’t change.”

Wooke is now chief product officer at RobustWealth, a Lambertville-based fintech firm where she leads product and technology development.

Are things different in fintech?

The answer isn’t yet clear.

Fintech, an emerging area of tech headed by companies such as Square, Stripe and PayPal, is in an interesting space right now. It’s new, exciting and — Wooke has her fingers crossed — maybe less totally male-dominated.

There has been a spotlight recently shined on the need for more women to get a foot in the door at these burgeoning fintech firms, Wooke said.

“It’s great to see this now, because it has been absent for so long,” she said. “When you look at the middle layer of companies in the fintech sector in the management levels, you see a fair amount of women in director or vice president roles today. Taken as a whole, however, there’s still room for improvement.”

As far as the number of women candidates there are to fill fintech jobs, there’s a growing number — both on the leadership side Wooke mentioned, as well as the technical side. But those dealing with the invisible infrastructure, the technical makeup of a fintech’s product, still lean largely male.

Wooke said her own firm has had more women enter these positions, mostly candidates from recruiting events focused on women in technical positions. She’s not certain that there has been the needed critical mass of women venturing down this career path.

“It’s amazing, because there’s just this diversity of technical jobs out there and I think, if more women got over the stories that they tell themselves, they’d realize they could not only be good at it, but have fun with it,” she said.

For one, the software engineer position could use better female representation, Wooke said. And it’s very much in-demand in the world of fintech, she added.

Kerry Dougherty, a software engineer at Newark-based fintech firm Credibility Capital, is one of the talented women coming to an awareness of that.

But Dougherty didn’t take a straight path to this line of work. She started off in a customer-facing job at an advertising firm before realizing she had shelved a gift for more technical roles.

“And, when I think back on it, I always loved the technical side of things — ever since I was young,” she said. “But, the truth is, adults weren’t helping push me to that. When I’d show a skill at something like math, and start teaching it to those around me, adults would comment that I’d make a great mom or a great teacher.”

Stereotypes weighed just as heavy on her decision to enroll in one of the now-ubiquitous bootcamp coding programs on the internet to get into software engineering.

“I thought this was the kind of career that people who looked exactly like Bill Gates went into,” she said. “So, I had trouble picturing myself in it. But, when I actually got into this workforce, I realized that there were other women as well.”

At Credibility Capital, she’s part of a fintech startup where there’s an equal distribution of men and women on a still very small team.

But she notices some disparity among fintechs in the coworking spaces she commonly works in, which might have a ratio of one woman for every 20 men. She has also been to tech networking events that place her alongside around 500 men as one of only two women in the room.

“It’s in situations like that where I realize that this is what they mean when they say there’s no women in tech,” she said.

The solution to that, she thinks, might be found in new ways of recruiting in the sector that have applicants go through a skills test that strips identifying information from the candidate’s coding aptitude.

“Coding is great that way,” Dougherty said. “You can’t tell from looking at a code what type of person wrote it.”

Top of the tech world

You would be hard-pressed to come up with a more accomplished tech entrepreneur overall than Meg Columbia-Walsh.

She founded and sold five companies, which means she’s started and exited — the norm for a tech entrepreneurial venture — more companies than most executives, men or women.

“The AI space is as disruptive as the web was when it first started,” she said. “Mobile, social media — it doesn’t come close to the disruption that I see.”

There’s a rarity to her story, because there are only just about 6 percent of women at the CEO level in the tech industry, according to a Harvard study. But in a historic shift that should contradict that figure, women now comprise half of engineering undergrads in some of the country’s top schools.

“We have plenty of female engineers (in the tech industry) now, we just need to start promoting them,” she said. “Tech firms need to be filling executive ranks with women. … The talent is there, hiring them is a choice.

Reach Credibility Capital at: inquiries@credibilitycapital.com or 973-718-9100.