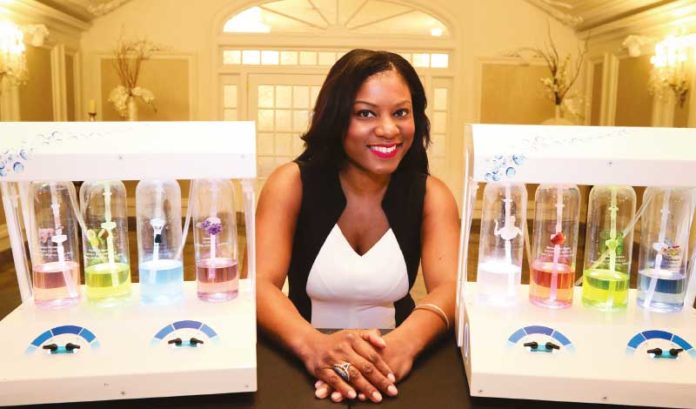 Fadja Robert-Carr said there’s a reasonable chance you have heard of an oxygen bar.

And a better chance you have never tried it. Yet.

“It is still such a novel experience and service for many people,” Robert-Carr said.

That is why the self-described holistic health enthusiast launched into the “quirky yet effective” niche business this year, she said, as owner and CEO of Elevate O2 in Belleville.

“There is so much opportunity for people to try and love things that are new and different,” Robert-Carr said.

Especially in the corporate world, she added.

“They can expect for it to be a hit and the talk of the office party,” Robert-Carr said.

After working at marketing events and product launches for major brands for more than a decade, Robert-Carr founded her own health and wellness company to provide yoga and Pilates and fitness instruction just four years ago.

Elevate O2, she said, is a more focused spinoff into that sort of healthy recreational entertainment.

“We provide people with alternative and amazing experiences for guests outside of the realm of partying,” Robert-Carr said.

Starting with the oxygen bar.

“I experienced an oxygen bar many years ago and it always has been difficult to find again,” Robert-Carr said. “Even now, curious people often ask what it is because it is so colorful and bubbly.”

Each 10- to 15-minute recreational oxygen session provides 95 percent pure oxygen combined with an aromatherapy essential oil. Elevate O2 provides for its guests more than 70 aromatic options, including cherry blossom, strawberry mint, pure lavender and even one entitled the “beach.”

“Some people describe it as an innovative style of hookah, combining pure aromatherapy and oxygen — without the smoke,” Robert-Carr said. “Some people also say it helps to clear their mind.”

Elevate O2 does not make any medical claims, nor does it treat any ailments with its oxygen bar, Robert-Carr said.

“But, if you do your research, you may find out for yourself the health benefits of oxygen therapy,” she added.

For example, oxygen bar fans have touted benefits such as stress reduction, increased alertness and sometimes even the disappearance of headaches and sinus congestion.

Costs for an oxygen bar depend on the number of guests attending an event, the location, and how much equipment needs to be mobilized in order to serve guests over an average of six hours, Robert-Carr said.

“The market rate right now is about $1,900 for an event in the tri-state area,” she said. “That also includes the setup and breakdown, as well as a ‘bartender’ who helps to ‘serve’ the guests.”

Robert-Carr said she currently works with two additional independent contractors, but may be looking to add to her team if she expands outside of the tri-state area.

While oxygen bars often are requested at weddings and bachelorette parties, Robert-Carr said her presence at corporate events is rapidly growing in popularity.

For example, Elevate O2 recently provided an oxygen bar at the Statewide Hispanic Chamber of Commerce of New Jersey’s annual business convention and the Annual Health Exposition in Edison, as well as for Annalect, a data-driven marketing agency, and Kleinfeld Bridal, a bridal dress boutique, in New York City.

“As event planners, what can you do to make your event stand out?” Robert-Carr said. “For example, major corporations at trade shows might provide an oxygen bar at their booth because people will want to sit, talk and mingle.

“It gets people to stay and listen to what they have to offer.”

Robert-Carr estimates Elevate O2 will make, at minimum, $100,000 in profit in 2019, with the demand for oxygen bars only increasing.

Within five years, Robert-Carr said, Elevate O2 would like to be manufacturing its own products for use at their oxygen bar.

“But at this stage, it is more about creating brand awareness and creating more of a demand for our products,” she said. “I also am building relationships with people who do business in emerging markets, especially in air-polluted cities where something like this would be a total gem. In fact, the oxygen bar originated in Tokyo based on that premise.”

Wherever Elevate O2 takes her, Robert-Carr said recreational entertainment and oxygen bars provide a great playing field with lots of room and potential.

“It also is a great opportunity for capital investors seeking to invest in an emerging sector,” she said.

Elevate O2 is designed to look like a bar where one might order cocktails, Fadja Robert-Carr, owner and CEO, said.

But at this bar, the patrons wear nasal cannulas, or single-use pieces of flexible hygienic plastic that allow for a low-flow of oxygen to be directly inhaled through the nostrils.

“I was at a high-end event this past month in which someone said this was not the most attractive accessory they ever wore,” Robert-Carr said.

But everyone gets over that rather quickly, she added.

“Corporate environments tend to be very serious, but, after 10 minutes, people are laughing and talking despite the nasal cannulas,” Robert-Carr said. “It’s fun.”

In planning to design and manufacture her own products, Robert-Carr said she may take such factors into consideration.

“It’s been presented this way throughout the last 20 years, though I may consider coming up with a more innovative design,” she said.