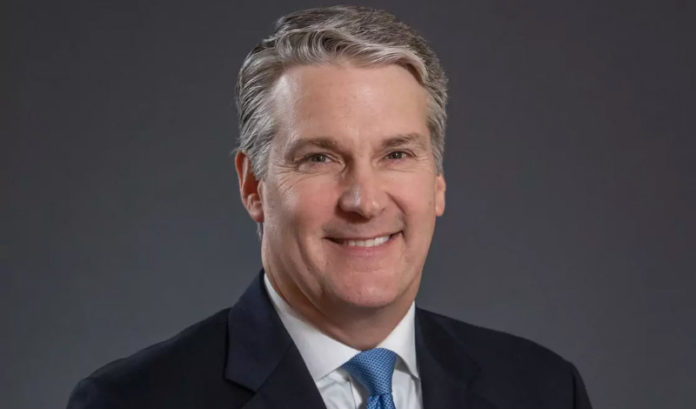 Patrick Leahy will take over as president of Monmouth University next summer, the school’s board of trustees announced Friday.

Leahy, currently the president of Wilkes University, will assume the role at Monmouth on Aug. 1.

Leahy, who will succeed interim President Grey Dimenna, was selected after a yearlong national search by a 17-member search committee that included two students, two administrators, three faculty members, and 10 members of the board of trustees, six of whom are alumni.

“I am thrilled to begin my tenure as the next president of Monmouth University,” Leahy said in a release. “Monmouth has continually demonstrated its willingness to evolve to meet the needs of all students and is dedicated to serving an increasingly diverse student body.

“As we move forward, we’ll build upon the strong foundation here at Monmouth and move toward even higher levels of excellence and access.”

Leahy had served as president of Wilkes University in Wilkes-Barre, Pennsylvania, since 2012.

While he was there, he led the development of a comprehensive strategic plan for Wilkes that focused the university’s efforts and resources on teaching, research and civic engagement.

Monmouth officials said Leahy has been instrumental in over $100 million in transformative campus enhancements at Wilkes, including the construction and renovation of five academic buildings to support learning in the arts, sciences, health care and business. In order to enhance the student experience and strengthen undergraduate enrollment, Wilkes launched seven new NCAA Division III athletic teams and the region’s only collegiate marching band.

This experience impressed Henry Mercer, chair of the presidential search committee and immediate past chair of the Monmouth board of trustees.

“Dr. Leahy is a strategic, entrepreneurial thinker,” he said. “He has a clear understanding of how a private university works and knows how to get visionary initiatives realized.”

Prior to his time at Wilkes, Leahy was a senior administrative leader at the University of Scranton in Scranton, Pennsylvania, from 2004 to 2012. He first served as vice president of university relations, successfully completing a $129 million comprehensive capital campaign. He was then promoted to executive vice president, where he was responsible for development, government relations, undergraduate and graduate admission, intercollegiate athletics, planning and information technology. Leahy also taught in the Business Leadership Honors Program.

Before moving to Scranton, Leahy was co-founder and president of the Business Affairs Forum, a 15,000-member distance learning community based in Ithaca, New York. He has also worked as an investment officer for Allied Capital Corp., as an account executive at Deluxe Corp. and as a development officer at Georgetown University.

A native of Towson, Maryland, Leahy graduated from Georgetown University with a Bachelor of Arts in English literature. He earned dual master’s degrees in business administration and labor relations from Cornell University, where he was a Fried Fellow, and earned his Doctor of Education degree from the University of Pennsylvania.

Leahy and his wife, Amy, have four children: Grace, 20; Molly, 18; Jack, 14; and Brian, 12. They will relocate to Doherty House, the presidential residence, this summer.

Farm to able: Nonprofit is using vertical farming to train adults on autism spectrum to work in agriculture

At some Walmarts, you now can get food, clothing … and career training

Politics
ROI-NJ Staff -
June 18, 2021
The area in Newark that soon will be renamed Tubman Square will include a monument for Harriet Tubman, the pioneering abolitionist, city officials said...

Education
Eric Strauss -
June 18, 2021
The Pingry School, one of New Jersey’s prominent private K-12 day schools, announced it is acquiring the campus of Purnell School in the Pottersville...