Alma DeMetropolis said she gets asked one question more often than others:

“ ‘Is the growth cycle over?’ ” she said. “Volatility in the marketplace tends to be top of mind for people right now.”

Though higher volatility is expected, DeMetropolis, managing director and market manager for J.P. Morgan Private Bank in Summit, said a recession is unlikely.

“Given all the market research we do, we do not think we will have a major pullback of any kind,” she said. “There is no massive bubble to be truly worried about.”

What concerns DeMetropolis today, she said, is helping JPMorgan Chase solidify its presence in a state that she and her company have identified as a massive growth market, with the company adding 50 more branches in New Jersey over the next couple of years.

“We are all-hands-on-deck here,” she said.

ROI-NJ: You’ve worked in nearly two dozen cities on three continents during your more than 26-year career at JPMorgan Chase, but have been strategically focused on New Jersey since 2003, advising high net worth individuals, families, endowments and foundations on a broad range of wealth matters and managing investment portfolios. How have you and your firm grown within the state?

Alma DeMetropolis: When J.P. Morgan Private Bank opened its office in Summit nearly two years ago, we employed nearly 65. Now, we have nearly 90 employees and there are more to come, with space for up to 120. Combined with the nearly 10,000 employees in Jersey City and the nearly 1,800 employees working across more than 200 branches in the state, JPMorgan Chase employs more than 12,000 New Jersey residents. … We are helping to increase skills training here, too, in a big way, with organizations such as Rising Tide Capital, New Jersey Community Capital, New Jersey Institute of Technology, New Jersey City University and, of course, we continue to support major institutions in the state such as the New Jersey Performing Arts Center, Liberty Science Center and the Community Food Bank of New Jersey. … We love being close to our corporate headquarters across the river in New York City and there is a lot of great talent here that we will continue to grow with.

ROI: Can you tell me more about the Advancing Cities initiative JPMorgan Chase recently launched? Will it have any effect on New Jersey?

AD: Advancing Cities is a first-of-its-kind corporate effort to create a new investment fund that will help finance critical projects, help more people benefit from economic growth and leverage outside capital to hopefully invest a total of $1.5 billion in various cities. We are going out to the civic, business and community leaders of our cities to work in partnership with the not-for-profit and private sectors to really advance local economic empowerment. This five-year initiative will focus on equipping workers with 21st century job skills, providing the capital and expertise that women and minority entrepreneurs need to grow their businesses, investing in locally-driven solutions to revitalize distressed neighborhoods and helping families build stronger financial futures. … Though it has not yet been decided if any New Jersey cities will benefit, the model has been proven in cities such as Detroit, Chicago and Washington, D.C., in which we combine our lending and philanthropic capital as well as our firm’s expertise, to make impactful investments. From a corporate responsibility perspective, we continue to try and live, breathe and work in our markets.

ROI: What financial advice do you provide most often for New Jersey residents?

AD: Financial markets can offer a great opportunity to grow wealth, but volatility can make investors uneasy, ushering in feelings of fear. Reacting to market movements may sometimes seem like the right thing to do for the short term — but research suggests that this approach actually diminishes returns, especially when, nearly 75 percent of the time, a pullback of nearly 14 percent occurs annually. … So, while it can be tempting to allow short-term market movements and large-font news headlines to drive your decisions, both our real-world experience and research suggest that can actually work against investors. 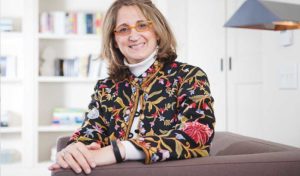 ROI: What might happen to investors if they did, in fact, react too quickly?

AD: In the last 20 years, six of the 10 best days occurred within two weeks of the 10 worst days. And, if you missed the 10 best days in the market over the last 40 years, your annualized return has dropped by nearly half. … For example, people are made nervous by the financial crisis of nearly a decade ago, because, looking at 2008, at one point, the market was down close to 50 to 60 percent. But, if you stuck it out, you actually fully recovered within three years. … You can’t really market-time, and, for people who are investors, you do have to take a long-term view and ride out the waves.

ROI: How much does your financial advice differ for those in various stages of their life cycle?

AD: It’s difficult to think about one’s financial goals in time frames of five, 10, 30 years, but putting them down to paper and thinking about it as more of a quantitative concept rather than qualitative is an important skill, especially when testing them out for both good and tough markets. Then it is all about having the discipline to stay on track and weave those into a future plan. … It’s important these behaviors are put in place early on, whether that be budgeting, risk management or investing, because these skills will be critical for outcomes later on in life. That is why J.P. Morgan Private Bank recently published ‘Teaching Your Children About Wealth,’ a guide filled with exercises that families can complete with their children from preschool through early adulthood, from piggy bank savings and first chores to philanthropic engagement, insurance and investment portfolios. … Our JPMorgan Chase Institute also just recently launched a paper that showed health care spending across America has increased by nearly 8 percent annually. So, as people approach retirement, I really think they need to do the hard work of understanding their budgets and their spending patterns. Some of the old rules of using just 3 or 4 percent of their monies may not apply anymore.

ROI: How about for the dynamic group of family-run businesses in New Jersey? What sort of financial advice do you typically provide them?

AD: As they grow, evolve and are passed on to the next generation, their business models and investment strategies change. For example, we’re in the longest expansion of the post-war era, and many are wondering if recent market volatility is signaling the end of this cycle. Now that we are in this expansion, New Jersey business owners are more seriously considering a liquidity event or a sale. Every business owner has their number in mind — the amount that will let them adequately plan for their lifestyle, spend rate, next-generation legacy and philanthropic structure and strategy — but understanding what a business sale can do for them financially must be thought of in terms of the rest of their lives, assuring their long-term goals. And, given the changes in national and state tax policy, and the monumental importance of a decision such as this, some may even contemplate riding out the next economic cycle to achieve maximum return.

ROI: How much has technology affected JPMorgan Chase’s future plans and products?

AD: New Jersey may, in fact, be the first state in which JPMorgan Chase operates a branch without any employees. So much of what our clients need from a branch today can be done via their mobile phones, so we have heavily invested in technology that allows for immediate and real-time services. … For example, You Invest is an application that is growing both in New Jersey and nationwide. Designed for the everyday consumer, this mobile solution allows people to open an account with a minimum of $2,000 within a few minutes to begin trading for free.

ROI: What financial predictions can we expect through the rest of the year?

AD: As the global economy continues to grow, I anticipate a strong holiday spending season due to increased consumer spending. I think as people finish their tax returns, they will begin to see the impact. The economy may not be exactly where it was six months ago, but from our perspective, we are very much in line with where we have been for 60 years.