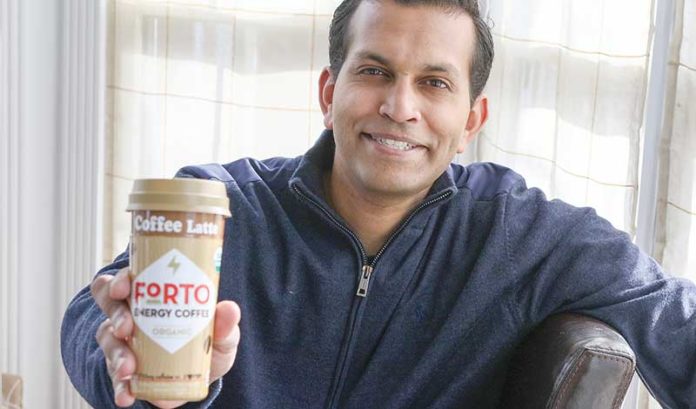 Like any good bootstrapping business enterpriser, Neel Premkumar always is on the move and never off the clock.

In fact, that’s a big part of why he’s a noted New Jersey entrepreneur to begin with. He’s making strides with a grab-and-go caffeine business — funded by money he raised from friends and family — that sounds as if it were designed for busy entrepreneurs like himself.

Premkumar was one of the local recipients of EY’s most recent Entrepreneur of the Year awards. And it’s no wonder he’s attracting attention, because, with FORTO Coffee Shots, he’s facing up to the Herculean task of pushing 5-Hour Energy over on store shelves, as well as replacing brands such as Starbucks as the first in consumers’ minds for quick caffeine fixes. Premkumar even has another beverage brand, Stur Drinks, under the awning of Dyla LLC.

ROI-NJ caught up with this active entrepreneur to hear more about where he’s been and where he’s going.

ROI-NJ: Do you want to start by describing your path to entrepreneurship in the food and beverage sector?

Neel Premkumar: From the beginning, I went right into this industry. After a job at Pfizer, I took on a role at Nestlé running their internal entrepreneurship in their nutrition division. It was about seven years ago that I founded my own company. We started with a brand called Stur, a leading natural drink mix.

ROI: What was the impetus for creating this specific company?

NP: My wife and I have twin girls. When she was pregnant with them seven years ago, she used to get dehydrated; she wasn’t drinking enough water. We went out to find a natural drink mix that she was comfortable putting in her body. At the time, we couldn’t find anything. So, we started making it at home. We used real fruit extracts and stevia leaf and it started tasting really good. We saw an opportunity, because we figured there were others looking for a similar natural mix besides ourselves. That’s what started the business.

And, after that, I was traveling a ton and constantly drinking coffee and energy drinks. Personally, I felt a need to have a quick boost of energy on the go. Similar to the drink mix business, I was looking for something wholesome and organic; again, I couldn’t find it. So, I started blending my own shots of coffee. And so that led to another opportunity: packaging espresso shots, essentially, to take on the go. I got a patent on these little packages and invested all the dollars we had from the other part of the business into this about four years ago. I was taking a big risk. We started out at all the country’s military bases, and now we’re in about 50,000 retail stores across the United States.

ROI: How did you make that connection to the military?

NP: They were our first customer. Through friends I had in the military, I heard a lot of talk about how military servicemen and servicewomen and their families were drinking a lot of caffeine to keep going on a daily basis. And they were drinking a lot of energy drinks as well as energy shots, so we thought this could be perfect fit. We reached out and went down to meet with their commissary program and pitched them on the idea. They loved it.

At the time we did this, I learned through friends, the Department of Defense was working on a report talking about energy drinks and shots and the heavy amounts of sugar in them was not good for the troops. They ended up publishing a report in 2016 about it; it talked about the dangers of overconsumption of energy drinks. And we were really just selling a concentrated shot of coffee — more beans, brewed longer than any other coffee drink on the planet. So, it’s a wholesome way to get energy on the go, which is what they seemed to be looking for.

ROI: You’ve received some recent recognition for your entrepreneurial ventures, but what are some of the challenges you’ve faced in getting your company past its early stages?

NP: Part of it is awareness. We’re spending quite a bit of money on a marketing campaign this year with national advertising. We want to spread broad-based awareness of this product. A coffee shot is unique. We want to educate folks about it; it’s critical for us. That’s our biggest challenge. We have a national partnership with Keurig Dr Pepper, so we’re distributed on the backs of their trucks across the country.

We’ll probably be doubling our distribution footprint into about 100,000 stores in 2019. A challenge for us is taking advantage of that. We need enough folks on the street to take advantage of that network. Another thing is we’ve patented this miniature coffee cup shape. We’re actually the only company in North America producing products with milk under 4 ounces that is shelf stable. So, we’ve got some unique intellectual product around this — and part of the challenge for us how to go about popularizing this concept.

ROI: Where’s the startup at now in terms of size?

ROI: The bigger you get, the more others notice you. How will you continue to thrive in the face of competitors such as Coca-Cola and Pepsi?

NP: Competing with much larger companies with lots of money and distribution is not easy. One of the things I say internally is we can’t match them in money and distribution, but we can work much faster. We can launch a product or idea within a few months and get immediate market feedback on it. If it doesn’t work, we can kill it just as fast. That speed, hopefully, will let us run circles around other businesses.