So, what is the true story?

We went to Jason Pierson, head of Pierson Commercial, to find out.

Pierson, one of the leading retail real estate brokers in the state, has had great success since launching his Marlboro-based firm in 2011. He said he does most of his business in central and northern New Jersey, representing both some of the biggest real estate investment trusts in the state — looking to attract retailers — and more than a dozen national retailers — looking for their next locations.

Pierson is confident retail is strong. And he sees no reason that might change anytime soon. Especially in New Jersey.

ROI-NJ caught up with him recently to find out why.

Jason Pierson: I think retail is very strong, especially in New Jersey. We are one of the most densely populated states, per capita, and the third-wealthiest. If anything, there’s a lack of inventory here. Sales volumes are very high, and they exceed people’s expectations. Certain markets are the triggers, and that’s where retailers initially look, but, over time, as they reach a saturation point, retailers start looking at the secondary and tertiary markets.

ROI: Give us four or five places that are the hot spots for retail right now?

JP: The hottest is Paramus. It’s always the most interesting and the most desirable market for retailers. Clifton is up there, as well. Route 1 Edison and Route 18 East Brunswick are very highly desirable areas with very low inventory, too. If something comes available, it goes very quickly. And I would say the Parsippany-Morris Plains market has been very hot as well.

ROI: What type of retail space is moving the most?

JP: It’s all types. The boxes that are opening up and are getting absorbed. We have smaller shopping centers and regional shopping centers with local mom-and-pops that have very high occupancy rates. And then there’s new residential mixed-use developments that are under construction. So, in general, I think that there’s a lack of inventory and a lot of demand.

ROI: So, why the narrative?

JP: The general public is just not aware. The news might be portraying some place in the Midwest, where there is one Sears that services people from 30 to 50 miles away and that Sears is closing. But that’s not New Jersey. They don’t have the population, they don’t have the income levels that we have.

ROI: Yes, but we’re so crowded, who wants to go out?

JP: The one thing I notice here in New Jersey, just being a resident and having a family, is that there’s a lack of things to do when the weather is bad. So, you look for indoor places to go to. Experiential retail is real; it is what people want to do. They want to go to the jumpy houses, they want to go to indoor miniature golf, they want to go to the movies. So, a lot of these places are expanding. And then there are things that you can’t acquire online that you can get in a physical store. You can’t touch it, feel it, and people still like to have that experience. 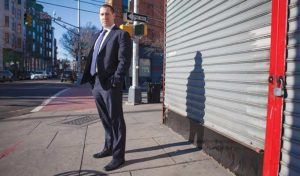 ROI: You mention experiential, or destination retail. Let’s talk about American Dream, the massive project going up in the Meadowlands. (Pierson is not the broker.) It sounds as if you think it’s going to be a huge hit, yes?

JP: I do. I think that it has a stigma of a project that just couldn’t get off the ground. And, for the average person that’s not affiliated with the retail and commercial real estate world, they have no idea what’s going on. But, anytime I mention it to anybody, they have no idea that it is still progressing and opening up within the next year and a half or so.

And, when I discuss the different, family-fun, experiential type of operators that are opening up there, they get excited. There’s nothing like it.

ROI: We know the details: the ski slope, the skating rink, the roller-coaster — and more stores than can be imagined. But why would people leave their current retailers to go there?

JP: You can’t think of it that way. I think it’s going to be more of an experience and a vacation than it’s going to be a one-day stay. And not just residents in New Jersey and New York. I think you’re going to find people from all over the country and internationally going there. When international travelers come to New York, they’re looking for things to do outside of the city.

ROI: Let’s turn to something that there are plenty of: mixed-use projects. It seems to be every project now. Is there still a market for that?

JP: It depends on what the retail is there for. Traditionally, you want to have amenity-filled retailers that service the building. You don’t want to over-retail it. You don’t want 40,000 square feet at the base of the building that is 50 units of residential.

I typically view these not as profit centers for the development, but an amenity. A lot of approvals will require some sort of retail and some more retail than there is demand. This is where some municipalities don’t understand the retail and the real estate aspect of it.

You can’t just put 50,000 square feet of retail and then explain what they want — Starbucks and this and that — it’s just not realistic.

ROI: You mentioned a lack of understanding. That gives us an opportunity to talk about the literally hundreds of planning boards in the state, most of which are filled by local residents who do not have a development background. What would be your message to them?

JP: I think there should be requirements for them to go through an urban planning and a real estate development course. You do have a lot of people on these boards that just do not understand the business aspect or understand the drivers behind a retailer.

They might say, ‘We want Starbucks.’ But Starbucks requires a drive-thru or Starbucks might have one up the road, or it may be a market that just doesn’t support another Starbucks. It could be the demographics or how the access might be, or the parking and so on and so forth. So, they need to understand how things work from a retailer’s perspective.

ROI: You talked about having certain access. Let’s talk about having access for a drive-thru. We’ve heard that’s now an essential requirement for some retailers. Is that true?

JP: With certain tenants, it’s an absolute requirement. Drive-thrus can drive a tremendous amount of revenue to the bottom line. And think about how many days that we have of inclement weather here. I would venture to say that there’s probably at least 100 days throughout the year that is either raining, snowing or so cold that you don’t want to get out of your car and go into someplace. That’s almost a third of the year.

And then there are the people with kids. Sometimes, it’s just such a pain to get them out of the car. It’s just easier. And retailers have gotten a lot quicker with computers and training that the wait times are a lot quicker than it used to be.

ROI: The way it used to be: That would describe the big retail anchors at the mall. The ones, such as Sears, which are going bankrupt. What is that impact?

JP: A lot of the mall developers are excited about getting some of these big boxes back, like a Sears or a Kmart, because they hadn’t reinvested in the space and they were not bringing traffic into the mall or shopping centers. They want to have foot traffic and a vibrant shopping center, because that helps the other retailers and the co-tenants within a shopping center. If you can bring somebody in that brings in people and excitement, that’s going to improve the profitability for everybody in the center.

ROI: Last question: The future — how do you see it evolving?

JP: I think the car and delivery services are going to have a huge impact on retail. You’re starting to see the retailers get creative and having another extension of how they sell the products, where they’re bringing the products to you and not just depending on you coming into the physical location.

I think you’re going to see more and more of that. And, while location is important, it might not always be as important as the product and the services that are provided moving forward.