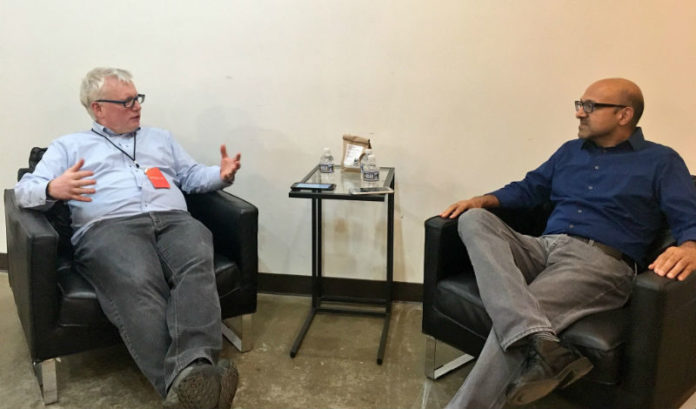 The founder of JuiceTank, a now-shuttered co-working space/accelerator/incubator in Somerset, and a serial entrepreneur, Patel is now teaching entrepreneurship and innovation at Rutgers University at a number of its colleges. He is also working on a project to connect the various resources and universities essential to the tech ecosystem throughout the state through a WeWork-type model.

During his discussion with David Stengle, director of Startup Grind Princeton, Patel covered a lot of ground, including his introduction to entrepreneurship through his family and his work at Rutgers.

However, some of the most engaging parts of his talk described how getting companies started is different here on the East Coast from almost any tech hub anywhere else in the world.

Patel told the audience, “I’ve been a New Jersey resident for 47-plus years, and I believe in the fight, but New Jersey has lost its magic.” Gone are the days of Bell Labs and the amazing technologies that were incubated here, he said. “Now, when you evaluate national rating lists or ask people outside of New Jersey which areas they rate as the Top 10 states to do business in or who they rate as a Top 10 innovative state, they often don’t list New Jersey, or at least not at the top.”

Here are a few takeaways from his discussion.

On the quality of risk capital in New Jersey:

“I think that New Jersey has a lot of the elements for a startup nation, except for a few important ones, including the type of capital available.” On the spectrum of risk tolerance, it is low, he said.

If you meet potential sources of capital in New York, Pennsylvania and New Jersey, a lot of them will talk to you about lowering risk capital, including debt (sometimes requiring a personal guarantee).

Potential sources on the East Coast view risk differently: They are not willing to take on the same spectrum of risk as those in other, more entrepreneurial places.

Patel gave an example of a startup he came across in New Jersey with a dynamite team and a great business model that was building some interesting matching technologies for advertising and mom bloggers, but was unable to raise $150,000 even after having raised $100,000 from friends and family. The startup had been fundraising for a year.

He told that team that they needed to leave New Jersey for California and give it about six months.

When he ran into the founder again two years later at a restaurant in New Jersey, the team had already exited their startup at a good valuation. They had gone to California, put together a dynamite advisory board, raised $750,000 and eventually raised more, and got into the 500 Startups accelerator.

Had they not left New Jersey, “I think they would have had a hard time finding that level of risk capital here.”

On investors’ lack of a sense of urgency:

There is little sense of urgency among investors on the East Coast when it comes to responding to startups, getting the ball rolling and closing the deal.

Patel has been asking startups how long it took from the first time they contacted an investor to closing on a term sheet, and found that it takes far longer on the East Coast than it does on the West Coast.

When he received an introduction to an investor in the California office of famous venture capital firm Andreesen Horowitz, that investor apologized for not getting back to him sooner. It was only seven hours later. This shows a huge difference in mindset.

“If they can’t go from introduction to close in 30 days, they punish themselves,” said Patel. “That’s remarkable. They punish themselves because they didn’t treat their customer, the founder, with a respectful sense of urgency.” We don’t have that attitude here, he noted.

On the pharma industry, noncompetes, legal issues and protectionism:

Pharmaceutical companies are adamant about providing employment with complicated noncompete clauses that waste people’s time and inhibit employees from freely leaving to join a startup.

Practical lawyers sometimes tell people to sign them anyway, without negotiating them, because they’ll never stand up in court.

However, this is generally a waste of time and money.

We want to keep the old established companies from leaving the state.

But this doesn’t encourage the proliferation of startups. “When you look at where the new pharma startups are, many are not here.”

Most law firms in New Jersey don’t understand startups, although a few fortunately do, he said.

“If you look at the law firms on the West Coast, they’ve been giving away a kit for entrepreneurs for 20 years. It has the first set of documents you’ll need to structure a startup,” and they give it away for free, he said.

They even provide an associate to help the startups out, often pro bono, to get them off the ground.

They do this because their culture is conducive to the nurturing of startups with all the resources they need.

“When I go to the West Coast and talk to lawyers, they pull out their cell phones with all of their contacts, and ask me who I want to meet, who I want them to contact for me,” said Patel.

In some ways, New Jersey is 20 years behind, he added, but it’s still worth the fight, as it has all the important ingredients — including human and intellectual capital.