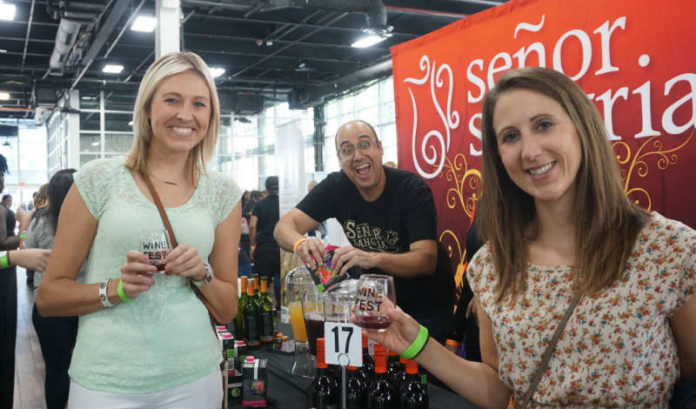 But it’s not for us to question the placement of a ceremonial day. Rather, it’s our job to bring you a New Jersey business story associated with it.

For that, we went to Jersey’s own Rick Martinez, founder of Senor Sangria.

The Maplewood company, which hit the market in 2009 (from the back of his Nissan Pathfinder), will do more than $3 million in revenue in 2018, offering three varieties (red, white and apple raspberry) throughout New Jersey, the Northeast and Florida.

Earlier this week, Entrepreneur.com named Senor Sangria to its Entrepreneur 360 list, a selection of small businesses in the country to watch. The outlet said Senor Sangria has mastered the art and science of growing a business based on five metrics: impact, innovation, growth, leadership and business valuation.

We grabbed Martinez for a quick talk on how his company got started, how it’s doing — and what advice he has for entrepreneurial wannabes. Here’s what he said:

When I started hanging out in Hoboken with my friends, we didn’t have much money. So, to pregame before going out to the bars, I would make some sangria. I wasn’t making it to sell it, it was more of, ‘Let’s get a little warmed up before we go out.’ Eventually, we would all host different parties at each other’s apartments. I wasn’t a good cook at all, so what could I bring? I would whip together some sangria. Eventually, people would reach out and say, ‘Can you make some of the sangria we had at the party?’ Then, it was: ‘Here’s 20 bucks, can you make me a few jugs?’ That’s where the momentum started.

I always wanted my own business. And I was always processing different ideas. I looked at getting into a franchise business and I looked at a bunch of internet companies that I wanted to start. But, for one reason or another, I always found a reason why not to start a business. Typically, it was because I couldn’t figure out how to make money out of the idea. But, one night, my girlfriend at the time — she’s my wife now — was walking with me back from a party. We had a couple of empty jugs of the sangria. She stopped me and said, ‘I’ve got the perfect business idea for you. Why don’t you bottle your sangria?’ And then she said she also had the name for it: ‘Call it Senor Sangria.’

I wasn’t sure. I found all the reasons not to. Then I went to a liquor store a few days later and realized that the bottled sangria on the market was just crappy wine with flavors added to it. It wasn’t anything exciting. It wasn’t what you would have in the Spanish Portuguese restaurant. It absolutely wasn’t what I was making at home. That’s when I said to myself, ‘Maybe Maria’s right, maybe she’s onto something.’

The idea started in July of 2006. It took three years until we actually had a finished product. I learned a lot along the way. I had no experience in the alcohol space other than drinking it. So, I had to figure out how to take something and put it into a bottle and sell it legally. That’s when the journey started. I was Googling everything and talking to every person I ran into that was linked to alcohol. I asked enough people where I was starting to connect the dots. I started to realize I needed to have a packer, I needed to have a winery that makes our stuff, I needed to figure out where to buy the wine from and where to buy the juice. And, oh, shoot, I needed a recipe that’s commercially viable — because the Minute Maid juice I’m buying from the supermarket and the wine I’m buying from the liquor store won’t work. I need something that can be used in much larger quantities.

Eventually, I found a lab in California to start making samples. I needed to see if this is a viable idea, to see if taking fresh juice and mixing it with wine and putting it in a bottle was worth anything. That’s what built my confidence. I was working with the lab to find juice and wine suppliers. And they would send me samples. We would have these parties and we would drink these little bottles and see which one tasted best. It was the ultimate market research. It was such a cool time. I still have one of the bottles on my desk to remind me of it.

My friends, and even distributors, told me I was crazy and that it was a silly idea. I said, ‘I’m going to prove them wrong.’ I think that’s really where the fire was lit. So, I went off, got my wholesale license and said, ‘I’m all in.’ I’ve got to get out there and start knocking on doors. That’s what I did the first year. The product officially came onto market March 20, 2009. In the first year, I knocked on as many liquor store doors as I could. And I walked in with my bottles, poured the product out and said, ‘What do you think?’ I can’t tell you the number of times I got kicked out of stores or how many times I would come home torn apart after visiting 20 stores and being told, ‘No, no, no, no.’ It’s one of those things where you’re just young and silly and you don’t think through everything; you’re just doing it.

At the end of that first year, we had 80 accounts and we had sold about 1,800 cases. But I definitely was confident. People were not only buying it, they were reordering. At the end of that second year, we had 215 accounts and sold 5,000 cases. From there, I brought on distributors. We’ve grown ever since. In New Jersey, we’re up to over 1,000 retail locations. We sell, just in New Jersey alone, over 45,000 cases. And, through that momentum, we’ve brought the brand into New York, Massachusetts, Connecticut, Maryland and Delaware. Last year, we dipped our toe in Florida. Along the way, we introduced two additional styles. We introduced our white sangria in 2011. And, in 2016, we introduced apple raspberry sangria, which is just phenomenal.

For us, it’s about owning our backyard first. While we have over 1,000 retail locations in New Jersey, in Metro New York, which we consider the lower Hudson Valley through the Bronx, Manhattan, all the way out to Long Island, we have about 350 to 400 accounts. We need to conquer that. Once we get up to 1,000 accounts there, and the volume is close to New Jersey, we can figure out Florida. Once we get that going, the juggernaut will get going. But we want to grow organically. We can’t take on tons of investment and go nationwide. I want the growth to be organic and because people really like the product, not because we are throwing it in their face.

There’s a lot of people with ideas, but they’re not making the leap. They are afraid because they think they need to do a big thing, like sell their house or quit their job. It’s not the case.

You might have an idea where you want to make mittens. Then make three mittens and give them to your friends and let them tell their friends, ‘These are the world’s best mittens.’ Then, make another five and sell them. Go slowly. Look at what I did. When I started my first project and was working with a lab, it was an expensive project, but I still had a job.

What I want to share with people is this: If you’ve got an idea, you’ve got to plant a seed. And then slowly grow it. And find the easiest way you can do that. If you want to open a restaurant but you can’t afford to — then make food for your neighbors. If they like it enough, they’ll ask for you to make it again, and they may give you five bucks — or suggest you to a friend who will pay you. And then you grow from there. There are so many ways to circumvent the system where you don’t have to leap in all one shot.