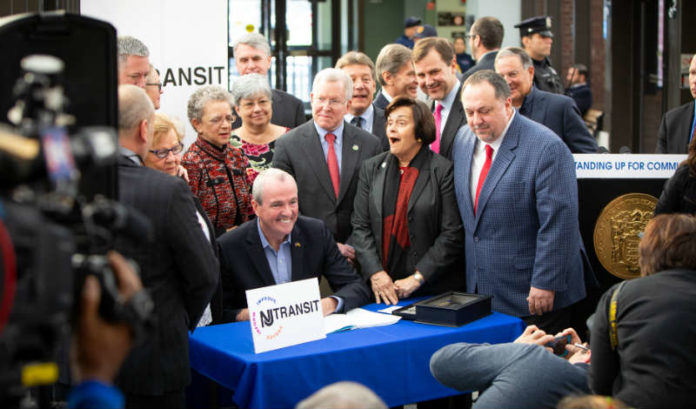 Gov. Phil Murphy has been railing against the state of New Jersey Transit almost since the day he announced he was running for governor.

On Thursday, he took the most comprehensive steps to fix it.

At a news conference at the train station in Summit, one of the major hubs of the system, Murphy announced he has signed a bill that will address five key issues. The bill:

All but Kean are Democrats.

Murphy, at the event, said he is committed to keeping fares as they are until June 30, but would not speculate on how they may or may not be impacted by the next budget.

In a statement, he said he was thrilled this day has come.

“Rebuilding NJ Transit for the 1 million New Jersey residents who ride the trains and buses every day has been a priority since I began my campaign for governor,” he said. “Thanks to our actions in partnership with our colleagues in the Legislature, NJ Transit will now be able to direct its efforts more efficiently and effectively to improve safety, reliability, and services for commuters.

“I am proud to sign a bill into law that is committed to putting NJ Transit on a positive track moving forward.”

Kean, in a post on Facebook, said the legislation will go a long way to fixing issues.

“We’ve been working to ensure that NJ Transit provides the safe and reliable service that our commuters deserve,” he said. “Our legislation that was signed today overhauls NJT’s management and governance to make the organization more effective, transparent and responsive to riders.”

The bill is just the latest in a flurry of announcements regarding NJ Transit.

On Monday, Murphy said NJ Transit had made enough progress on installing a federally mandated emergency braking system to meet its year-end deadline.

This was done by outfitting locomotives, cab cars and tracks with positive train control.

Last week, NJ Transit announced it is buying 113 state-of-the-art cars to upgrade its aging fleet. Those cars, however, are not expected to be in service until 2023.

Weinberg warned Thursday that the impact of the latest bill will not be felt immediately — and will not necessarily be a cure-all.

“This reform legislation is not a panacea for all of the problems that have plagued NJ Transit,” she said. “But it will help NJ Transit’s new leadership deliver the safe, reliable, on-time service its riders have a right to expect by making NJ Transit one of the nation’s most representative, responsive and transparent public transit agencies.

“This new law responds directly to the many commuters who too often felt that NJ Transit had stopped listening to them and caring about their needs, and will make sure that never happens again.”

McKeon said he certainly hopes so.

“This is the reform that NJ Transit needs if it’s to remain accountable to the people of New Jersey,” he said. “What we learned last year was shocking and disappointing.

“NJ Transit has lost its way through a series of bad policy and personnel decisions that left it unable to fulfill its basic duty — get people to work safely on time. Commuters are angry, and rightly so, but, with this new law, we move toward ensuring NJ Transit once again becomes a national model of efficiency and accountability that is answerable to, first and foremost, the commuters.”