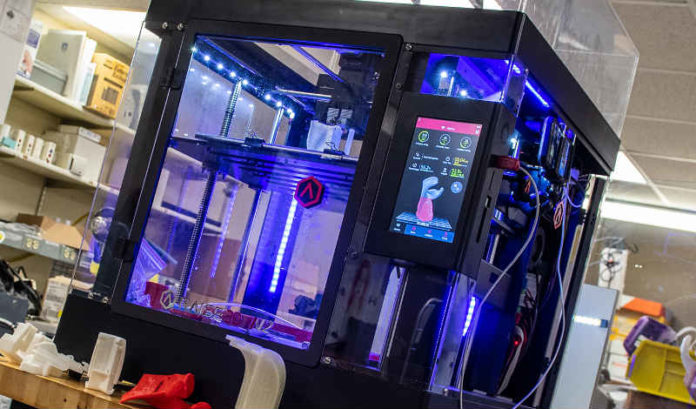 Catheter-associated urinary tract infections are known as a hospital-acquired infection. It’s the type of thing that hospitals get graded on when it comes to quality and patient safety — for reports like the ones that come semiannually from The Leapfrog Group.

To avoid such an infection, the urine bag needs to be at equal level or a lower level than a person’s bladder.

Simple solution: Hang the bag from an IV stand.

But the solution isn’t so simple if the IV stand doesn’t have an extra hook in the right spot.

Option 2 is to find a different solution.

Overlook Medical Center’s foundation purchased a 3-D printer earlier this year and it is already helping to save the health system money.

Prior to the printer, the Summit hospital was using zip ties or taping popsicle sticks (or tongue depressors) onto its 800 stands.

But neither was a long-term solution.

Tape isn’t a good idea for a hospital where everything needs a good scrub down to avoid infections, and a tongue depressor isn’t always going to be able to hold the weight of a full urine bag, according to officials at Overlook Medical Center, which is part of Atlantic Health System.

“It shows up in patient reviews for cleanliness. And, for infection control, you can’t clean tape.”

So, the team members at Overlook began looking at how else they could fix up the 800 IV poles in a cost-effective way.

They tried adding a hardware store hook. But even that was a problem, for three reasons: It compromises the integrity of the stand, it could get in the way of adjusting the height of the stand and it can’t handle the harsh chemicals used in hospitals for cleaning.

“Finally, we thought zip ties could work. They did work, but they just weren’t pretty either,” King said.

That’s when figuring out what to purchase became a real conversation.

But how do you get more economical than a 5-cent zip tie?

The clinical engineering department then started to play a role.

“Atlantic Health is unique, because we have a couple of patents and applications for things we have invented for (ourselves),” said Austin Murphy, director of facilities and clinical engineering at Overlook.

Atlantic Health has touted its AHa! program, which focuses on in-house innovations.

The department had been eyeing a 3-D printer for some time, knowing it could add value to the hospital for things as simple as creating a bumper for the corners of the fragile fiberglass cases used for X-rays.

Vijay Singh, a biomedical engineer at Overlook, said those cases can cost between $5,000 and $7,000 each and can easily break when being moved around.

That’s another solution the 3D printer has brought to the hospital.

Singh and his team, led by Dan Matkovic, manager of clinical engineering, spent several months working on various prototypes of a hook to add to the IV stands that could hold the weight of a urine bag, could be easily removed, would not protrude too far out and get in the way of moving in tight corners or spaces, and could hold a bag in place while being bumped or nudged with the natural movement of a person maneuvering hallways and elevators.

The result is finally ready for testing and is now being used on select IV poles at the hospital.

“Clinical engineering is the bedside support team,” Murphy said. “We’re always trying to make nurses’ lives easier, because patients are our focus. We were really thinking about it from that angle, but there are other financial benefits to doing it as well.”

If successful, it will be used on all 800 poles in the hospital, as well as in the four other hospitals that are part of Atlantic Health, Murphy said.

For 1st time, majority of Americans are now interested in using...