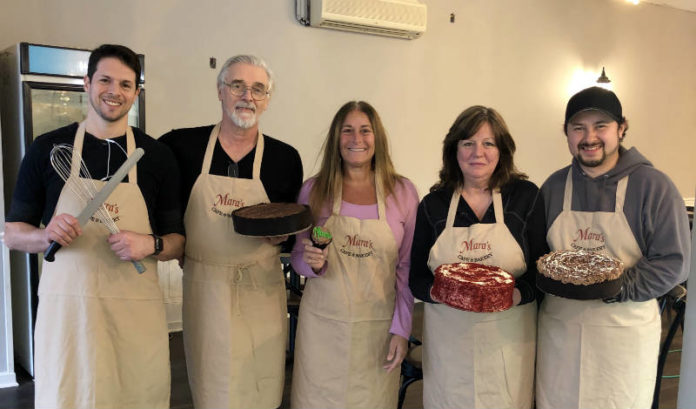 Mara’s Café & Bakery in Denville, a New Jersey staple known for its pastries, desserts and specialty coffee drinks for more than 30 years, will reopen Jan. 9 after being purchased by local businesswoman Allison Kohler-Thomson.

“As a longtime customer, I decided to reopen with a goal to create a dining experience for our customers that we would want for ourselves,” Kohler-Thomson said.

Founded in 1984 by Mara and Glenn Magley to sell homemade desserts and coffee products in the wholesale market, the original Mara’s Café & Bakery opened in 2004, when their sons joined the business and began franchising the concept to nearly one dozen locations, including Fanwood, Berkeley Heights and South Orange.

“The family ran into financial issues with franchising, as many of the locations were poorly mismanaged,” Kohler-Thomson said.

Denville remained as the sole location until Kohler-Thomson discovered on Facebook in July that Mara’s had officially announced it had closed and was seeking a buyer.

“Mara’s Café has always been a staple in my family and, when they closed this past summer, I felt a void in the town,” Kohler-Thomson said. “So, I immediately reached out to them, met with Mara and Glenn, met with an attorney, circumvented the auction to buy the business and closed the deal at the end of August.”

Despite also running events for the company her parents started 47 years ago, JMK Events in Succasunna — including more than 20 food truck festivals per year, such as the multiday, multilocation Just Jersey Food Truck and Music Festival — Kohler-Thomson said she had the bakery up and running by September.

“Events have so many moving pieces, but I’ve been running them my entire life. I can juggle a lot,” she said.

The café, however, needed serious renovations, she added.

“They had a great menu, but not the kitchen to match it,” Kohler-Thomson said.

In addition to the creation of a commercial kitchen, Mara’s Café & Bakery will be able to seat 32 more people, will have the largest outdoor café in Denville, will be a double storefront instead of a single, and will have new floors, tables, pastry cases and more, thanks to Kohler-Thomson’s investment of more than $250,000.

The bakery currently employs nine, including Mara and Glenn Magley, who will continue to bake their famous Pecan and French Vanilla Bourbon pies and caramel apple streusels, and the Season Six winner of “Hell’s Kitchen,” Dave Levey, who will continue his six-year career at Mara’s as lead baker, while assisting in curating the daily café menu.

Kohler-Thomson said she expects to hire more than 20 additional employees for the café, which will continue to offer handcrafted gelato, quiches, sandwiches, salads, soups and more.

The grand reopening on Jan. 9, with a soft opening on Jan. 2, will kick off a buy-one-get-one deal through Jan. 16 between the hours of 5 and 10 p.m. for each group of customers.

“Our tagline is ‘Make Every Day Delicious,’ and Mara’s has been making mine that way for a long time,” Kohler-Thomson said. “I just want to continue to bring people together to enjoy delicious meals with family and friends in a cozy atmosphere.”

More information can be found at www.marascafe1.com.