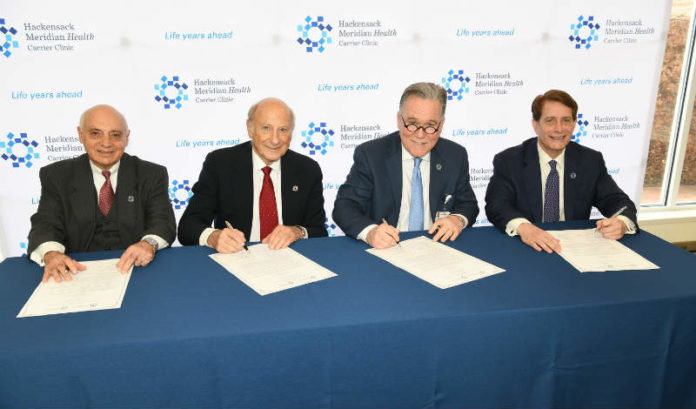 The ink hasn’t dried on the deal that created Hackensack Meridian Health Carrier Clinic on Thursday, but HMH CEO Robert Garrett and former Carrier CEO Don Parker are already looking at the next step in the merger.

“It really sets the stage for the next phase,” Parker told ROI-NJ. “It is beyond urgent care, it is beyond a string of drug and alcohol facilities. (It is) the connection for antecedents to health care and will those social determinants be addressed in a health care fashion.”

Parker said the merger could not happen soon enough.

“Talk about a scattered industry,” he said. “If you think about all the different parties that are working on social determinant issues — and none of us very well — someone needs to organize that. Because, if you go to the countries that have low-cost health care, they have a strategy for social determinants. We have been separated from health care for decades now, and we’ve got to push them back together now.”

But that only helps with the physical integration of services. What Parker is particularly excited about is the validation of his work and the elevation of behavioral health into mainstream health care.

“Hackensack Meridian and Bob’s approach is to give behavioral health a seat equal to the other disease states that we deal in,” Parker said. “That is an enormous risk to do that. But it’s also an enormously bright move to make if you’re going to create parity.

“If you can have your leadership provide parity … on a regular basis, it changes my role and changes what I can do and who I can talk to and what kind of resources are available to me.”

In fact, Garrett said he anticipates behavioral health to be a big topic of conversation at the World Economic Forum in Davos this year. He will be there as a panelist.

“That’s another way to really pay attention to it from an economic perspective,” Garrett said. “Behavioral health is impacting all our economies and it’s important to make this front and center.”

Garrett said social determinants are increasingly playing a role in how health care facilities address population health management — which is the buzz word in the industry for health systems keeping the population in the service areas healthy and out of the urgent or costly health care settings.

“One of the good things we will be able to do at the academic level is to really incorporate that as a big part of the curriculum at the (Hackensack Meridian Health School of Medicine at Seton Hall University),” Garrett said.

“They are already doing (this), the students, when they are immersed in the communities and they are looking at all aspects of social determinants, including the behavioral health issues. I think the other piece we can do and now we have the forum to do is for once and for all get rid of the stigma of mental health. So, when we talk about mainstreaming it … let’s do that.”

Garrett said the approach is similar to how cancer overcame its stigma.

Parker said this is a significant gift to the behavioral health industry.

“It’s psychiatrists that are now going to be trained in a way that is holistic,” he said. “It’s doctors that are going to have rotations as they’re learning their trade to be in an integrated system.”

Garrett said there needs to be more education and awareness to the idea that, in order to keep people healthy, as is the goal of population health, it requires paying attention to behavioral health.

The path that Hackensack Meridian and Carrier have chosen has inspired others to seek similar strategies.

“It’s interesting to see, since we’ve announced this, I’ve had at least a half a dozen mental health centers say to me: ‘We need to rethink what we’re doing. We can’t stand alone,’” Parker said.

“Whether it’s bundled care, or episodes of care or population health management, ultimately, but we need to be on the pathway to that end stage that brings us together.”

Elnahal to leave University Hospital for spot as under secretary at...